Jackie Chan, Chateau Laffitte and a Jar of Penises

Those that know me well might have been surprised to see their favourite blogger crawling out of bed at some ungodly hour ready to see the sun playing peekaboo over the rooftops. But when there’s a free day out in the offing, you won’t see me slouching around in bed. Oh no. Not me!
My employer had organised a weekend away in the far north of Beijing; and at the appointed hour, when I would normally have been far away in za-za land, I could be seen striding manfully to the coach that was to whisk us away to the delights to come.
Our first stop was to be an area some 60kms north of the city centre, called Huairou, which nestles into the hills in Beijing’s ”backyard garden”. To be more specific we were going to a small town called Yangsong which has one or two things going for it, if you read the blurb.
The first thing it has going for it as far as I am concerned is the variety of beautiful - or gaudy, depending on your point of view - street lights that are the equal of anything to be found in Manila – my nominated street lamp capital of the world. 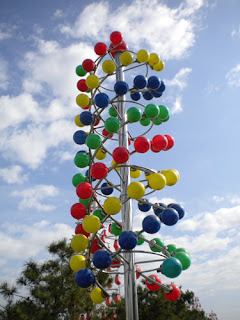 The second thing it has going for it is Feetang World Studio, the home of China Film Group Corporation, the ”most comprehensive and extensive state-owned film enterprise in China”. Opened in 2005, it has visions of becoming the “biggest and most integrated film and television programme production and post production base in the world”. 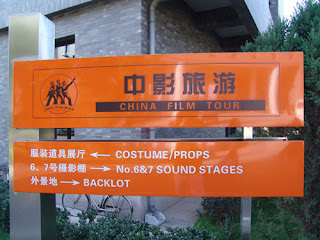 No lesser mortals than Angelina Jolie, Keannu Reaves and Jackie Chan have all filmed here – indeed Jackie is apparently on set as we are shown around the studio lots. But we have a tight schedule ahead of us and I can’t make the time to meet him. Sorry Jackie – you’ll just have to live with your disappointment.
Universal Studios this is definitely not. Instead we are shown room after room filled with costumes and props from a plethora of Chinese classics and other memorable occasions… such as costumes actually worn during the Beijing Olympics … wow! 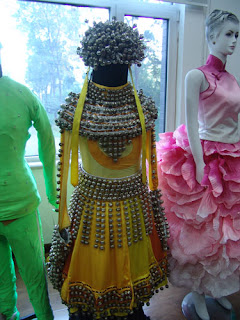 to the outfit worn by ‘Confucius’ in that Chinese classic … 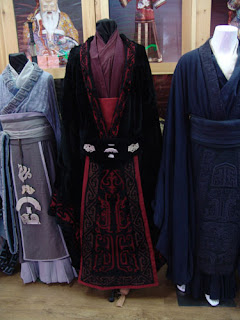 not to mention collections of old radios (and even a typewriter that I’m sure I used to own many eons ago). 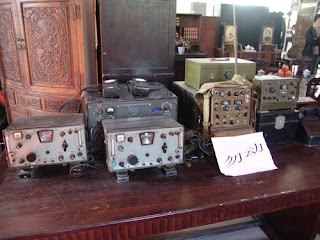 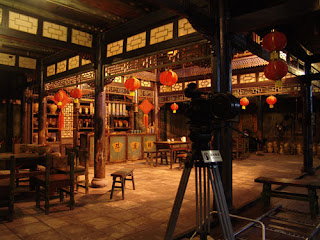 and then to a rain forest… 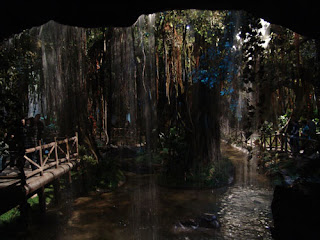 We walk around an open lot representing a street in old Shanghai.

where just metres away they are constructing a polystyrene version of the Dongzhimen Gate in Beijing as it might have looked 150 years ago. 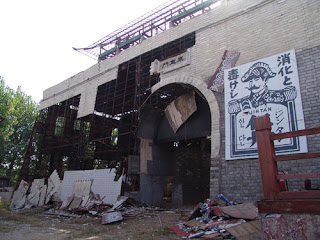 But lest we overdose on excitement, we are whisked away from this amazing living museum and brought back to reality. We get back into the coach and are driven all of 200 metres to a hotel for lunch. It has been hungry work walking through rain forests so we settle our situpons into velvet cushions and wait as plate after plate is brought to the table. Pigs trotters for openers; chicken’s feet; duck livers; tofu; chillied beans; something unmentionable that is brown and sticky; something else unmentionable that is orange and less sticky; pickled cabbage; fish heads with crunchy eyes; and of course rice – all washed down with a bottle or three of Beijing Asahi beer. Oh yummy yummy!
Suitably replete, our next port of call is a classic car museum – all of three minutes drive away. The Beijing Museum of Classic Cars, which opened two years ago, features a collection of 160 cars, with prominence given to famous makes such as Dongfanghong, Fenghuang and Hongqi, as well as some slightly older European models. 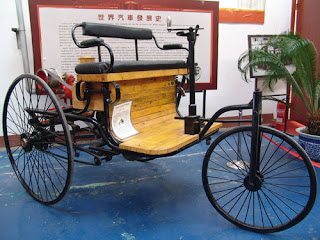 We are shown a couple of Austin 7s and a Citroen Deux Chevaux (sporting a Mongolian number plate) which the Chinese think is so funny. “If you couldn’t get your shopping through the door, you simply lifted off the roof” says Luo Wentao, the private owner by way of our interpreter, and fell about laughing as he must have done on countless other retellings on previous occasions. 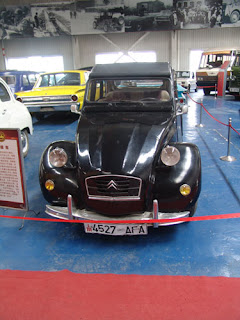 One of Mr Luo’s prized possessions is a cart dating back to the Qing Dynasty – saved from destruction by overzealous Red Guards during the Cultural Revolution by someone cleverly carving in a quotation from ‘The Great Helmsman’ onto the wooden front cross member as the said Guards revered their leader somewhat more than a priceless piece of history. 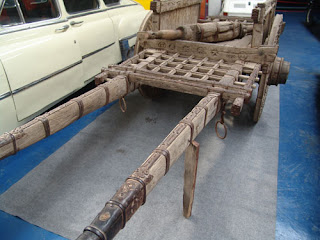 Pride of place goes to various Hongqi (Red Flag) sedans that have ferried famous leaders through the streets of Beijing. 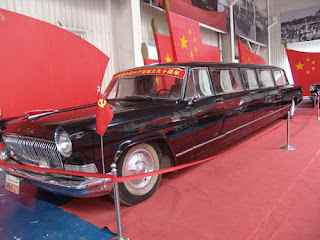 There’s even a car that has carried Mao himself as well as his good lady wife. 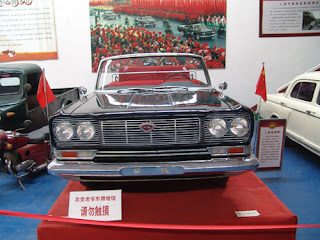 But once again, all good things must come to an end. And with tears in our eyes we are soon hurried around another couple of streets, this time to Beijing Deerworld Theme Park – or should that be factory? The entrance reminds me of Snow World in the UAE’s Umm al Qawain with its plastic sea lions and penguins. Except of course instead of penguins, we have plastic deer in the entrance. 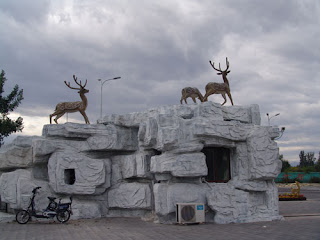 As we enter the estate through the public restaurant, whose menu not surprisingly serves venison as its main (only?) dish, we come across a display of the largest antlers ever chopped off one of these unfortunate beasts and now sits pickled in a large glass cabinet. 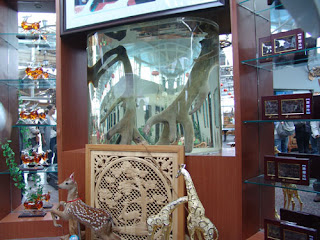 We are reminded that deer antler is everso good for you. It is a common ingredient in Chinese tonic preparations which can be traced back to a set of silk scrolls named Wushier Bingfang, from a tomb dated 168 B.C..
Deer farms started in the mid-16th Century in China during the Ming Dynasty period. Soon after, Wu Kun included a recipe in his famous book Yi Fang Kao (Study of Prescriptions, 1584) which combines deer antler and tortoise shell, plus two bone-like materials rich in gelatine:
Deer antler (lujiao) 5kg; Tortoise plastron (guiban) 2kg ; Lycium fruit (goujizi) 1.5kg; Ginseng (renshen) 0.5kg. This formula is said to replenish yin and essence, tonify qi, and strengthen yang. But all I can think of is that it reminds me of something out of Mrs Beeton: Crack 24 eggs into a large bowl….
To the right of the antlers is a large glass container housing countless deer penises. 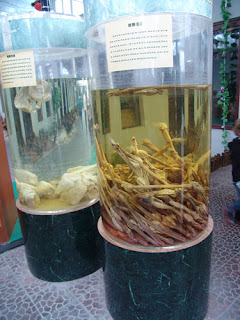 I have to admit that for some unfathomable reason, the study of a deer’s penis is something we were never taught at school. No really. I do feel that I missed out on an important part of my education.
Apparently in traditional Chinese medicine, a deer penis (鹿鞭) is said to have important therapeutic properties and when consumed is also said to enhance male virility and is an aphrodisiac. But for it to retain those properties it must be extracted from the deer whilst still alive. Oh please! The very thought brings tears to the eyes.
During the 2008 Beijing Olympics, the country banned deer penis, turtle blood, and angelica root potions from athletes' diets because it might have contained some sporting no-nos. It joined steroids and amphetamines on the list of banned substances.
Deer penis wine can be sold at around 40 Yuan a glass and often as high as RMB1400 for a two litre bottle. It is claimed to enhance sexual potency in men and to have a warming effect, aiding the joints. (Now why does that claim not surprise me one iota?) 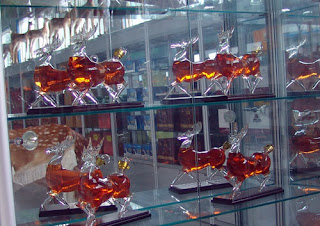 If you want to know what deer penis tastes of, I’m afraid I am the wrong person to ask. But can I recommend this wonderful snapshot of life in Beijing transcribed in 2006 from the BBC’s ‘From Our Own Correspondent’ programme.
With our minds boggling, we are led on through to a number of cages at the back where there are countless antler-less deer talking in squeaky voices waiting their turn to be taken to the kitchen while saving the customers a fortune on viagra. 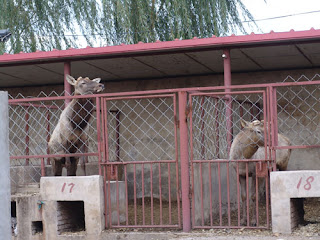 No one feels the need to stay on here any longer than protocol requires; and we happily board our coach once more.
Next on our itinerary is Beijing’s Chateau Laffitte Hotel where we are to stay the night. Sorry, don’t you mean Lafitte? Err… no. Chateau Laffitte Hotel, or Laffitte Chateau Hotel or Chateau Laffiitte, depending on which brochure, sign or TV screen you look at, but not Lafitte.
Now, you can forget Shenzhen’s Window on the World theme park which features a miniature Eiffel Tower. Here you can revel in the splendour of a European style chateau “standing for the essence of the culture of chateau with a pure European taste of classic romance”.

It is based, we are told, on Chateau Lafitte Rothschild with “Fontainebleau Palace styles east and west wings, excelling in its magnificent edifice and splendid decorations where no one can ignore the beauty and attractiveness in this magical chateau that is enhanced by the long row of spectacular Baroque arches, the elegantly decorated carpet flower beds, the pathways paved by snow-white cobblestones and the vividly sculpted statues of ancient Greek Gods and Goddesses!”.

But for some strange reason, as we arrive and look with awe at the splendid chateau on our left…
… our bus turns right, and we pull in to the Laffitte Hot Springs Hotel, reserved for lesser mortals. (Oh, did we say you were staying at the Chateau? Oh dear; we must have made a mistake.) 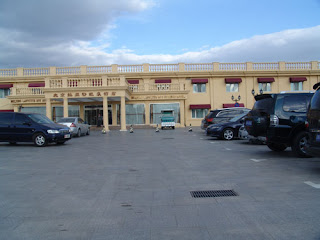 But I have been taught never to look the proverbial gift horse in the mouth. As we exchange our passports for our room keys, I wander down a very long corridor and find my room a few kilometres nearer Beijing than when starting off from the reception area.
Faded Elegance is an expression that quickly comes to mind. Either that or the decorators had knocked back a little too much Tsingtao when they had set to on the room. But the bathroom door works, after a fashion… 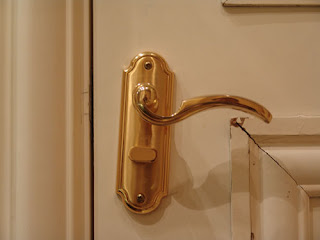 even if the painters had forgotten to use undercoat when painting the doors: 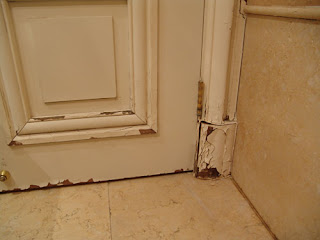 and there is a perfectly divine Ethernet distribution bay when I look inside my wardrobe: 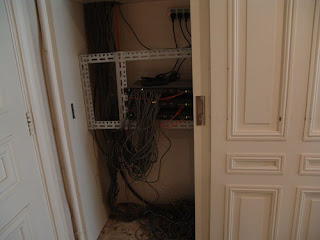 And what is particularly attractive is the mural on one of the walls, though for some reason it has been applied from the bottom up and still has its original musty smell just to add a unique charm to its appearance. 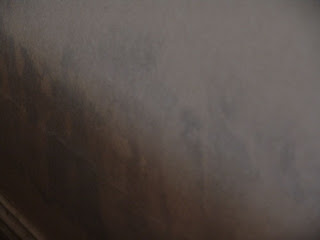 I sleep well that night and the following morning go to breakfast where as well as a full Chinese brunch, they serve toast and jam for the western guests, together with hot orange juice and tepid coffee. One problem is how to spread butter on your toast using the chopsticks provided. But practice makes perfect. It’s the way you hold them that is the key to this conundrum.
Soon it’s time for a quick group photograph before we all climb into the coach to head home. Outside the trees are turning red, signalling that winter is drawing close. 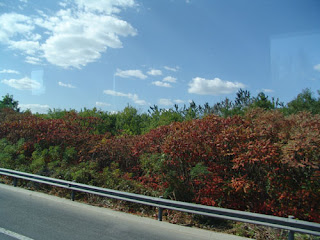 The temperatures are already touching 4 degrees at night time. But inside we amuse ourselves by swatting some of the flies that got stranded here during our visit to Deerworld yesterday. All in all it’s been a memorable weekend.