More than once I asked myself what the hell I was doing and why wasn’t I at home snuggled up in the warm instead of tramping aimlessly in sub zero temperatures through freshly fallen snow.

The fact is that I had set myself the task of discovering the China Railway Museum (中国铁道博物馆) and had even found it quite easily on the map. It surely couldn’t be that difficult to lose a 16500m² building … could it?

The museum is located near the circular test track of the China Academy of Railway Sciences in the NE of the city, not that far from the 798 arts district. So when I saw the Academy from afar and then a sign for the museum itself, I thought I’d be inside and be able to warm myself up pretty fast. 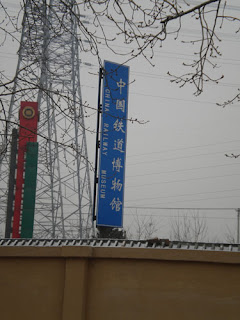 I should have known better. On the other side of this sign there was an arrow pointing down a narrow track towards the museum, so I duly followed to see where it would take me. Following the overnight snow, there were a total of six crunched cars – one of which had obviously ricocheted off another and ploughed straight into a wall. Anxious voices shouted into telephones as a bored looking policeman took down some of the details.

I carried on through the snow and found myself crossing not one, but two railway tracks before finding myself passing a plush building that proclaimed itself to be the Beijing Polo Club. (I didn’t even know there WAS a Polo Club in Beijing!) This couldn’t be right. So I turned on my heals and crossed back over the two railway lines … and saw to my right a turn off with the remains of a gate at its entrance.

I consulted my map again and saw that the museum should have been where I was standing; but as there was a very deserted railway line following the track, I decided to see where it went. 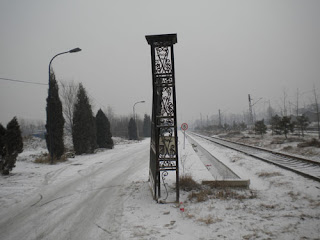 Five minutes later I was still walking with nothing to show for my efforts. However, I have an inbuilt philosophy that always cheers me up when I get lost: it is a damned sure way of discovering a city and seeing places you would never see otherwise! 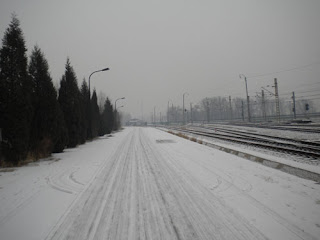 I ploughed on regardless. If I was caught trespassing and given a strict telling off, I would put on my I’m-only-a-helpless-foreigner-and-could-do-with-some-help look which has got me out of many such a situation in the past.

But what was this? A very faded flag fluttering in the blizzard with the name of the Museum on it! 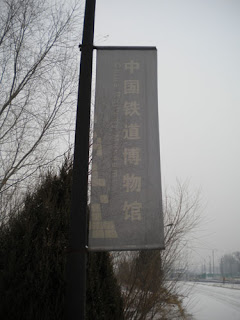 My pace quickened, I rounded a corner and there ahead of me was a large building with rail tracks going up to its walls. Could it possibly be…? 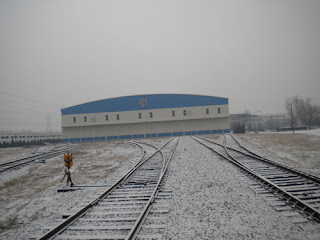 It certainly could! The problem was – where was the entrance? At that precise moment I spotted a man on a bicycle coming towards me. “Bo wu guan na li?” I shouted out to him, with my well rehearsed phrase of atrocious Mandarin, hoping he wouldn’t go into long explanations. Luckily he pointed over to the right and carried on slithering along the track from whence I had come.

Another five minutes later and I found a ticket office, of sorts, from which emanated a hot current of air from a blow heater. Bliss! Before I had even finished uttering a convivial Ni Hao, the girl behind the desk shouted out Er shi kwai at me and was once again deep in conversation with her colleague before I had even had time to get my wallet out. So nice to be made to feel welcome!

I stepped inside the museum. And gasped. I don’t know if it was colder inside or outside. There was one other visitor that I could see. We were outnumbered by staff 4 to 1. My breath froze in the air as I walked towards what was obviously the star exhibit in the place. 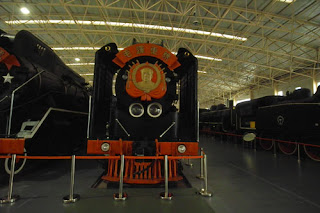 So what? you may well ask. Well … hold your breath now … this train was actually used once by Chairman Mao ZeDong himself. Yes! Amazing isn’t it! The Great Helmsman had actually travelled in this train. And as if to drive home this point, a red and gold badge of honour was affixed to the front of the engine with a snazzy portrait of Mao himself, so that all the visitors could pay due homage to this incredible memento of history.

But wait! At risk of overdosing on superlatives, the train beside it (JF-1191) was another Japanese loco made the following year; and this one had been travelled in by no less a person that General Zhu De - Commander-in-Chief of the People's Liberation Army.

His mug shot was also used to adorn this engine. 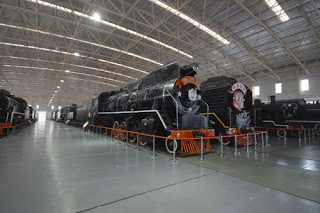 I don’t know what it is about steam locomotives, but they tend to reduce grown men to little boys as they feel they have to touch every knob and lever and marvel at the power of these incredible machines. Well, if you are an overgrown schoolboy, then perhaps this museum is just up your street.

The first railway was built in China in 1876 and the museum houses trains built between 1881 and 1979. They were constructed in China, Britain, the United States, Japan, Russia, France and Belgium.

Opened in 2003, the museum is the national museum of the railway system. Half of the museum's main hall is reserved for steam locomotives, while on the other side of the central divide there are also diesel and electric trains, passenger coaches and freight wagons. In all, there are some 40 locomotives on display.

Actually, there are eight rail lines on which the trains sit, all packed in like sardines in a can. 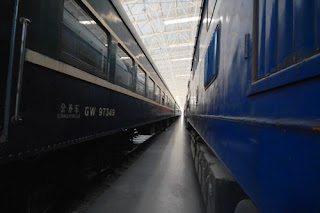 In 1949 China had about 4000 steam locomotives of around 200 different kinds; but it was only in 1952 that China began to manufacture its own engines, based on foreign models. In 1958 manufacturing of diesel locomotives started, but production of steam locomotives didn’t stop for another 30 years, in 1988.

Throughout the museum there are loads of helpful explanatory plaques, with yellow backed translations in English positioned nearby. 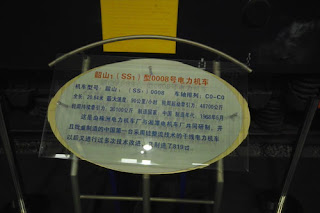 You are allowed – nay, encouraged – to climb aboard some of the trains – such as this cab… 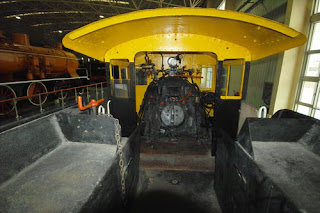 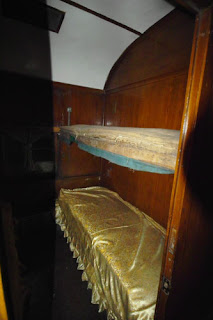 Someone obviously thought it a good idea to paint one of the trains a lurid orange-yellow colour, akin to some of the emergency automobile breakdown rescue vans you see on the roads of Europe. 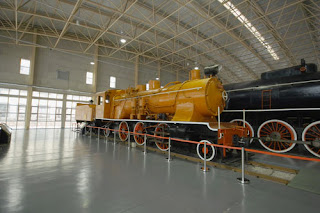 I half expected to round the corner and see that someone had painted another train in a bright fuchsia pink –rather as some of the more excitable Saudis do with their individualised penis substitutes. But in fact the pink had been reserved for no less a personage than Premier Zhou EnLai's personal onboard bathroom! 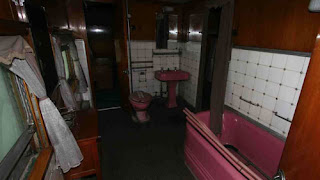 In the middle of the gallery was a cute little loco. Built in Britain in 1882, it’s a Class Zero steam locomotive (with a wheel arrangement 0-4-0 which enables tighter radius curves), one of the two oldest engines used on China's railways and used to ply the route between Tangshan and Xugezhuang. 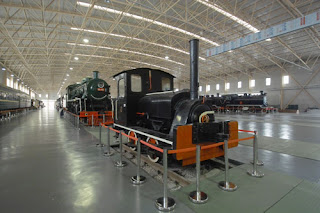 For me (and I suspect for many other “little boys”) the diesel and electric engines are not nearly as romantic as their older brothers. I mean when you clamber into the cab and see a few dials and switches, it is so boring! 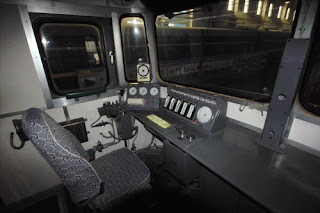 As well as trains, there are also a few glass cabinets with old telephones and switching gear inside (yawn)… 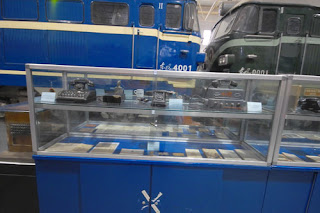 … as well as a sheet of railway bonds (mega yawn)… 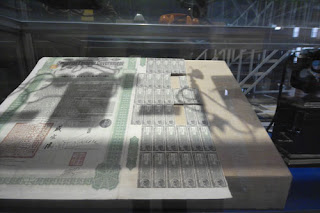 and even a curled up map or two (zzzzzz……) 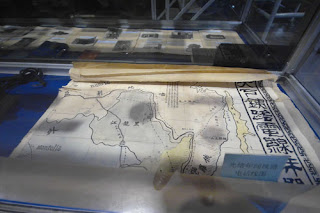 … while the passenger signs are just too wonderful to behold…(snore....) 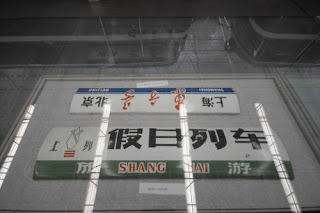 Soon, however, having almost lost feeling in my lower limbs I could tell it was time to go outside once again and see if it felt any warmer. (It didn’t.)

A few old wheels and bogeys had been left idly about in the car park area - one half expected to see a carriage propped up without any wheels on piles of bricks (or “Liverpool Jacks” as they are known in the UK) but there was nothing to keep me hanging about. 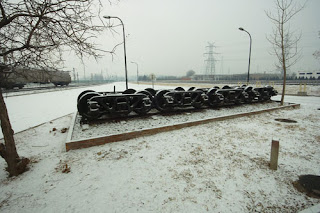 I rounded a corner and discovered that if I had earlier that day ignored the sign telling me to turn right, and gone left instead, I could have entered the museum from the main road about 50 metres away.

I guess I will never get used to the Chinese’ attitude to signs.

It’s a bit like the advice given on one of the sites I looked up that “The China Railway Museum is not to be confused with the Beijing Railway Museum, which was opened in 2008 in the former Zhengyangmen East Railway Station of the Jingfeng Railway”.

But I doubt there is any chance of that. The BRM was actually closed indefinitely more than two years ago and no one seems to know if or when it will ever open again.