Reverse psychology is a wonderful thing. It’s a well known fact that if you want a child not to do something, the very last thing you should say is “don’t do it”.

I well remember trying out reverse psychology on my son when he was around 10-or-so years old. “Try a cigarette”, I said, proffering a packet, hoping he would try one, and end up coughing and spluttering and then swear off them for life. “No way, dad! Don’t you know they’re bad for you?” said my little goody-goody. So much for reverse psychology!

An American called Catherine Price has written a book entitled “101 Places Not To Visit Before You Die”. In it you can read about such must-avoid places as The Seattle Gum Wall, the Montana ‘Testicle Festival’ and Beijing’s Museum of Tap Water. The sales pitch appears to be that Price has taken it upon herself to go to truly awful tourist destinations ... so you don't have to.

The book tells you that in 2001 it was decided that 150 new museums should be opened in Beijing in time for the 2008 Olympics. ‘Hence a museum devoted to the fascinating history of ... tap water. The irony of the whole museum,’ adds Price, ‘is that Beijing's water is not safe to drink from the tap.’

I had to go there. I guess I’m just a big kid at heart. But once I had arrived I had to wonder if Ms Price had ever visited the establishment herself, or had simply read up little fragments on the internet and written her scathing comments accordingly.

The museum is across the street from the Russian Embassy and stands unobtrusively in the middle of the Qingshui Yuan apartment complex. For a start, the Museum of Tap Water is not its actual name in English (it’s called the Water Supply Museum, though on the ticket it is called Waterworks Museum). The Museum of Tap Water is a literal translation from the Chinese. But I guess something called a Water Supply Museum doesn’t have that same humorous ring to it, does it? 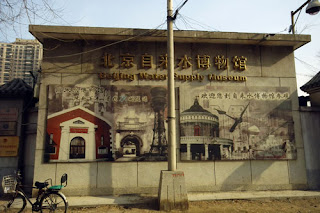 I have to admit to spending over an hour here, which for RMB5 (about £0.50) isn’t bad value. Mind you, I spent a worrisome few moments at the entrance after seeing a notice advising “Alcoholics, disheveled and incapacity or limit the capacity of those without a chaperone decline into museum”. But I hadn’t touched a drop all day, my hair wasn’t that untidy, I was still able to walk, and although I didn’t have a chaperone with me I decided to bluster my way in.

The notice also warned visitors “Please do not climb and lying”; but I really did have no intention of climbing anything and I doubt if anyone there would have known if I was bullshitting or not as no one, of course, spoke a word of English.

The history of Beijing's piped water supply began in 1908, with the founding of the Jingshi Tap Water Co. A year earlier a fire broke out at the Empress Dowager Cixi’s palace and because of a lack of water, the fire got out of control and destroyed many valuable items. Cixi ordered the construction of a water plant to create a more effective way to fight fires that plagued Beijing. A handful of businessmen set up a water purification and pumping station which used a steam engine to circulate the water around the perimeter of the imperial city’s walls.

Unfortunately, the best laid plans of mice and men can so easily come to naught when something like a revolution gets in the way.  The enterprise lasted for only three years, after which time the Qing dynasty was kicked out and everyone had to take a reality check.  But during the Japanese occupation of China during World War II the water plant was revived.

The grounds of the museum, containing the original engine room, are made up of landscaped gardens planted with raspberry trees. A large lawn area, which looks like the grass died a very long time ago, is surrounded by local apartment blocks looking down onto the remnants of what was a revolutionary idea for its day. 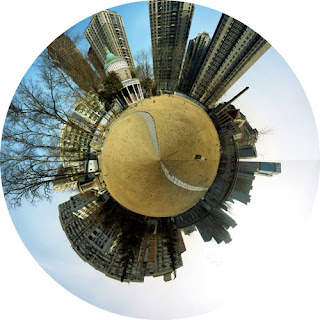 The museum itself, reflecting the influence of western architecture with its principal arch and round stone columns, was originally the steam engine room. It was built of red bricks which were fired in kilns in Germany, and stands as a testament to the country’s early efforts at modernization and collaboration with the West. 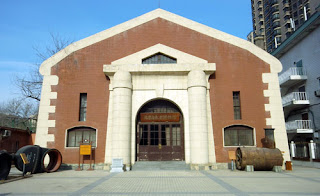 This steam engine room entered service in 1910. With a height of 12 metres it was equipped with two sets of horizontal double-acting plunger steam engines producing 441KW to drive two pumps which in turn distributed 18,700 cubic metres of water per day. Disinfected water was pumped into a water tower and then distributed to the water supply network by gravity.

The museum boasts 130 “real objects” (whatever that means), as well as 110 pictures, 40 models, and a miniature tap water filtration system. The exhibits outside all have English captions; but unfortunately the same cannot be said for the inside of the museum. But then, do you really need a caption to tell you that you are looking at a water meter or a bucket?

Mind you, without the English-friendly notice by this steam storage vessel, I would never have known that it had been put into service in 1910 and only withdrawn from service after electrification in 1931. How much the poorer for that lack of information would I have been then, I ask myself. 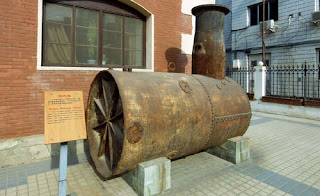 Stepping through the hallowed portal, I am greeted by a second museum guard who insists on stamping my entrance ticket – presumably in case I get the urge to revisit this building while still in the grounds of the museum? Ahead of me lie a series of rooms through which I can wander at will. Amazingly I don’t have to push my way through the milling crowds. In fact, apart from me and him, the building is eerily empty.

On one wall there is a photo of an early president of the company, though I have to say he has more of the looks of a second hand car salesman that a captain of industry. 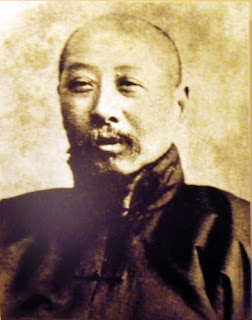 To his left is a photo of some employees of the company in 1948, to which again I can only wonder what they all did all day long. Could we have witnessed a little bit of over-manning then, I wonder? 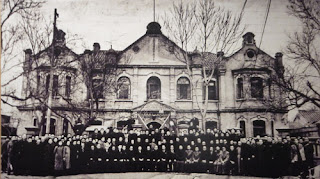 There’s also a photograph on the wall of the giant spittoon-looking vessels that adorn the outside of so many of Beijing’s historic monuments. They, of course, were used to store water in case of fire – old fashioned fire extinguishers, if you like. 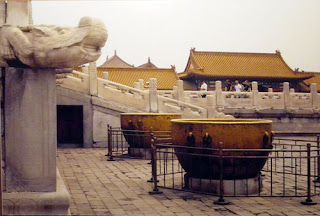 The museum also displays some of the correspondence and official seals relating to the start-up, as well as items marking key moments in the history of the capital’s piped water system, including architectural models tracing its development. 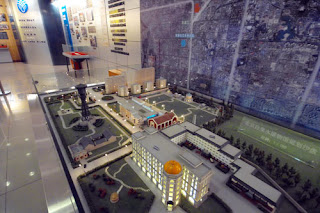 Some replicas of historically significant items were made especially for the museum’s opening in 2003, including an ornate wrought iron water tower which had been built by German craftsmen. Unfortunately the original tower had been dismantled in the 1950s when Mao Zedong wanted to turn the country’s scrap iron into steel to fuel the growth of his new society. 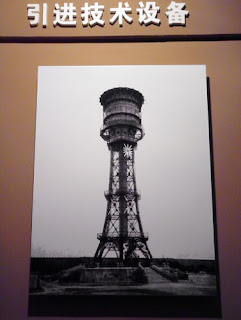 There’s also a display showing buckets of water standing next to a public water tap, which had been stationed at the end of a hutong, or alleyway. By 1910, outdoors taps had been installed all around Beijing, supplying clean chlorinated water. Residents could buy tickets and draw water straight from the taps, or have the water delivered to their homes in wooden buckets on carts.

It is said that when chlorine was introduced to the water, many Chinese were against the idea. The water plant had been developed with European technology, those self-same people who had burned and pillaged the capital just a few years earlier. Unsurprisingly, their product was not too popular to begin with. So the company owners took out ads in papers promoting their “healthy” water saying it was much safer than the well water that had been used till then. Some of those advertisements and some of the water tickets, printed on rice paper and stamped with bright red ink, are on display. 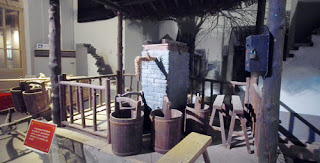 Worried that I might overdose on my education, I mosey outside once again for a walk around the gardens. Ahead of me is the chimney to the steam engine room, which was built in the 1920s.  It is 20 meters high and has eight sides; but what I didn’t know until reading the helpful English signs is that it was built using the traditional Chinese construction method of grouting using sticky rice. 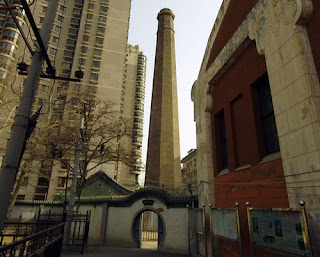 All kinds of jokes spring to mind, but the fact remains that it appears as solid as the day it was built. In 1931 the Beijing water works started to use electric power and the operation of the boiler room and chimney came to an end.

A little bit away from the tower, around the dead lawn, is a replica of the watchmen’s tower, where the night watchmen would pass away their idle hours probably wishing they had something as riveting as CCTV to amuse them. Unfortunately the original was demolished, but this being a museum, anything is possible, so it was rebuilt – though you are not allowed inside. A little bit further on still and you come across the remnants of a water collection pool where water was sent after disinfection. Looking over it is the original intake pavilion built in 1908, still in good condition. One of its main features is a circular pillared temple built as a shrine to the Buddhist goddess Guanyin. Inside the pavilion is a disinfection tank with a white marble Guan yin Bodhisattva standing on a lotus flower. There is also a carved tortoise and snake sitting on either side of the Bodhisattva, though you have to peak through a gap in the padlocked doors to catch a glimpse of them. 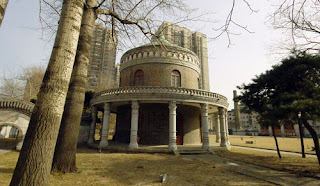 As ever, the museum authorities worry about your safety and throughout the park are advisory notices urging you to be careful. (Mind you, I practically tripped over some rough ground as I came in close to take a picture of the sign for you, my dear blog readers!) 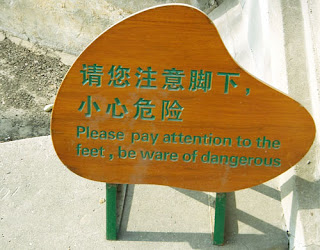 There are also prohibition signs around the place, presumably to keep the McDonalds and KFC crowd under control when the place becomes a heaving mass of bodies in the summer months … or not. 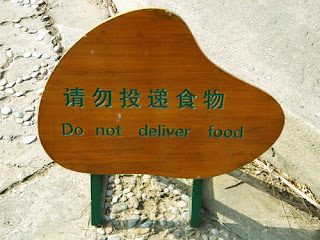 In summary I would have to say that Beijing’s Museum of Tap Water is one of the more unusual tourist attractions gracing the city, assuming, that is, that tourists have either heard of it, or can actually find the place. Certainly I would take issue with Ms Catherine Price. It will surely now find a place on your favourite blogger’s list of places to see in Beijing...before you die.
Posted by Brian at 7:01 PM