The walls at Jianguomen subway station on Line 2 are a dead give away. In common with one or two other Line 2 and 4 stations, you get a pretty good idea what famous monuments are close by looking at the tiles or mosaics that decorate the platforms. 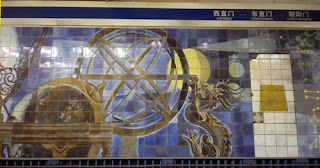 A passer-by strolling to the east of Tiananmen Square might be surprised to see an ancient observatory high up on the top of a fort-like building at Jianguo Gate with some of the archaic instruments clearly visible on the skyline. The Beijing Ancient Observatory (北京古观象台) is a pre-telescopic observatory located just round the corner from exit C of the station.

In 1421 the Ming Dynasty moved its capital to Beijing and the observatory was built along the city wall the following year. (The Forbidden City was also built at this time.) As the Emperor was considered to be the Son of Heaven, the movements of the heavenly bodies were a tad significant, so the Observatory served the Ming and Qing astronomers in their star-gazing reports for the Emperor.

Another of its functions was to assist with sea navigation, and apparently Muslim scholars were recruited for their expertise. However, in the mid 17th century, after winning an astronomy contest, the Jesuit Ferdinand Verbiest was awarded complete charge of the astronomy observatory by the emperor. In 1673, he supervised the rebuilding of some of the instruments; and he and other Jesuits helped to further develop the observations of the stars and the planets.

The observatory is the only surviving example of several constructed during the Jin, Yuan, Ming and Qing dynasties. The observatory itself is located on a 15 metre high brick platform of about 40 x 40 square metres, that is one of the few surviving portions of the old Ming Dynasty era city wall that once encircled Beijing. Several of the ancient bronze astronomical instruments are on the platform, while others are located at ground level

After handing over 20 of the readies to the girl in the ticket office, your first port of call is almost certainly going to be a climb up to the roof to see that array of Jesuit-designed astronomical instruments, embellished with sculptured bronze dragons and other Chinese flourishes. 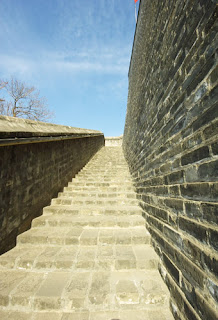 Despite the warning signs, the climb is pretty easy going. I wondered why you only had to mind the step on your way up (and anyway, which step?) but I was suitably relieved to see another notice at the top which read ‘Downstairs Mind the Step’. 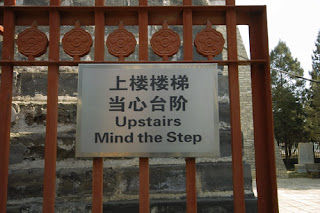 Eight huge but ornately carved bronze astronomical instruments are up here and all have been well preserved since the time of the Qing Dynasty. You can clearly see the meeting of cultures of oriental craftsmanship and European Renaissance in the design of these instruments, which include such classy items as a celestial globe, a dragon quadrant, an ecliptical armilla and an azimuth theodolite. 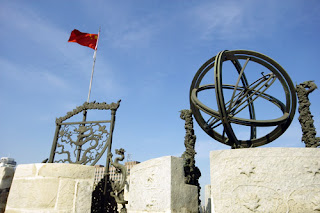 Just in case it has escaped your memory, an Armillary Sphere is an instrument used to measure the coordinates of celestial bodies. It is constructed of two bronze disks — one being known as an ecliptic armillary (for tracking the sun), and the other the equatorial armillary (which tracks other bodies that are not the sun).

The Quadrant (this one built in 1673) was used to measure the altitudes and zenith of celestial bodies.

The Theodolite (built in 1715) was used for measuring both altitude and azimuth coordinates of celestial bodies; whilst the azimuth theodolite similar but lacks the ability to record altitude.

The Astronomical Sextant (made in 1673) measures the angular distance between any two stars less than 60° apart, and is also used for measuring the angular diameter of the moon and sun.

The Celestial Globe (built in 1673) was used to determine the time in which the celestial bodies would rise and set, as well as the altitude and azimuth of the bodies at any given time.

The Altazimuth was made in 1673 for determining the azimuth of celestial bodies.

However, for ignoramuses such as your favourite blogger, who couldn’t tell one end of an armillary sphere from an altazimuth, abridged or otherwise, there are plenty of good explanatory notices explaining all. This, I have to say, is one thing that stands this museum out from all the other 130+ museums in Beijing. The powers that be have gone to a lot of trouble to make things crystal clear, not just for Chinese visitors, but to foreign visitors alike. 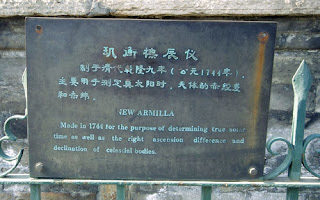 As one of the oldest observatories in the world, the Beijing Ancient Observatory grounds cover an area of 10,000 square metres. Below the stairway to the observation deck stand two magnificent Pi Xiu guarding a former entrance into the grounds. 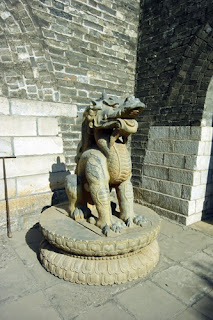 They stare out over an attractive garden to the rear which has sundials and armillary spheres and other contraptions which I feel would grace any lawn.

Well, perhaps not ANY lawn as they’re pretty large it has to be said. But they’re rather cute don’t you think? 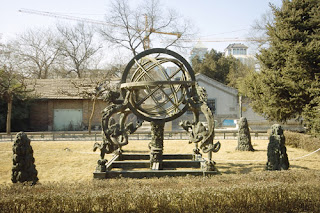 Actually the original name of this place was the Administration of Heaven Observatory. It was changed to Constellation Observatory (or literally 'Platform of Star Watching') in 1442 by Emperor Zhentong of the Ming dynasty and known simply as the Observatory in the Qing dynasty. The name was further changed to 'Central Observatory' after the Xinhai Revolution of 1911.

Two of Beijing’s famous astronomers - Wang Xun and Guo Shoujing, have their busts proudly on display in the garden. Guo Shoujing (1231-1316), below, worked on establishing several astronomical observatories and also devised a number of instruments including an adapted version of the armillary and an improved version of the gnomon and the hemispherium sundial. He also formulated the Shoushi calendar which calculated the year to be 365.2425 days. Clever chap! 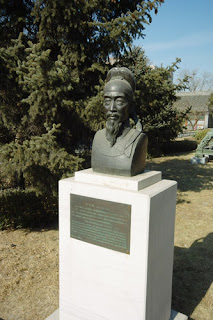 One of the prettiest of the instruments on display (hey, it would look great in my garden… I wonder if they’d miss it…..) is a sundial which is a copy made in 1955 of an original which you can see on the left side of the Taihedian Hall in the Imperial Palace. Four lost pillars were also installed when it was renovated in 1991 in order to restore it to its original appearance. It mainly determines the local true solar time by the direction of the solar shadow, of course. 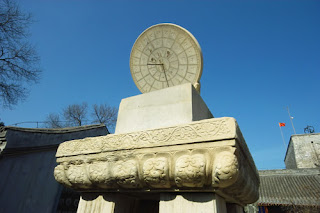 There’s also a rather splendid gnomon (come on you ignorami! - γνώμων is an ancient Greek word meaning "indicator", "one who discerns," or "that which reveals." Hence a gnomon is that part of a sundial that casts the shadow. Hah!) which is a 1983 copy of one made by our friend Guo Shoujing that we met earlier.

By measuring the length of the solar shadow projected on the gnomon at high noon, using pin hole imaging, it determined the winter and summer solstice and the length of a tropical year. 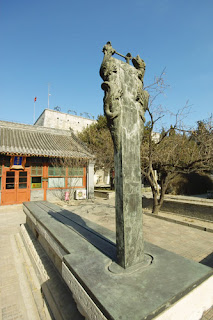 Just around the corner is a Moondial and a Stardial – used to determine time by observing fixed stars or directional changes of the moon. They look very similar … two concentric disks with a vernier in the centre. If it wasn’t for the notice underneath I’d think they were the same. 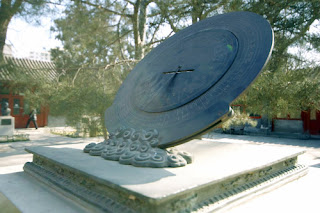 Actually the Chinese were dead clever at this astronomy lark. Apparently from the Yin dynasty to the end of the Qing dynasty more than 4000 observations of comets were made, 90 novas and supernovas were spotted, more than 200 sunspots and more than 1000 solar eclipses.

It must be true. It says so inside one of the gallery museums. And jolly good these galleries are too. Loads of well written explanations, with models and posters rubbing shoulders with some well tended pot plants. 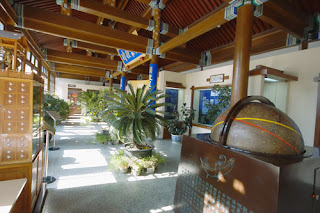 It’s here, too, that you can learn about those naughty French and Germans who looted some of the Observatory’s instruments during the Boxer Rebellion in 1900.

The Frogs took five - the Abridged Armilla, Equatorial Armilla, Ecliptic Armilla, Azimuth Theodolite, and Quadrant – and hauled them back to their embassy; but they probably found it difficult to read the instruction manuals as they returned them all in 1902.

The Krauts, however, took the other five (Armillary sphere, celestial globe, New Armilla, Altazimuth and sextant) back to their country and put them on display in Potsdam Hall. Following a persistent outcry by the Chinese, they were returned to China after the Great War in 1921. 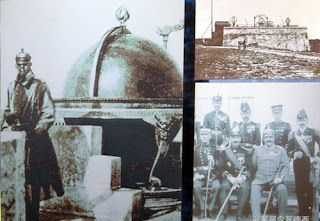 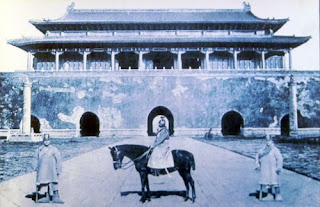 In 1931, some of the more ancient instruments were sent to Nanjing to evade the invading Japanese army, which is why Beijing now has copies rather than the originals. Those in Nanjing can be found at the Purple Mountain Observatory Museum and the Nanjing Museum.
Posted by Brian at 8:33 PM