Who Pinched all the Trains?

I’m confused. No, really; your favourite blogger, whose brain power is surely the envy of many a lesser mortal, has been having a hard time trying to work out whom to believe.

On the one hand Wikipedia – that fount of all knowledge - tells me that The China Railway Museum (中国铁道博物馆), which I visited not many weeks back in the north eastern outskirts of remote BJ, should not be confused with the Beijing Railway Museum (北京铁路博物馆), which was opened in 2008 in the former Zhengyangmen East Railway Station of the Jingfeng Railway, just southeast of Tian'anmen Square.

Only problem is that as the next photo well and truly shows, the museum just southeast of Tian'anmen Square is called the China Railway Museum (中国铁道博物馆)…

Anyway, this past weekend has been totally grismal outside, with a flurry of snow and a grey overcast sky that hardly tempts one to step outside the front door. But your intrepid blogger braves the cold winds and makes his way to Qianmen – admittedly with the intention of going to see Chairman Mao; but Mr Zedong, it appears, has a previous appointment (rumour has it that he is seeing his beauty therapist…again) so his mausoleum is well and truly closed to visitors.

Across the road, the sign for the China Railway Museum rings a clarion déjà vu, and I am tempted inside its portals, if only to see what could be lurking on the other side of the walls.

And this is where I now become doubly confused. For has anyone ever heard of a railway museum that has no trains in it? The more I discover about Beijing, the more you’d think I’d learn not to be surprised any more. But not a single train, carriage or even engine is anywhere to be seen here. This has to be a rail museum with a difference!

The museum is actually spread out across four floors and charts the history of China's railways. A sign near the entrance, though, warns against premature expectations that cannot be met: During the 38 years from the Revolution of 1911 which led to the end of the Qing dynasty to the founding of People's Republic of China, Chinese society with political unrest and depressed economy was faced with troubles at home and aggression from abroad, all of which led to slow headway of Chinese railway industry. With the distribution biased towards the northeast and coastal areas, railway in China has a total length of more than 20,000km till 1949. Because of outdated equipment and backward management, the transport efficiency of Chinese railway was very slow at that time. Well, that’s telling it like it is!

Of course, like every museum in this part of the world, the walls are smothered in photographs; and though few of them have any translation beside them, they are still fascinating to look at. 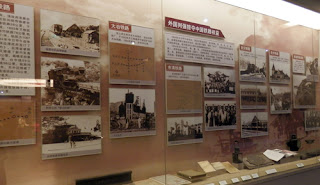 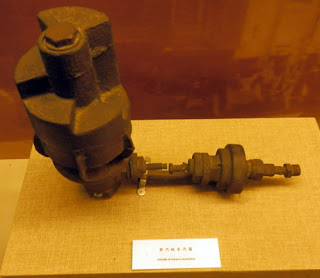 … while the regulations for a Qing dynasty railway company look like heavy reading material. 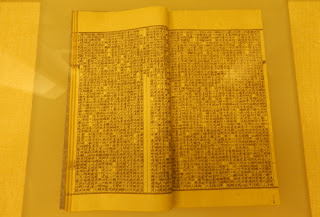 I particularly like a ticket printing machine on display, though, 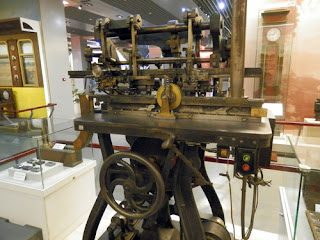 together with some ticket stencils for printing off said tickets… 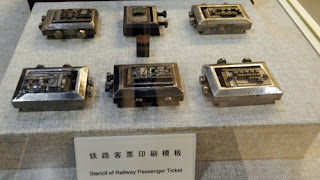 Of course, though there are no real trains here, you would certainly expect there to be a number of models on display; and on this score the museum comes up trumps. Here’s one of a steam loco named after Zhu De - Golly! It looks almost identical to the real train in the other China Railway Museum. How uncanny is that! 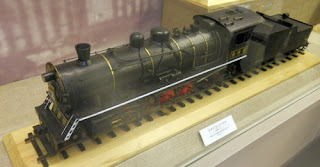 While it would appear that General Zhu De only had one train named after him, Mao Zedong had at least two named in his honour. Here’s a photo of some happy workers posing in 1977 in front of a new diesel loco parked next to Mao’s Class JieFang JF-Liberation No.304 which it replaced. 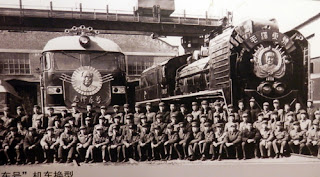 And as if to drive home the point, the loco badge is on display here – a living piece of history if ever there was one! 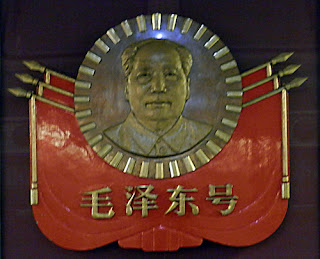 Actually, Mr Zedong is much in evidence throughout the museum. Here’s an original copy of the People’s Daily, dated 1st October 1949, for instance – with the Great Helmsman taking pride of place … 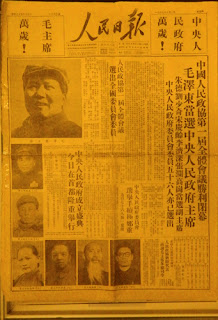 And what’s this? Did Mao have to queue up like all the other plebs and buy his own ticket before boarding his personal train? Unfortunately the caption gives no further details, just mentioning that he inspected Beijing station on 14 Sept 1959… 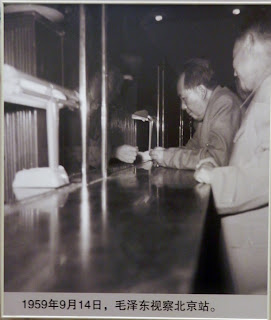 Throughout the museum, the signage – as I have come to expect from so many of BJ’s museums – is immaculate, leaving little room for doubt as to where visitors are not allowed to set foot… 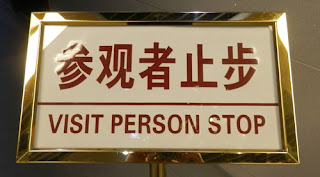 Hey, there’s even part of a clock that was used in the 1990s at one of BJ’s stations. How awesome is that! 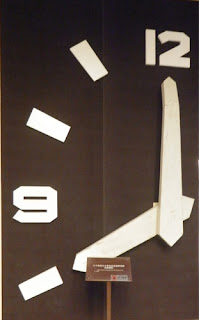 Even though there are no real trains here, someone has thought fit to install a life sized model of a small part of one of the new high speed trains.

But as we have all got used to small-is-beautiful by this time, there is a 1:10 size model of the whole train … errr…actually I count four such models of this train…

though if you miss any of them, you can always buy yet more train models in the museum shop starting at around £50 a pop. 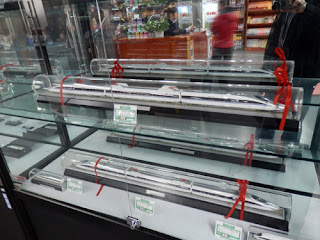 At the end of the museum visit one is left in little doubt about the state of Chinese railways. They may not have any trains in their rail museum, but in this country there is always a reason to be optimistic.