The Museum That Wasn’t

I’ve referred in earlier blogs to the Ten Great Buildings erected in celebration of the ten-year anniversary of the founding of the People's Republic of China.

One of these buildings, constructed between 1958 and 1960 is The Military Museum of the Chinese People's Revolution (中国人民革命军事博物馆) situated on the Fuxing Road in Haidian District.

I was put to shame recently when my daughter and son-in-law came out on a visit. They have seen this museum, but I had been nowhere near it... until today that is.

Reading that fount of all knowledge – Lonely Planet – I discover that the museum is renowned for its display of restored military equipment from the history of the People's Liberation Army, up to and including modern-day machinery.

Ten halls are spread across four floors and in them you can see all manner of antiquated weaponry, small arms, artillery, tanks, armoured personnel carriers, anti-air weaponry, jet fighters, rockets and rocket launchers, cruise missiles – the list just goes on and on.

So I force myself out of bed at some uncivilised hour, and after a hurried breakfast set out for the other side of town – the museum sits to the west of Tian’anmen. Just a stone’s throw from the subway station is a hideous building which can only be the museum! 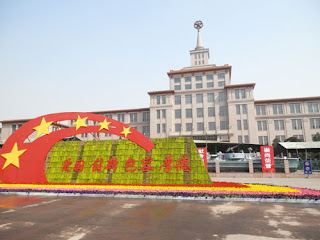 If confirmation is needed, I see it is in the shadow of the old CCTV building slap bang next door to it (well, it would be in the shadow by late afternoon, I reckon). The boring old CCTV isn’t a patch on its contemporary replacement which of course very much represents the pinnacle of architectural achievement (or not, depending on your point of view) in Beijing. 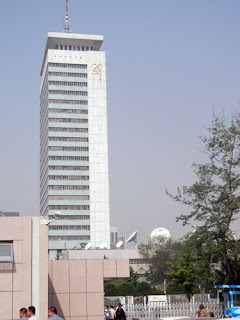 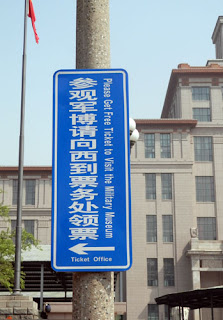 Wikipedia backs me up. The museum is “open for free admission, though visitors must show identification and consent to any security bag checks,” it advises. But I am not asked to show any ID, and even with keys and a phone in my pockets, the x-ray arch through which I walk remains obstinately silent. A bored security guard sighs, as if to say “what do you expect”? and waves me on.

Inside the front courtyard are a number of display areas, but I head right past these towards the main entrance to the Leviathan museum with its obligatory sculptures by the steps. 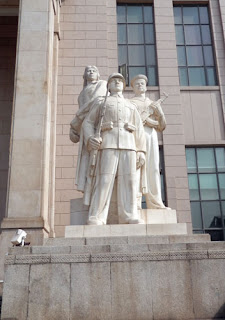 The two four-storey wings and main building of seven stories occupy a total area of 60,000 square metres. On the top of the building is the gilded emblem of the Chinese People’s Liberation Army. And on entering the lobby there is a statue of the Great Helmsman dominating all he surveys. I note that he is covered in a thick coating of dust… Around the walls are large murals depicting some of China’s leaders inspecting the troops. Naturally Mao yet again takes pride of place… 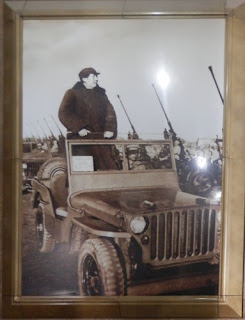 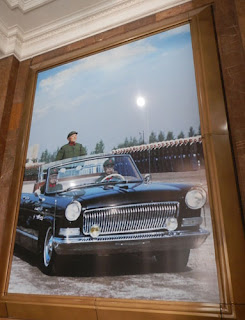 I make my way out of the lobby area, but all I see are signs to the toilets. I climb the stairs. Ahead are the toilets (labelled Men’s Lav and Woman’s Lav!) and round the corner is a sign… 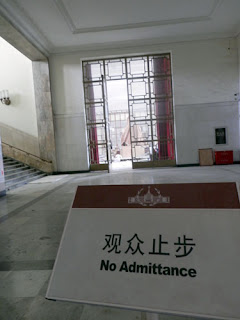 It looks like every gallery in this monstrous building is closed for refurbishment. This obviously accounts for the dust everywhere. 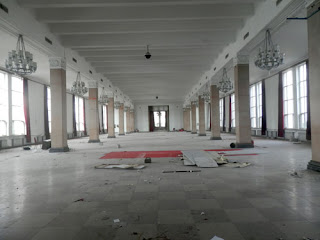 Around the central gallery, though, there is still a collection of souvenir bric-a-brac stalls selling everything from Mao keyrings and toy guns to models of military satellites which you can use to grace your mantelpiece as a memento of your fabulous day out. 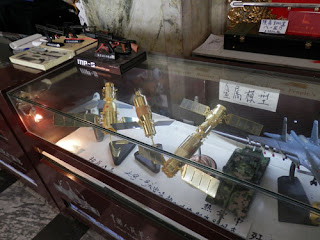 Not needing to inspect the plumbing, and eschewing the temptation of decorating my apartment with models of satellites, I make my way out of the building with tears in my eyes to go take a second look at the display areas. First in line for my inspection is a load of tanks – a mix of Chinese and Russian – sitting beneath a temporary canopy. 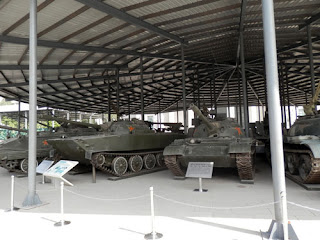 Fascinating though they undoubtedly are, I find more interest in a small group of visitors from the provinces who want their photos taken with the tanks, wearing their local national dress – the girls that is, not the tanks. 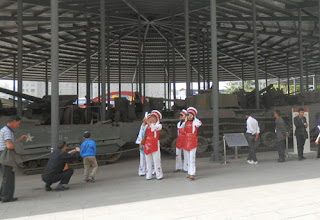 Moving on from the tanks – that all look as if they could do with a good hosing down – I move on to weaponry, including a collection of old cannon that looks in desperate need of a dollop of TLC. 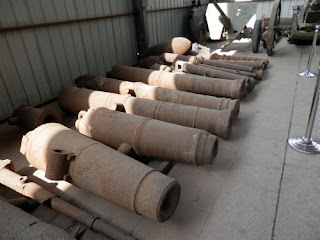 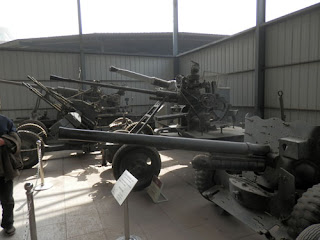 There’s even the re-entry capsule of China’s Scout reconnaissance satellite, but unless you can read Chinese, that’s about all you are going to find out about it. 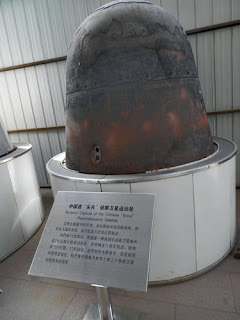 More sheds appear one after another. In one, an American P-51D Mustang fighter, vintage 1949, is parked. 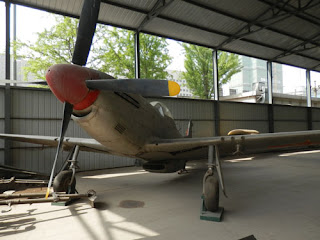 In another, the wreckage of a high-altitude US scout aircraft with details of how it was shot down. I stop myself from sneezing, just in case the whole damn thing should crumble to ash. 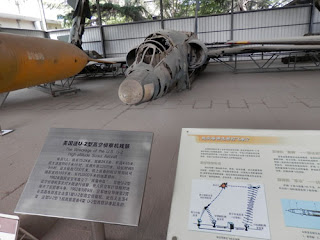 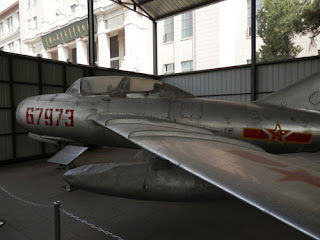 while of course there are also plenty of Chinese fighters on display. Here’s a J-5 fighter from the 1950s… 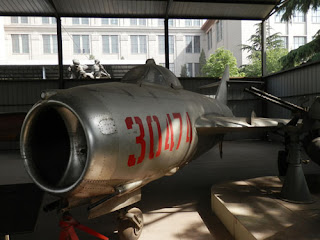 If the sight of dust-covered aircraft starts to lose its appeal, how about some surface-to-air missiles? The museum contains a whole load, including this 1967 HQ-2… 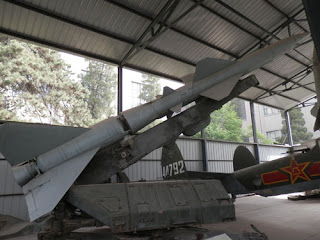 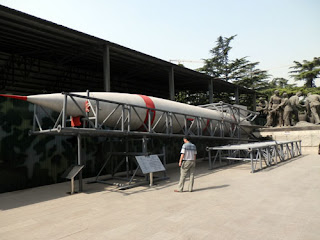 and not so far away a Dongfeng-2 missile from 1964 makes for a handsome decoration to a rest area for those in need of somewhere to sit. 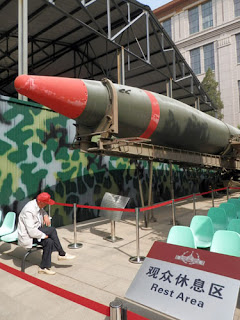 If missiles don't really float your boat, however, you can make your way to another rest area dominated by a patrol vessel of the PLA’s Navy… 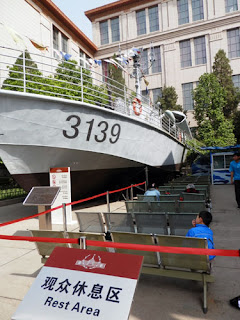 There are also a couple of patrol vessels mounted in the “dry dock” of the front car park area, but no one seems particularly interested in them. They too could do with a good hose down, I reckon.

I turn one more corner and am flabbergasted to discover a group of young soldiers scrubbing the innards and outside of a tank. My mind races back x0 years ago to when I was a young lad in my school’s army cadets. I was given a punishment of cleaning 100 rifles for “gross insubordination in the ranks”, though I can’t for the life of me remember what I could possibly have done to have deserved such treatment. 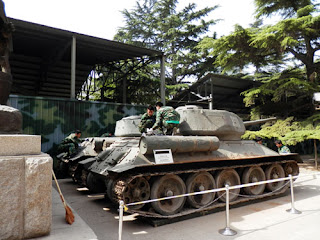 My heart goes out to these youngsters. Whom could they possibly have upset and what on earth did they do? How many tanks will they have to clean? Have they never heard of a bucket of water and a cloth? Or even a hose? I fear I will never find out…
Posted by Brian at 9:09 AM