Which is more stunning... Nature or Chinglish?

Beijing is a city that is blessed with beautiful parks. The Chinese as a whole take their enjoyment of nature to extremes and one of the outcomes of all this is a willingness to invest in what many a western nation puts way down its list of fiscal priorities.
One of the parks, that is less known by western residents in Beijing than many others, is called Taoranting (or Joyful Park - 陶然亭公园). It lies to the north of Beijing's Southern Railway Station in Xuanwu District and due west of the Temple of Heaven. Taoranting, constructed in 1952, was the earliest modern city park built after the establishment of the People's Republic. Some 60,000 visitors come here every day during peak times. What I love about this park in particular is the amount of water there is – of its 146 acres, 30 per cent is made up of lakes. There are also many historical relics preserved since the Warring States Period.
The park gets its name from the Taoran Pavilion (陶然亭) which was built in 1695. It is officially one of China's four famous historical pavilions (together with Aiwan Pavilion in Changsha, Zuiweng Pavilion in Chuzhou, and Huxin Pavilion in Hangzhou). Scholars often frequented this pavilion, gathering there reciting and composing poetry and essays, or just to relax, admiring the beauty of the moon – or so the official blurb would have us believe. 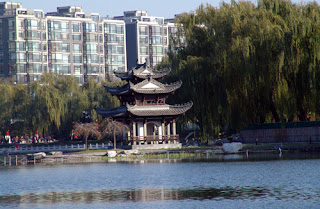 In the 20th century several famous revolutionaries were closely associated with the Taoran Pavilion. At the end of the Qing Dynasty Kang Youwei, Liang Qichao and Tan Sitong came here to plan the Reform Movement of 1898. In the early years of the Republic, Sun Yat-sen attended political meetings in the pavilion; and on the afternoon of August 6, 1920, five progressive societies from Beijing and Tianjin held a joint meeting in the pavilion which was attended by Zhou Enlai and Li Dazhao. The tombs of the revolutionaries Gao Junyu and Shi Pingmei are on the northern side of the Central Island.
Apparently, though, in imperial times the scenery was not particularly attractive. To the north of the pavilion was a residential district of single-story dwellings and to the east a group of desolate tombs. To the south stood the bare city walls and to the west a stretch of shallow water filled with reeds. In fact, up until the founding of the People's Republic in 1949, it was little more than a breeding ground for flies and mosquitoes. After dark, the area became a haven for criminals and the island’s pines were frequently used for suicides by hanging.
Anyway, the new People’s Government transformed the stagnant pond into a lake. The earth dredged out was heaped up to form seven small hills on the lake’s perimeter and these were then planted with flowers, trees and shrubs.

One of the things I love about Chinese parks is the way people naturally congregate to sing, or play and dance. Anyone can join in, though I think on this occasion I would have felt a bit self conscious without my ethnic minority glad-rags … 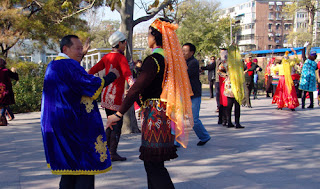 The park attendants are numerous and I see I have arrived at change-over time. I always wonder why anyone thinks they need this many on duty, but I suppose it's a way of dealing with the unemployment problem.

The original swamp has been transformed into three lakes, joined to one another under cute little bridges, such as this one… 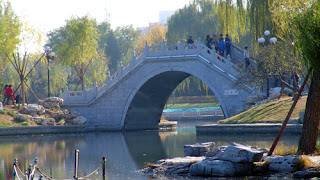 … though this bridge looks wonderful with its reflection in the still water. Loads of people are taking photos of it, so I guess I’m not the only one who appreciates the vista. 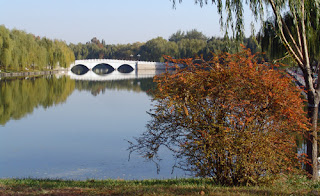 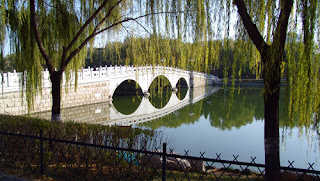 In common with other Chinese parks, this one also has a “park within a park” – Huxia Mingyuan … in this case The China Garden of Famous Pavilions, or 'The Garden of Gardens' and which opened to the public in 1985. The mini-park contains 36 pavilions in all, ten of which are full sized replicas of other famous pavilions in ten cities covering six provinces. 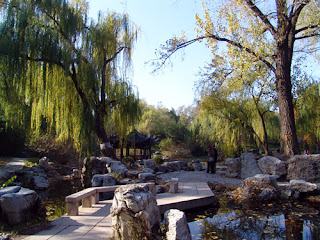 I particularly like this triangular pavilion, not that I can tell you anything about it. It’s the only three-cornered one there and though it’s small, I find it somewhat cute – if a pavilion could ever be thought of as cute that is! 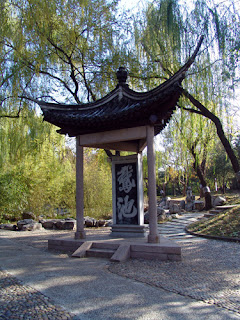 Some of the finishing touches, too, are “cute” – such as this dragon’s head water spout. 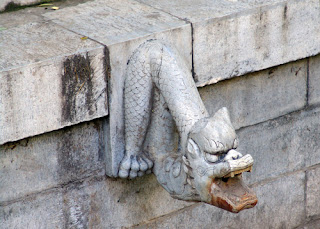 Some of the grotto effects are a little less cute though, and more on the contrived side, perhaps, but they’re not unpleasant in the slightest.

The island in the centre of the three lakes is reached by three bridges. This is the one we saw earlier reflected in the water from afar…

And where there is a bridge, you will invariably find someone trying to sell you something – though in this case it was such a still day that this kite seller was having a tough time.

With such splendid backdrops, it is hardly surprising that everyone wants to be a star here singing to the masses. This lady was obviously a “celebrity”, as the pathway up to where she was had been blocked off so no one could wander up unobtrusively… 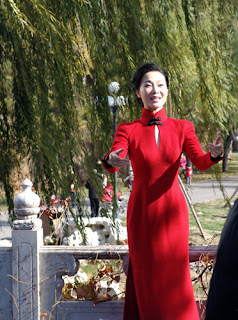 I went the long way around and found she was performing for a TV show, miming to a recording ‘sotto voce’. 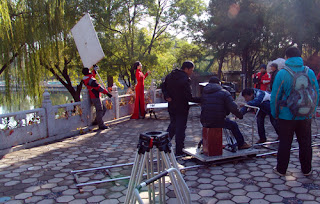 Other starlets were also having their pictures taken. And with such glorious backdrops who can really blame them? 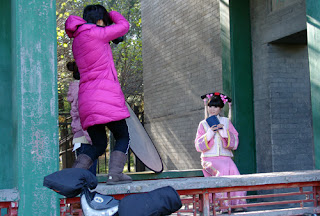 Emerging back onto the bank on the eastern side, I came across more dancing – this time a Chinese version of American line dancing. 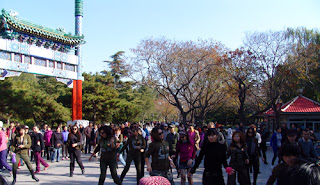 But maybe the most spectacular part of the park for me was the foliage of the trees that were finally starting to turn red a full two weeks after we had had our first two snowfalls of the winter. 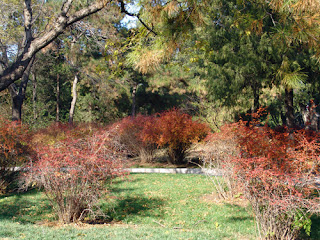 However, perhaps the most photographed (or certainly what should be the most photographed) spot in the entire park can be found in the Gents loos by the eastern gate. It’s a classic of Chinglish and has almost certainly come straight out of Google Translate’s stable of signs-to-die-for.
Why the Chinese feel they always need to place signs everywhere there is any space on a wall beats me; but I’m not complaining. Don’t you just love it!

FYI the Chinese reads “lean forward to pee, so as to avoid a spill” (thanks to Meiling for helping me out with that one!).
Posted by Brian at 7:13 PM