One of the things I love about living in China is the fact that there is never a shortage of signs and slogans to lift you up and give you pause for thought. Maybe it fits into Western expectations, nurtured over the years with tales of “Confucius… he say…” or even the little red book of Chairman Mao. Anyway, it is something the Chinese certainly do very well. 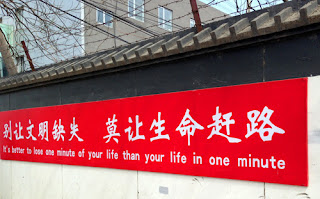 I was thinking of this the other day when I took a short trip out to the ‘tourism cultural village of Gaobeidian’ (高碑店地区), lauded in numerous web sites as “a destination for tours, sightseeing, food, lodging, shopping, as well as performance and entertainment.”
A handful of tour companies even organise visits out to Gaobeidian for around US$150 per head – but as the subway fare comes to 2 yuan (about 30 US cents) I find myself wondering what on earth can be so tempting to get people to part with an additional $149.
With one article trumpeting “Ancient Gaobeidian Now a Tourist Lure” to its readers, I am left asking myself who could resist? OK, the fact that not one single person I ask has even heard of the place let alone been there, should have given me pause for thought. Mind you, I guess even if I had paused, my insatiable curiosity would always have nagged me until I finally got off my situpon and made the journey out there.
And so, one fine spring day, I set off to the south east corner of Beijing, riding for the very first time on the Batong subway line – an extension of Line 1 – to Gaobeidian station, the next one along from Beijing’s Communication University. 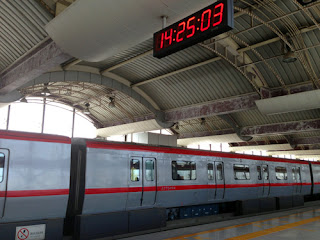 The village is only a short walk from the station, though there are no signs to it at all. (Note to those daft enough to want to go there themselves… take the south east exit from the station, walk past the car dealerships and turn left at the next main intersection.) Could it be that not everyone is as proud of this place as the tourist books would have one believe?

At first glance it all looks rather lovely. On the right hand side of the road, there’s a huge lake formed from the Tonghui Canal which cuts through the north of the village. It is said that when Kublai Khan founded the Yuan Dynasty (1279-1368), he chose Yanjing as his capital, but had to find a solution to the problem of how to transport food collected in Tongzhou to Dadu (now central Beijing). He opted for water transport, and put a hydraulics expert, Guo Shoujing, in charge of the project. Guo diverted water into Jishuitan to create a water-accumulating pool, then funnelled it south-eastward to the Bai River in Tongzhou along the east side of the Imperial City. Kublai Khan named the man-made canal Tonghui River and Gaobeidian, as a result, became a prosperous dock serving the Chinese capital.

What the tourist sites don’t tell you, however, is that Gaobeidian also has a massive sewage treatment plant that can recover three tons of phosphorus from the one million cubic metres of wastewater it treats every day. In addition it collects 20 tons of magnesium ammonium phosphate, recovered every day. The plant processes about 40% of Beijing Municipality’s total wastewater volume and features primary and secondary treatments, methane gas utilization and sludge processing facilities. Can’t understand why they leave that out of their gushing descriptions…
By the side of the water (which has collected its fair share of rubbish floating in the shallows, through which numerous people are fishing) there are various objects put up, presumably, to beautify the surrounding area, such as this petrified tree trunk… 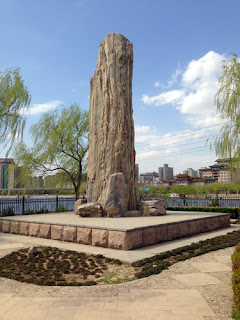 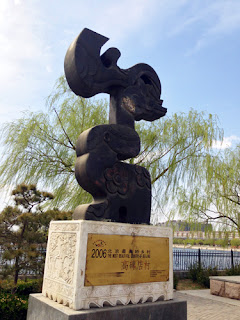 On the south shore of the lake is a tall classical style Chinese building which houses the tourist information centre – but for me the building is totally spoiled by its western wall which has a giant TV screen built in to it. There is nothing being shown on the screen today – not even Shaun the Sheep (which plays to rapturous audiences on the TV screens of Subway Line 1) for the kids playing in its vicinity. 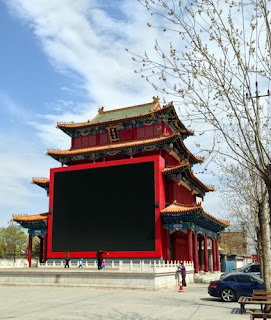 There’s a large statue, whom I presume to be Guo Shoujing dominating the car parking area… 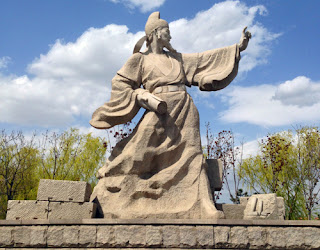 … and continuing westwards along the shore is a path lined with statues in the same vein. 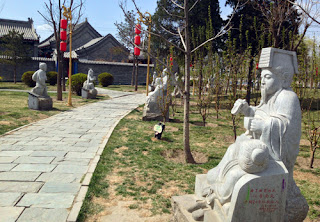 It is at times like these that I wish I could read Chinese, since the planners of this “tourist paradise” have not thought to give translations of the inscriptions. Why, for instance, is this woman sticking her tit into the face of someone who appears to be twice her age? The mind boggles … overtime! 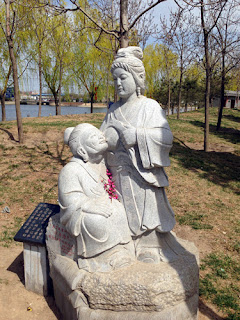 And as for this woman riding her tiger, I am sure I could come up with loads of storylines for such a scenario, though I somehow doubt I would hit on the real story behind the art work! 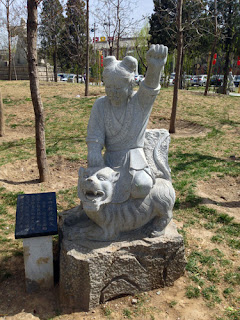 Across the road from the lakeside is Gaobeidian village proper. And it’s here that – yet again – I have to ask myself if any of the websites that have written up this tourist paradise have ever visited it for themselves, rather than relying on a marketing handout. For instance: “The main road of this dusty hamlet is lined with warehouses and showrooms that overflow with reproductions of Ming and Qing tables, opium beds, chairs, benches, stools, drums – you name it. What’s more, the merchants can custom-build whatever you cannot find in stock. Gaobeidian, long considered the antique furniture village of Beijing, is now becoming a more developed retail area … Consider it your valuable alternative to Panjiayuan and Ikea.”
Some of these descriptions were posted up on the web as long as six years ago; but the reality is that this place is still one large construction site, with grey two-storey pseudo-Hutong-style buildings going up everywhere. OK, regular readers of this blog will know that I am forever amazed at how inaccurate the majority of web descriptions of China’s tourists spots actually are, but if China had a trade descriptions act, this place would surely be bottom of the list.
I think I am probably the only foreigner in the entire area today; and I can make this claim, despite Gaobeidian having an area of 2.7 sq.km., as the entire place is practically deserted – and this on a weekend when you would expect it to be at its busiest!
Beijing’s Chaoyang District has invested more than one million yuan in rebuilding Gaobeidian’s Classical Furniture Street, but as you walk through the area you find, like everywhere else around here, that you have to pick your way through the scaffolding and building detritus littering every side street. 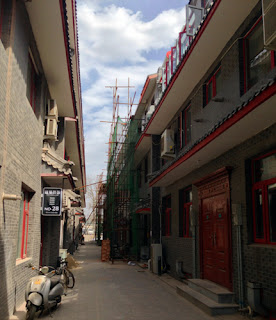 And if you do actually venture inside any of the shops (which in fairness have some stunning furniture and other artefacts on display) you aren’t left alone for a second. This, too, is another Chinese characteristic which you even find in supermarkets, where it is impossible to browse and ponder without having a pushy sales person yattering away at you trying to get you to part with your hard earned readies for something you quite clearly do not want.
This place has got this annoying habit down to an art form. It is impossible to wander about the stores on your own, as you are hassled the moment you step through the shops’ portals with a hard sell approach, making it a very unpleasant experience. Really, someone should educate these shopkeepers to the fact that they are actually scaring away all their potential customers. But then, you would think that basic psychology would have told them that already – or is this laowai really any different from the vast majority who may or may not ever visit this place? 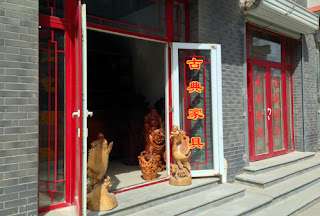 After attempting three shops, and being treated in exactly the same way in each, I decide that enough is enough and start to put some distance between myself and Gaobeidian tourist village. But rather than just waste the hour long journey, I decide to explore a park adjacent to the station that I noticed on my way here. To see the magnolia bushes in bloom, you would be hard pressed to realise that we had snow here just three weeks ago. But spring arrives very fast in Beijing and suddenly everywhere is turning into a riot of colour. 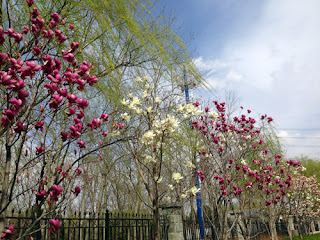 The entrance to the park looks promising… 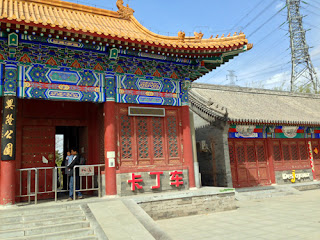 … and, even better, one is told on the inside (but only once one is through the gate!) that there is no charge for entry. 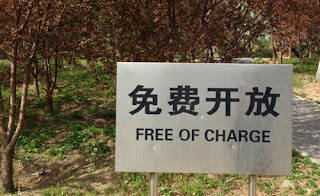 There is a helpful sign for emergency toilets – which makes me wonder what constitutes an emergency in such a situation. The answer soon becomes very clear … it would have to be an emergency to force you to use these facilities with, I suspect, the majority of people preferring to walk with their legs crossed rather than have to avail themselves of these conveniences!

A multi-directional sign points me in the direction of the “Ceneral Woods” which is in the opposite direction to the emergency loos. I mosey forth… 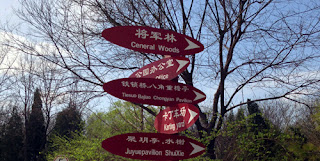 But just like the tourist village, these “ceneral woods” appear also to be under construction! There certainly isn’t much of a wood to write home about – ceneral or otherwise! 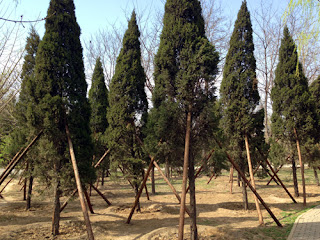 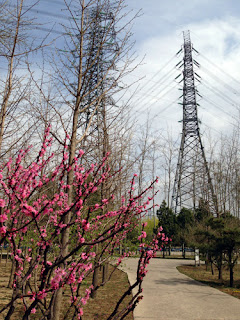 I head back to the station and am rushed back into central Beijing where I meet up with a friend. Yet another sign catches my attention – this time for a coffee stall. The sign is certainly eye catching for a westerner, but I wonder how it has been translated into Chinese?
“The smallest coffee shop in Beijing”, it reads. No mention of the coffee’s sexual prowess whatsoever. How I love the Chinese! 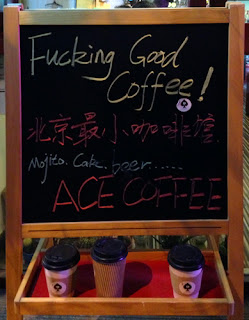