On a clear day you can see for miles

For some two years now I have been working my way around Beijing’s plethora of museums, temples and parks and still, it would appear, I am nowhere near the end of my explorations. Long ago I made up a list of places to discover; but recently I was asked if I had ever been to a park called Bai Wang Shan and had to admit I hadn’t even heard of it, let alone have it down on my list.
I check out my guide books on Beijing: Fodor’s, Lonely Planet, Frommer’s, DK, Insider’s Guide, Panda – none of them give so much as a mention of this place.
Have I written it down correctly? I look on the web. More luck this time with a few copy-and-paste web sites at least mentioning the park in passing.

getlocalchina.com has two words written about it: “Get map” – which shows the park situated close to the 'Beijing Opening University' (sic).

here.com is one of many abysmal sites that list the place and then simply add “Be the first to review Bai Wang Shan Forest Park”.

homeandabroad.com is another rubbish site: “Currently, we don't have any things to do in our database for this destination. We are constantly expanding our site and adding to our inventory though, so don't give up. In the meantime, if you know of a great activity, please let us know by sending us an email.” In other words, “this is a plagiarism site and we have nothing original to tell you.”

visitbeijing.com.cn gives even more information, but somewhat spoils the effect by including three pictures of The Forbidden City at the end!
A couple of sites I find actually list the buses that go there (though at least one of the buses listed goes nowhere near the place, so that isn’t really a lot of help either.) When I eventually locate it on the map, it is quite clear that one could easily take Subway Line 4 to the very end of the line and then either grab a bus from there, or even walk it in about 30 minutes.
The main entrance is actually slap bang next to the Central Institute of Ethnic Administration. Bai Wang Shan Forest Park (百望山森林公园) can be literally translated as ‘100 things to see mountain’. It’s the nearest forest parkland to central Beijing and covers an area of 167 hectares, of which over 95 percent is covered in lush forest and vegetation. 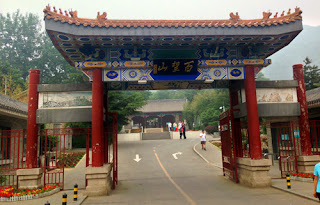 It’s a murky overcast day, but still there are a number of other visitors here, determined to enjoy ‘the lungs of Beijing’. Paths go off in three directions, with a pavilion marking the starting point and views of the greyed out mountain chain behind. `

Near the entrance are some activities for kids who are engrossed in cutting and painting and ‘learning about nature’. They are outnumbered by doting parents and supervisors and appear oblivious to anything else going on around them. 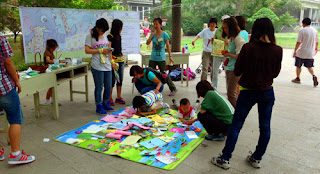 Throughout the park are over 1,000 stone tablets – known as steles – all themed with protecting nature, promoting a green environment and commemorating the achievement of re-foresting. This forest of steles features inscriptions, poems, verses, paintings and calligraphy by leaders and celebrities as part of a ‘greenification campaign’. As travelchinaguide.com says, “it is an ideal place to conduct education in patriotism, environmental protection, countryside travel and physical education” – or it would be if you could read Chinese, I suspect! 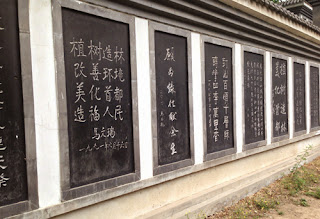 The steles can be found everywhere. It seems every available surface has been covered in these admonishments and where there are no natural surfaces, new walls have been built, specifically to add new ones. 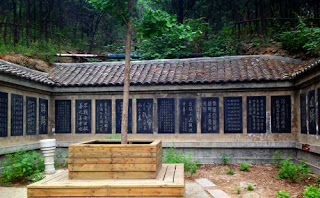 In some places, there are so many stele inscriptions that a criss-cross of alleyways has been constructed, marked out by the stele walls. 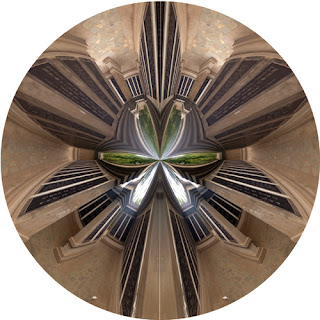 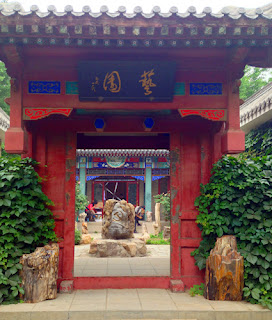 It’s a museum – or should that be a shop? – of petrified wood that has been polished and mounted to make beautiful objects of desire to place in one’s home. I mean, who could possibly pass up the opportunity of getting a hammer-and-sickle motif to decorate their garden? 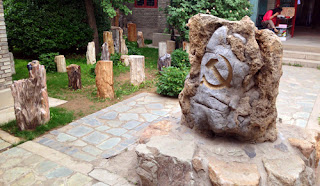 Seriously, though; some of them are really beautiful … 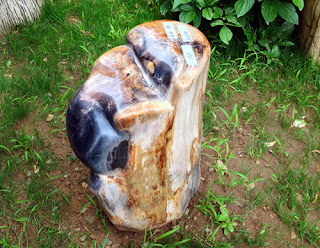 and one can truly appreciate the coming together of nature with man’s ingenuity to ‘improve on nature’ by carefully polishing the petrified wood. 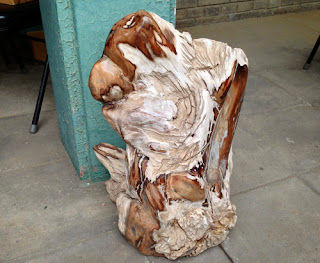 Outside this museum area is a collection of bonsai trees – or Penjing (盆景) … literally ‘tray scenery’ as they are known in China. 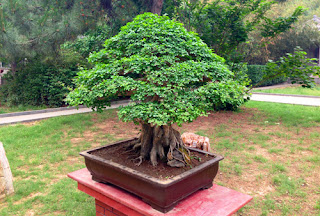 And this being a family-centric park, there are designated areas where the old folk can look after the kids, while the kids’ parents can hike up the side of the mountain.

Round each and every corner there is always something new to see: little stone bridges; ponds and lakes; mini pavilions; landscaped trees… 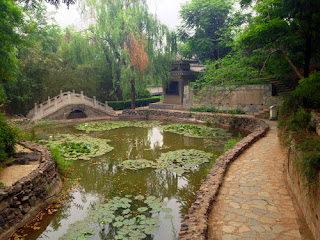 and if you enjoy people-watching, then you can’t find a better place. Here’s one family who have taken the concept of his-n-hers t-shirts to the next level. 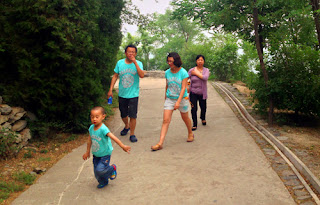 The paths slowly wend their ways up the mountain side, heading for two pavilions situated on the adjacent peaks. Once you reach Youyi Ting (友谊亭) you have an excellent view of Lanfeng Ting (揽枫亭) – or rather you would have if the day wasn’t so grismal as it is today. 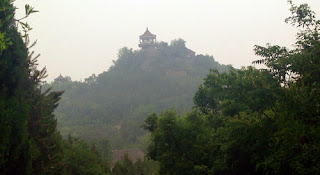 As there are so many twisting paths, none of which appear to go in the direction in which you are initially headed, the occasional map provides a welcome relief … though if you don’t read Chinese, then another method is simply to follow everyone else and hope they are heading for the same place you are! 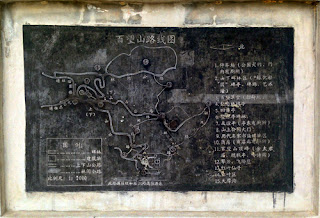 Near the second summit is a pigeon coop full of birds fluttering in and out of the back door. But as it is situated right next to the entrance to a cafeteria, I have to ask myself if some of these unfortunate birds are not destined for the cooking pot. 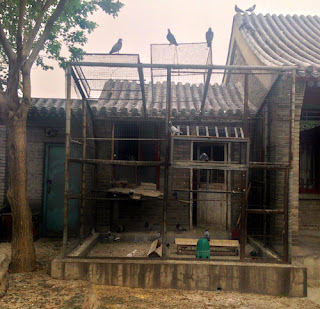 Nearly at the very top now.
After an hour of walking there is an obelisk spelling out Bai Wang Shan – 百望山 – so if you had been in any doubt, you now know you were on the right track all along! 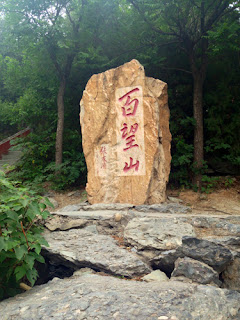 Any guesses about what there is to see up here? Yes! Yet more steles – though some, like this one appear to be more light hearted in nature than some of the more serious ones below. 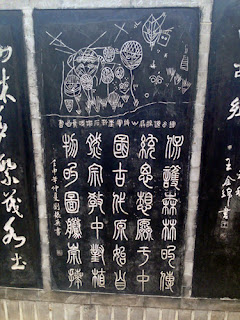 At the very top is yet another pavilion. This one has the inscription ‘Yin Shi Ge’ written above it – literally ‘The place to recite poems’. You can so easily imagine the Chinese of yesteryear hiking all the way up to the top of the mountain solely to read out their odes to nature and to be at one with the trees and the shrubs and the sky. 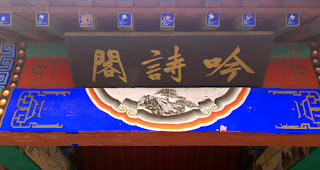 But this isn’t the only reason that this spot is so popular. In 1993, in commemoration of the 100th anniversary of Chairman Mao, they erected a marble tablet in the pavilion which records Mao’s thoughts in his own writing.

Close by, there is another place of historical interest. The She Tai Jun Temple (佘太君庙) was built in memory of an outstanding heroine in the Bei Song Dynasty (960-1127).
The story goes that there was a family – the Yangs, who were famous for their loyalty to the Emperor. She Tai Jun, who was the great-grandmother of the family, lost her husband and 5 out of 8 sons who died on the battlefield. She, who was now 100 years old, was holding a 50th birthday celebration for her grandson, Yang Zong Bao, who at the time was away guarding the frontier, when news was received that he had been killed by the military of XiXia which was attacking the country. The royal court decided to open negotiations with XiXia; but She Tai Jun instead led the widows, the wives of her sons and and her great-grandson, Yang Wen Guang, into battle against the enemy. Eventually the King of Xixia was defeated and withdrew – which, I suppose, all goes to show that you shouldn’t write off the old folk! 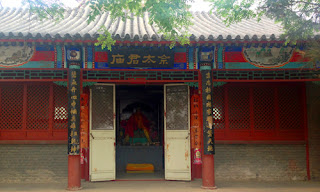 and I particularly like this little pet lion (or is it a dog on a bad hair day?) sitting by her feet. 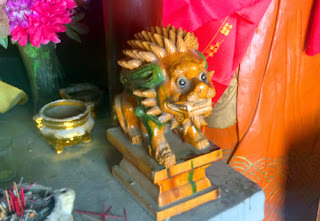 From the top the weather is closing in, though I can just about make out the route taken to reach the summit.

Deciding to take a different route back to the entrance via ‘the Valley of Silence’, the path meanders through scenic gorges and nature at its very best. 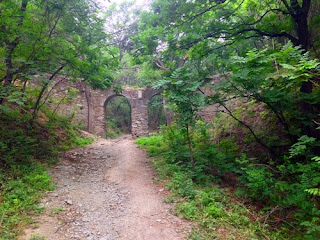 Lest anyone gets a bit careless, there are signs reminding of the dangers of fire. “Fire is the deadly enemy of the forest, prevention is always better rescue” reads one. While another doesn’t quite mean what it says, I suspect: “Forest is a treasure box. No caution with fire, it can be Pandora’s box.”

Eventually all roads lead back to the entrance. And what does everyone want to do before leaving? Yes, of course – go to the loo! And in this most beautiful of parks, what could be nicer than visiting the 净园  – or ‘Clean Garden’ – which lives up to its name and is as pleasant inside as well as out. 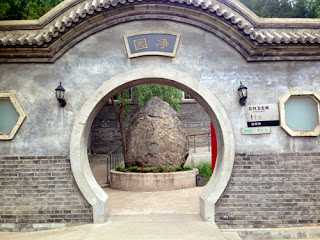 beijing.uncoverchina.com may well be right about Bai Wang Shan being beautiful in the autumn. But I can now add a little more to their collected wisdom. Bai Wang Shan is beautiful at other times of the year too – even on a misty day when half the view is greyed out by the clouds.
Why on earth don’t the tourist books even list this place, I ask myself. It definitely makes it to my places-that-should-be-visited list of tourist sites in and around Beijing.
Posted by Brian at 8:08 PM