I think it was the snort of derision that sighed gently down the phone that made me wonder what I was letting myself in for. It was to be my first 4-wheeler trip on the dunes and I had naively asked whether my pride and joy, the new love of my life - my Hyundai Santa Fe would be up to the job.
A Santa Fe, I was told, brings out the feminine side in you. For dune driving you need a man’s car. And so it was that I sweet-talked Ken into bringing his (highly masculine) Galloper out onto the Bukhra dunes a week before the start of Ramadan.
We were told to arrive at the check point at 8.50 and to park on the left hand side of the car park. Ken and I pulled in at 8.45 to find that a swarm of the local police had ideas of their own and had met up to socialise, pass the time of day and do whatever it is that cops on a weekend shift tend to get up to in Riyadh. So we pulled in to the right hand side and were soon joined by a legion of other 4-wheelers.
Reg gave out a brightly coloured satellite ‘map’ together with 12 way points and as my wife had kindly forked out for a GPS for my last birthday present I thought this would be the ideal opportunity to put it to good use. So I spent the next half hour carefully plotting in the coordinates and telling Ken that it was only 3 kms to the turn off. (Fifteen kms later I discovered that when you’re suffering from early signs of senile dementia it’s easy to get confused between a ‘3’ and a ‘2’ when punching in the way points.)
I need not have bothered. Within minutes of having arrived on the very edge of the Red Sands it was announced that the ground was far too soft to even contemplate attempting the planned route and we could forget about those way points. (Have you ever experienced that feeling that perhaps a part of life has passed you by?)
As there were ten cars it was decided to split us up into two groups – Andy would lead one whilst the others would follow Reg. And so as the air was let out of 40 tyres, a beauty parade was held by the side of the road. ‘You can join my group’ said Andy; ‘I’ll have you’ said Reg…until all takers were suitably teamed up.
And then we all poured onto the sands, over the barbed wire lying forlornly on the ground and drove all of 100 yards before coming to a grinding halt. I was beginning to understand why they are known as the Bukhra Dunes*, since you’ll be lucky to reach anywhere on the day you actually set off. But eventually we did set off – Ken and I nosing our way along after Andy’s macho Nissan which careered up the sides of dunes and down into the depths with a flash of its nether regions that would put any exhibitionist to shame.
I was glad that Ken and I weren’t the first to get ourselves well and truly grounded (we were the third in our little group) and someone made dismissive comments about the unreliability of Discos when Reg’s Discovery seemed to be burying itself into the sand at every available opportunity. 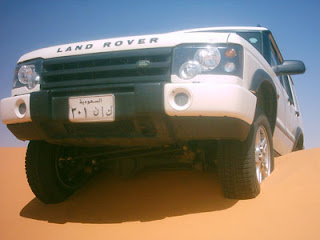 (Later it turned out that a tyre pressure gauge was giving false readings and the Disco’s tyres were far too firm.) A tow rope, I discovered, was the order of the day. That, and a hefty four-litre engine to give some welly at the other end was what got most people out of a sticky hole. 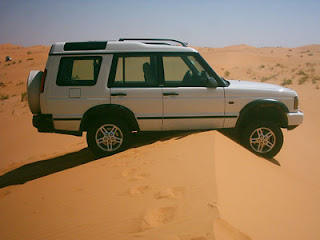 The rest of the morning was memorable inasmuch as going ‘over the top’ on Blackpool Pleasure Beach could probably be described as memorable. I was convinced we were driving almost vertically down the sides of some dunes to land with a thump and a sharp jolt at the bottom. Ken’s inclinometer was showing a ‘mere’ 40 degrees but I’m still convinced the blessed thing was suffering from inertia.
The afternoon’s drive was a lot easier once it had been decided to follow a route that hugged the side of the sands and (apart from one of those touch-and-go moments when you wonder what lunatic would ever take his car over such a course) we chuntered merrily away over some spectacular scenery which took in a couple of well heads – sealed shut to stop anyone from even thinking about helping themselves to the precious liquid – and drove rapidly (too rapidly, moaned some would be photographers) around some bleached camel bones that stood out in stark contrast against the ruddy background.
Finally we drove over the crest of a hill and wound our way down past a remote farm where the goat and camel herder must have wondered what had caused the rush hour. (‘Did you have a nice day at work?’ his wife would ask him later, picking the fleas from off his ghutra, and he would reply that it had been one of the most memorable in a long time.)
And so we made our way back to the Makkah-Riyadh highway, singing the naughty version of ‘Mad Dogs and Englishmen’, and stopping briefly for a group photograph. 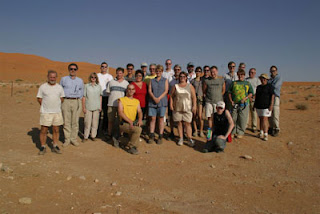 I learned that the last person to bring his Santa Fe to the Red Sands had burned out its clutch in the attempt. And so in retrospect I think I was probably doing my little red beauty a favour by abandoning her for the day in favour of her more macho cousin. But a 4WD for the ‘limp-wristed’? I don’t think so duckie!
[* Bukhra is Arabic for tomorrow]