The Day You Hoped Would Never Happen

The explosion, when it occurred, did so without warning. It’s a miracle that no-one was injured.
One moment I was working at my computer, happily tapping away on the keys, and the next it felt as if the building was shaken to its foundations, there was the sound of tinkling glass and then … stillness. As if time stood still. The birds stopped twittering outside. The radio stopped in the middle of a happy-clappy bedou number. Nothing. Hardly a breath of wind passing through the house.
Of course we were always told to be on our guard in Saudi Arabia, but like most people, I suspect, we never thought it would happen to us.
I expected to hear a siren working its way up the street to the villa, but… nothing.
I opened the door of my office not knowing what to expect. And the sight that met my eyes as I walked round to the kitchen area was one of carnage. Shards of glass lying all over the place: on the floor, on top of the fridge, even embedded into the side of a cucumber that had been abandoned to its bloody fate the night before.
And all around me a sickly sweet smell with splatters of red on the floor, over the walls, on the ceiling and the relentless drip, drip, drip of crimson staining its way over everything.
What made it worse was the fact that I had been waiting for the delivery of three air conditioning units which, as usual, were promised for delivery the next day, but that next day never came.
Perhaps if it had been cooler, the stench and the resulting flies would have been more bearable. But as it was, I had to switch on our ultra-violet-electronic-fly-zapper that sent the little critters off to paradise, and the little tray started filling up with twitching bodies almost immediately.
I can’t remember how long it took to pick up the shards of glass. Probably about half the time it took to get a bucket of soapy water (or three) and to wash down the walls, ceiling, floor, cupboards – and then to start on the larder contents and to clean up the mess that had been destined for supper. 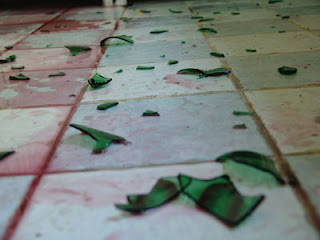 By now, the full horror of the situation was slowly dawning on me. It was going to be bad enough explaining why there was now a dustbin full of soggy red cornflakes. But what on earth were we going to do for the next desert camp out? I mean, Château Riyadh usually took weeks to ferment to perfection. And now we were going to have to go down to the supermarket, buy up a whole load more grape juice, sugar and yeast, and start all over again, and just try to make something drinkable in under a fortnight.
It was enough to make you cry into your sid* and tonic.
[*Sid - short for Siddiqi (Arabic for happiness) is the name given to home distilled spirit made by expats for expats. Dangerous stuff, a bit like poteen]