I’ve never really liked the Times Square Mall. I’ve always felt there is some kind of jinx on this place, ever since I got a parking ticket for leaving my car outside, after they had newly installed parking ticket machines, but had somehow forgotten to put up any signs telling the hapless motorists, of whom I was one, that things had changed since last time they were there.
So I should be the last one to be surprised by my latest experience in this apology for a shopping mall, which is perched on the edge of Sheikh Zayed Road. You half expect to see a large sign borrowed from Dante’s Divine Comedy positioned at the mall entrance:
Abandon hope all ye who enter here!
So I should have known better. But poor Sushmita was desperate for a break from work, and being the kind, generous and understanding sort that I am, I offered to collect her from the KT office and drive to the nearest coffee parlour which, of course, just happened to be in Times Square. Silly me!
We parked in the underground car park, even though it being Eid, the Road Transport Authority had announced that parking tickets had been suspended for the holiday. You just never know when someone might just change their mind…
And so it was up the escalator and into the Caribou Café for coffee and edibles.

Sushmita decided she was starving, so we plumped for a cappuccino, to be accompanied by a chicken fajita, to assuage her hunger, followed by a wedge of lemon cake to round it off, and for me a raspberry and almond muffin.
Had we taken leave of our senses? This was Times Square (I might already have mentioned this)! And it was the Eid holiday. But we blithely found a comfy sofa and mock-leather arm chair and sat back waiting for our mini-feast.
It was at this point in time that the corny old “joke” about coffee tasting like mud comes to mind as it has “just been ground” (he-he-he). Or better still that famous Blackadder sketch in which Baldrick offers to make coffee for Captain Edmund Blackadder…
Edmund: Baldrick, fix us some coffee, will you? And try to make it taste slightly less like mud this time.
Baldrick: Not easy, I'm afraid, Captain.
Edmund: Why is this?
Baldrick: 'cause it is mud. We ran out of coffee thirteen months ago.
Edmund: So every time I've drunk your coffee since, I have in fact been drinking hot mud...
Baldrick: With sugar.
Edmund: Which of course makes all the difference.
Baldrick: Well, it would do if we had any sugar, but, unfortunately, we ran out New Year's Eve 1915, since when I've been using sugar substitute.
Edmund: Which is...?
Baldrick: Dandruff.
Edmund: Brilliant.
Baldrick: Still, I could add some milk this time -- well, saliva...
Edmund: No, no, thank you, Baldrick. Call me Mr Picky, but I think I'll cancel the coffee.
OK, so the cappu wasn’t up to much, though 2 out of 10 for it being hot and wet. My eye was caught by a sign affixed to a notice board…”Your journey to great coffee begins here” it read. What I hadn’t realized up until that point was that the journey probably starts on the way out of the café rather than on the way in.

The Chicken Fajita was toasty-hot on the outside but was still frozen inside.
The lemon wedge was the right colour, but that is as far as it went. If there had ever been any lemon in it, it had obviously made a quick getaway while it had the chance. And the cake was so stale it would not even bounce on the floor - as any self-respecting lemon wedge would know instinctively how to do. 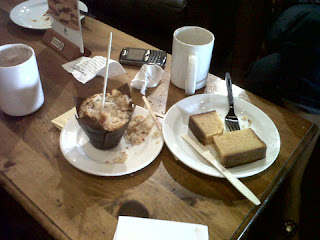 As for the raspberry and almond muffin…. Well what can I say? In our generosity we had even considered that Sushmita take it back to the office to fatten up the lovely Karen who had been left slaving over a hot computer whilst Sush went out to feed her face. But would TLK have thanked us for it? I doubt that very much. Indeed, it might even have signaled the end of a beautiful friendship.
Sush’s face said it all. “But it looked so nice in its plastic wrapping” she wailed, the thought of having to survive another few hours till dinner obviously preying on her mind. 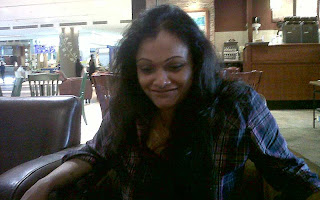 Another sign read: “No short cuts – it’s freshness guaranteed”. What we felt they had left off, however, were those essential words: “…except during the Eid holiday”. 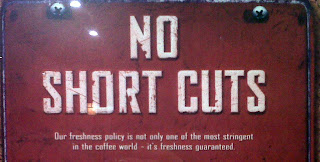 There was, of course, no point in complaining to the staff behind the counter. This is the UAE and café staff are not empowered to refund their customers’ money. “Learn your lesson and move on”, I thought; so we learned our lesson and moved on.
Sushmita would have to go hungry. TLK would have to go hungry. My wallet would feel a little bit lighter; but at least I could look on the bright side: I hadn’t got a parking ticket (this time)!
Posted by Brian at 10:31 PM