Don’t you just love it when life conspires to give the marketing men a bloody nose?
“Hummer can take it. CAN YOU?” read the sick bag that fortunate members of the Riyadh Rovers were given prior to test driving Hummer’s new baby, the H3.
We had travelled 60kms out of Riyadh, past Janadriyah, up to Thumamah Park, past the airfield and yet another 8kms on to the middle of nowhere before there was any sign of Hummer activity, in the shape of a couple of Hummer flags fluttering in the breeze and a couple of bored looking Saudi guards directing anyone who ventured forth to park their cars by the side of the road and to get into one of the many buses waiting to transport us to … well, we were yet to find out.
Thumamah Park is a vast area that used to be used by King Khalid for his weekend retreat. The small(ish) airfield which he used to fly up to from Riyadh has recently been resurfaced and reopened and is now being used most weekends – weather permitting – by members of the newly formed Saudi Aviation Club who fly fixed wing, gliders, paragliders and microlights, and who hitch half a ride in an aeroplane and then jump out into the blue yonder to experience the joys of sky diving.
Just down the road is the King Khalid Wildlife reserve which looks, as you pass, to be the place that time forgot.
But I digress. Tim had sent us all an eleventh hour eMail urging us to register by yesterday with the marketing boys in Hummer. “You’ve been chosen to be among the first to personally experience the unmatched performance of the all-new Hummer H3 as it takes on the most challenging off-road obstacles” read my ticket. “No excuses. Be there.” Well, full marks for effort, I thought, as the bus bumped and lurched its way over a twisting gravel road toward the escarpment, sending up clouds of dust in its wake.
And as we turned the final corner, there ahead of us we could see a serried row of bedou tents, a pride of purring Hummers and a hillside over which were festooned Hummer flags, helpers in red shirts and an assorted array of Hummer marketeers wearing their distinctive black and orange shirts and hats.
My bus had been filled with a huge number of Saudis who had all greeted me like a long lost brother and had then ignored me totally for the remainder of our time together. As we descended the steps, there were instructions shouted in Arabic and the hoards moved off towards different tents. Which way to go, thought I. But I saw a western-looking Hummer-meister and started to approach him. “Vous êtes juste arrivé?” he enquired of me. (Do I look French? Mind you, what does a Frenchman look like?) Answering with an impeccable “Oui” it was explained to me that the first tent was for families, but as I had either come alone or had left my good lady on the bus (what a sense of humour he had!) that I should go to the last tent and sign in. “Merci beaucoup” I mustered, thankful for all those school lessons I had sat through 40 years ago.
I was expecting someone to cross my name off an official list of those personally chosen to experience the new baby. But, no. “Please write your good name and your civil ID number and go and wait over in the queue. I’m sorry that there are so many people today that you might have to wait a little while.”
Well, I had to wait in the queue for all of seven seconds before being shepherded into the back of a very grubby bright green baby-H. Well, grubby on the outside, but a lot less grubby on the inside where that “new-car” aroma mingled with the smell of a building site.
For the technically literate, the H3 has a Vortec 3.5 litre V5 engine with 4-speed low and high automatic transmission. It packs in 220hp at 5600rpm, has a fuel capacity of 87 litres which I was told “should get you well over 500 or even 600kms” and ground clearance of 216mm. And you can lease-purchase for SR1999 a month if you have a mind to.
A Saudi sat at the wheel, overlooked by a Hummer Professional who muttered at him in Arabic, the pitch of his voice rising and falling with the level of terrain over which we were bumping. Ahead of us was a twisting path with a few boulders casually dropped in the way, around which our driving chum flitted and turned with gay abandon. We slowed down, driving chum fished around in his pocket and brought out an expensive looking mobile phone complete with camera, and Hummer Professional was asked to record for posterity the happy moment behind the wheel. 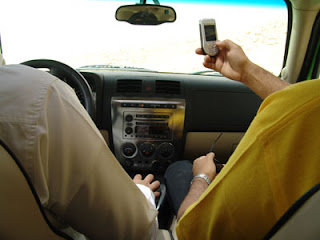 Jerk! Squeal! Crunch! The mobile disappeared down the side of the seat whilst Mr HP grabbed the wheel and the H3 came to a not-so-graceful halt. “Bas!” he ordered driving chum, and turned round to me. “Your turn! You have driven before, no?” And on my assurances that I had indeed put in a few miles behind the wheel, I climbed into the cockpit. 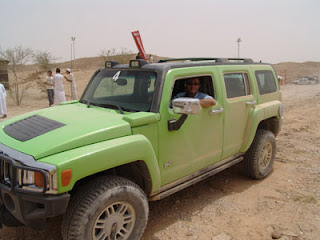 And what a beauty. Easy to read dashboard, and everything you needed readily to hand without any undue stretching (oh, Mr Jeep designer. You could learn a thing or three!) And off we went. The winding path started undulating a little more, we climbed a few little hills, and then a few more until suddenly ahead of us there was just blue sky.
“Stop” said my Hummer Kommandant as he leaned over to press a button on the dashboard. Baby-H slid into low differential. “Now drive down the hill in first gear and don’t touch the brake.” Well, it’s a weird feeling descending a vertical cliff face, fighting back the urge just to give a gentle touch of the foot brake; but I fought temptation and the H3 gently made her way in perfect control down the precipice and we arrived safely at the bottom. Most impressive.
So we rambled on over a few more so-called obstacles that even my Grand Cherokee would have no difficulty with until, rounding a corner we approached the wall of death.
“My turn to drive” I was informed – and I was indeed thankful for the opportunity to change places. Ahead of us, another Hummer revved up like a bat out of hell and screamed its way up the hill, dust flying everywhere; but about two thirds of the way up, it lost traction, its rear end spun to the left and it came to an ignominious halt at the side of the track whilst an army of helpers pushed and pulled for a good ten minutes before it was able to reverse down to safety. 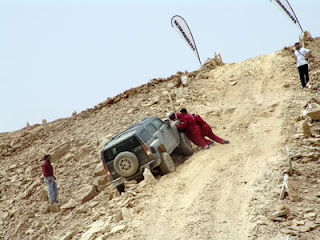 The advertising billboards at the bottom of the hill came to mind. “Couldn’t or wouldn’t?” “There is no can’t in Hummer”. I kept my mouth shut, believing in that age-old adage of discretion being the better part of valour. 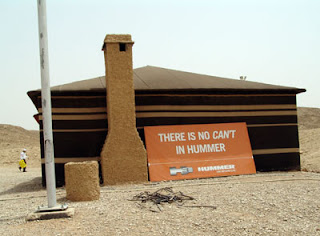 And then it was our turn. And now I know what it feels like to be thrown into space at Cape Canaveral. First you get a rumbling that starts somewhere outside, but soon travels through the pit of your stomach and on through your entire body as you are thrown back into the depths of your seat and all you see ahead of you is sky. Where was my sick bag? But no time for that, for by the time I had worked out the answer we had reached the top of the hill and cruised to a halt. Once again; impressive or what?
Everything else after that was anticlimax. Sure, we climbed a staircase of rocks, and descended a similar one, but that’s just meat and drink to any regular Riyadh Rover.
As I climbed back into the bus on my return to the impromptu car park, I couldn’t help but marvel at the simplicity of the marketeers’ craft. “Hummer. Like Nothing Else.” I can well testify to that. “For sale. Jeep Grand Cherokee, regularly serviced, looking for a good home……."