Falling out of love with Qatar Airways

A Vietnamese girl on the bus beside me appears totally confused. “You going Ho Chi Minh City?” she asks hopefully. I regret to inform her that no, I am going to Manchester; but at that moment we pull in to the yellow zone and I advise her in my best broken Vietnamese that she should get off here. Vietnamese cutie smiles an embarrassed smile, while your suave regular flyer and man about town offers his assurances that she is most welcome. 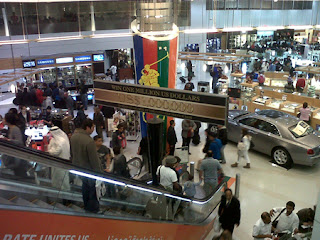 Inside the terminal the place is heaving. Thank goodness I don’t have to sit with the plebs, I tell myself smugly as I head upstairs for the Gold Lounge reserved for privileged regular flyers such as myself. 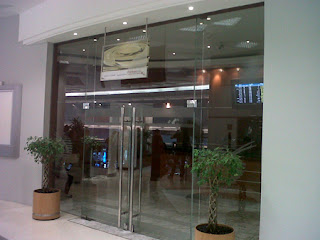 Now a quick aside here, for those who do not know Doha International Airport (DIA). Before the building of the new plebs terminal, Doha International Airport (DIA) built in 2006 a Premium Terminal which – Oryx tells us – has just been voted Best Airport Lounge for First & Business Class Passengers in the Middle East by that scion of international publications, PAX International. Qatar Airways CEO Akbar Al Baker is quoted as saying that the latest award was testimony to consistency in delivering high standards and high service levels.
OK. Now don’t get me wrong. I have a lot of admiration for Mr Al Baker. I have seen him perform on three occasions in front of the world’s press and he cuts a dashing figure and stands out from some other Middle Eastern airline CEOs in his grasp of the international airline industry. He has a reputation for being a stickler for detail; but you will never see him caught out by a journalist asking a question that he is unable to answer - unlike the CEO of another airline I met recently who managed to get wrong around 50% of the answers to questions thrown at him in a very laid back press conference. But I digress….
I really have to wonder, though, if the likes of Mr Al Baker has ever experienced the Gold Lounge for regular flyers in his Economy section. I mean, I hardly expect him to travel in turnip class, but it would be nice to know if he has visited this little corner of the airport in all his years as Qatar Airlines’ CEO. 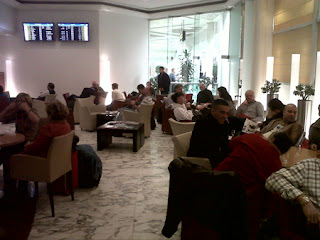 I walk in to a very overcrowded room. There are no spare seats. Some of the Gold Privilege Passengers are sitting on dirty tables or even on the floor. Everywhere there are dirty plates, dirty glasses, empty drinks cans… 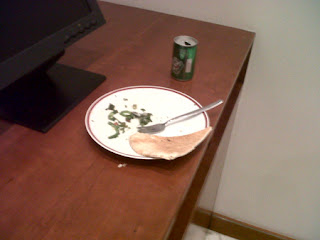 …the food on offer features a few sandwiches literally curling at the edges, no plates, two glasses only, no forks… I mean, maybe the Vietnamese cutie was having a better experience waiting at the gate for Ho Chi Minh City.
Worse still is the state of the toilets reserved for Gold members. Why is it that Arabs seem incapable of going to the loo without splashing water everywhere – across the floor, across the loos themselves, across the wash basins; and then with their dirty shoes make the place more disgusting than a pig sty (and I use that word advisedly). 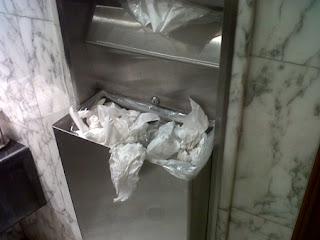 What an advertisement for Qatar Airways! I think back longingly to when I was only a half-pleb and my frequent flyer status was silver. In the silver lounge, at least there was more space and I never ever experienced a curling sandwich, though certainly the loo was as disgusting.
After a while, and well before boarding time, I felt I could stand the place no longer and went for a wander around the old terminal. At least one thing left me smiling. Qatar Airways’ marketing department had come up trumps with their daily flight to Shanghai. QR888 is the flight number, obviously dreamed up by someone with a bit of local knowledge of how to make a flight a must-try experience for the superstitious Chinese.

But let us fast forward a week to the day of my return to the Gulf. Braving the elements of a cold English winter morning, I make my way to check in (Gold and Silver Pax only) and am given the third degree on whether I have a visa for entering Dubai. Does Qatar Airways not train its employees that Brits don’t require a visa to enter the UAE? Apparently not.
But I smile graciously when I am given a card to allow me entrance to the Escape Lounge reserved for us gold card carriers. At least I won’t have to suffer an overcrowded terminal that appears to be a trademark of Manchester Airport these days. 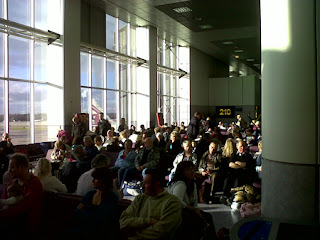 But as we all know, pride comes before a fall; and one look at the disgusting state of the Escape Lounge confirms my worst fears – that the Brit staff who “look after it” have obviously been trained by their erstwhile colleagues back in Doha. Numerous jokes relating to “Escape Lounge” now come to mind. 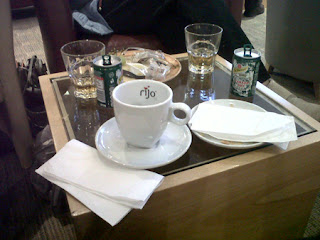 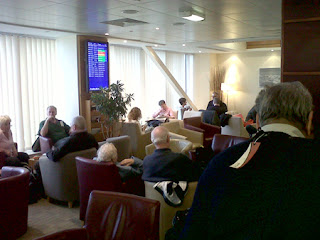 Unlike Doha’s Gold Lounge, however, there is a book case offering a selection of must-read tomes such as Bradman’s Europe – 2006 edition; there is even a large pile of Oryx Inflight Magazines, but they are all at least four months old. 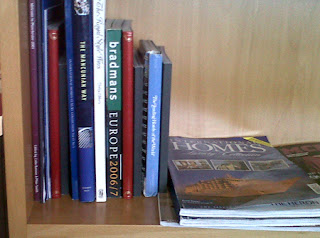 But at least they serve a choice of wines and beer here (which Doha definitely does not) and my fellow sufferers fall on the alcoholic beverages for sustenance (and maybe to dull the senses?) which of course they drink straight from the bottle/can as there are no available clean glasses. 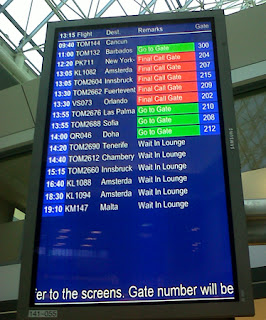 Finally my flight is called and I, together with half the lounge, spills out into the main concourse, passing the tell tale trademark dirty cups and glasses left abandoned everywhere to their fate… 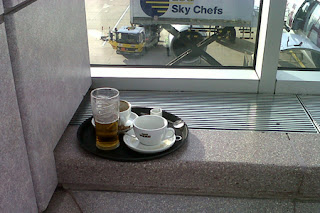 …even passing an advertisement which tells us alluringly that we can fly away from Manchester Airport for only £99 return, though it fails to mention to where we could fly for this amount. Perhaps it doesn’t matter. The main thing is just to get out I suspect. 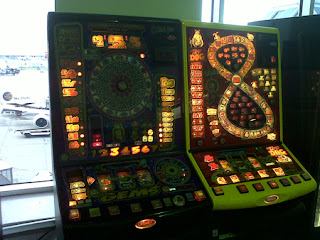 and we crowd round the departure gate willing the ground stewardesses to open the flight for us to board. Anything surely has to be better than staying in this god-forsaken dump of an airport a moment longer than is necessary.
I am happy once again to be flying on Mr Al Baker’s airline. I have a couple of Chinese ladies sitting beside me – both from Guangzhou, both incapable of understanding English, or Arabic, or Tagalog, or any other language for that matter that is spoken on board the World’s 5* Airline. I translate for them by using hand gestures and they are truly grateful when I explain to the trolley dolly that one of my new companions wants a cup of hot water – a cup of tea without the Chai, I add helpfully.
We land in Doha International Airport (DIA)  and I retrace my footsteps once again to the Gold Lounge which is standing proudly empty – even empty of dirty plates (or any plates for that matter) but at least I can enjoy a can of Club Soda or BebsiCola in one of the three glasses provided.
In no time we are boarding for Dubai Airport. In no time plus 45 minutes we are disembarking in Dubai. We experience the ever-rude, ever unwelcoming immigration officers; we pass the Duty Free shop which sells cameras at a massive mark up from what you would pay on the high Street (such as the Sigma SD14 which sells for AED5275 here, but only AED3995 in Ibn Battuta Mall – that’s a difference of AED1280 or around £250!) 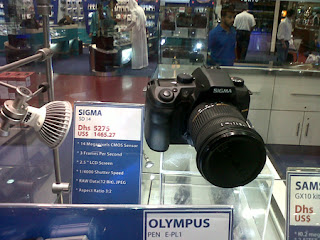 and finally out into the cool night air to wait for the start of the day’s operations of the Dubai Metro at 6am.
I glance up at the metro map in the carriage. The Metro has been running for well over a year now, but still they have on display a map showing the wrong name for Khalid bin Al Waleed station. It reads Burjuman – a name originally earmarked for the station serving Burjuman shopping mall until the powers that be decided that Khalid bin Al Waleed station had a sexier ring to it. 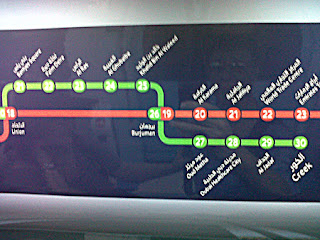 Maybe one day they will get round to changing the map. Maybe. But I have my doubts. For as we have all learned, some things in this part of the world never change.
Posted by Brian at 10:12 AM