The State of Democracy

I love this time of year. Well, I do ever since I have been living in this part of the world. The daytime temperatures are warm, but not too hot; the sea is pleasant to swim in; and once again it is time for Arabian Travel Market to hit town.
This is the third year I have worked at the show which attracts exhibitors from all corners of the globe, all anxious to entice the locals - who have far too much time and money in their possession - to part with at least one of these commodities. And just like the marketing puff that they (we) put out year after year after year, you always wonder how they can improve on last year’s show.
On the first day, hardly have I set foot through the door of ATM hall 4 (there are 8 halls altogether) than a lady comes running toward me from the TTN-ME stand waving a copy of their latest edition. Read this! Read this! she says, thrusting it under my nose. It’s such a good read. You’ll love it! And which article did you enjoy most, I ask, in mock 'innocence'. Errrr… it’s a good read. You’ll enjoy it, really you will, she blusters. I don’t labour the point as I raise my eyes to see the sign over the TTN stand. Oh dear oh dear. On reflection I think I might well indeed enjoy their magazine, but not for the reasons she hopes for.

There is so much razzmatazz here from every corner of the globe at ATM; some bring in the professional glitz and glamour to get their serious marketing messages across; others attempt a cut price job and wonder why they are taken less seriously.
On Day One I go to a press conference of Afghanistan’s Safi Airways who are keen to show off the new colours that they have daubed all over their aircraft. As the German CEO drones on about how “excited” he is that their predominantly blue logo is now a different shade of blue, a three minute video plays in the background. Three members of the Afghan National Cricket squad are sitting on plastic camper chairs on a cricket pitch, pretending to be in an airplane. Romina and Najia – two bruisers from Safi cabin crew’s all women’s wrestling team serve their pretend-passengers with bottles of water. “When I was in the refugee camp, my dream was always to fly in a plane. Never did I think that one day I would actually do so,” explains the team captain in near-perfect English subtitles. Right..... ‘nough said…. 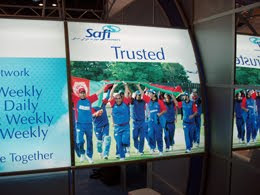 As always, many of the exhibitors are in competition with one another to see who can field the sexiest, most vibrant dolly birds and draw visitors to their stand. It's neck and neck between Sri Lanka and the Philippines, but the former wins on sheer determination as they prance out to the sound of beating drums at the slightest provocation. 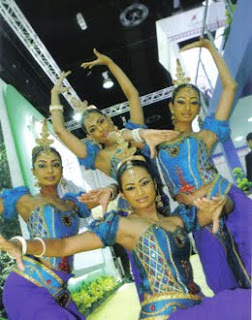 Other exhibitors choose to attract interest by dressing up in the most cringe-making costumes. Dubai Shopping Festival are the clear winners here, with one of the Incredible India representatives coming a close second. 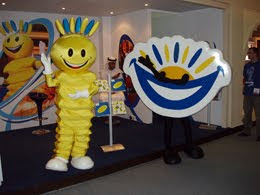 Of course, with the large number of press conferences being held over the week, there is competition aplenty to attract the journalists. Give-aways are common at news conferences, but this year the gifts are somewhat down market from what have been handed out as sweeteners in previous years. (“We never attempt to bribe journalists with our gifts,” I am told by one exhibitor. “We simply show them our appreciation before they write about us.” I can’t help but remember that even 40 years ago, the practice of accepting even the tackiest of freebies could almost be guaranteed to have got one fired from the BBC.)
Qatar Airways gives away a mobile computer case (alas, minus computer) at their conference. And to bring in the punters from the press office they also have an Argentinean-looking couple with oil-slicked hair dancing a tango – not once, but over and over until it is time for the CEO to step in and announce one of their new routes will be to Buenos Aires. A journo beside me reckons the oily duo would certainly be good enough to try their hand in the prelims of So you think you can dance? 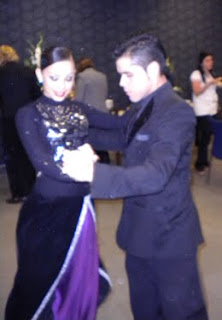 The classiest gifts have to be from the Yemen tourism board who hand out not one, but two glossy coffee table books about their country.
Of course, there are giveaways aplenty being handed out on the exhibition floor as well: fridge magnets from Macao; pencils with plastic fish stuck on their ends from the Maldives; a plethora of baseball caps from the likes of Sharjah; 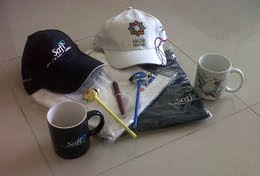 a picture puzzle from Turkey; 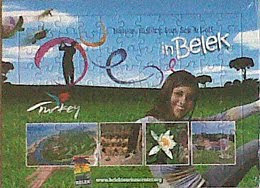 a teddy-bear pin badge from Berlin; a little rubber aircraft from Kam Air of Afghanistan (which pulls apart to reveal a USB flash memory stick); and of course loads of coffee mugs, pens, T-shirts and other paraphernalia too numerous to mention here.

From one of the European stands (though for the life of me I cannot remember which one) I pick up a Focus Sniff Box. A what??? According to the instructions, you open the lid, take a few breaths and receive aromatherapy benefits. Promote clarity of thought and awaken your senses, it says. I sniff. Once. A mix of bergamot, lemon and cinnamon (it says). I close the lid. Senses awakened. Clarity of thought … where’s the nearest waste bin? 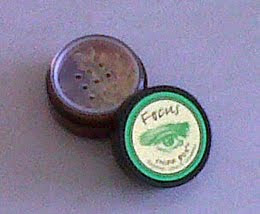 Tackiest giveaway has to be the rubber map of Bahrain which also opens up to reveal a memory stick.

At one end beyond Asia is a culture zone to get the visitors “in the mood” and which features performances of national dance and music. Highly entertaining stuff with (more) dolly birds strutting their stuff in national costumes, and the occasional musician strumming away to a filmed backdrop. Thus is the Bahraini entry – two very lonesome musicians that no-one wants to listen to. 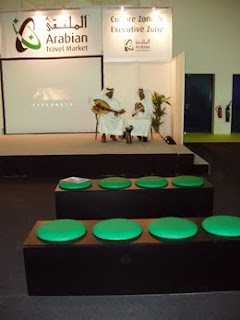 I take a picture of the empty chairs in front of said musicians and immediately am accosted by a Bahrain PR girl shoving one of her rubber maps at me, so glad is she that anyone should dare show their face here. I tell her I will always treasure her gift; but somehow I don’t think the concept of sarcasm has been fully grasped in this miniature state.
Of course, when talking about this year’s ATM, one shouldn’t forget the series of seminars tackling many of today’s pressing tourist-related issues. This year the amount of seminars has been massively increased in order that everyone should be able to come away older and wiser from the event.
I learn from one seminar that low cost airlines (LCCs in the jargon) attract the lower fare paying passengers in the market; from another that sports tourism is high on the agenda of many national tourism boards’ plans; and from yet another that, given the choice, not everyone prefers to pay through the nose for 5-star hotels. Unfortunately the seminar on HR within the tourism industry is cancelled for lack of interest. A shame. I wanted to time how long it woud take for someone to tell us that a company's most valued asset is its people.
I may well leave ATM with aching feet, but by golly I am certainly feeling a whole lot older ... and perhaps just a little bit wiser.
Posted by Brian at 12:18 PM