I find myself screaming at the radio more and more these days. I know I shouldn’t; I know it does no good; I know the radio can’t hear me; but it gets the frustration out of my system – sometimes.
Take this morning. I was driving along the road to Abu Dhabi and as the BBC World Service doesn’t start up here until 9am local time, I tuned instead to Dubai Eye Business Breakfast. Quite often they have some interesting interviews; but not, it has to be said, when they get a government spokesperson on.
This morning, though there was BIG NEWS from the RTA – Dubai’s Road and Transport Authority. Could I contain my excitement? A spokesman was going to be interviewed from an actual Metro train. He was traveling with the entourage of the RTA’s Chairman, and Executive Director Matar Al Tayer. And the big news was…..??? That His Excellency was actually travelling on a metro train. It was totally unannounced. A spur of the moment decision. He was going to travel on the metro that he was responsible for running. And as if this wasn’t enough, he was even planning to go on a bus and a water taxi in the next week or two as well. I mean…. Wow!!! 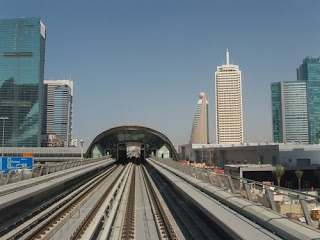 So we listeners were obviously lucky that by some quirk of fate Dubai Eye had learned of this amazing visit and had had the presence of mind to arrange an interview with the RTA’s PR spokesman.
Cynical? Moi? Oh common!!! This is the UAE for heaven’s sake. That the actual guy who makes the decisions regarding this little train should actually travel on it is amazing enough. That he is just short of royalty makes it a double whammy.
Unfortunately, this being the UAE, the presenters didn’t think to ask some of the more obvious questions that might spring to mind by the average Metro user in Dubai. Why, for instance, is the Metro closed on Friday mornings until 2pm – when those who would use it more than anyone else are the very people who have Friday mornings off. Could it be that as Emiratis sleep in late on Fridays, they assume everyone else will too, and no one has had the temerity to point this out? 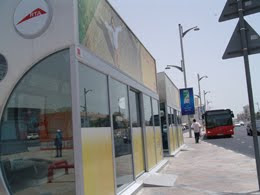 Why for that matter have they just killed off the night buses running from the airport? The official answer I was given when ringing the RTA’s hot line the other day was that now there is a Metro, the buses are no longer needed. Except for one little matter – that the trains stop running just after 10pm, not to start again until 6 in the morning. And as the majority of flights arriving in Dubai do so during the night, that means that apart from taxis, one is expected to wait throughout the night for a bus??? The RTA operator asked if I would wait a second while he checked the time of the last train. And that in itself gives one cause for concern, since there is only the one line. You'd think he might know that little fact by now...
What the toadying sycophants on the radio DID point out, however, was that they now allow passengers to take suitcases on the metro when they are going to the airport – something they had banned for a good few months while they considered the pros and cons. “We thought about this long and hard,” the spokesman said, “but eventually realised that some passengers might find this a useful facility if they were allowed to take them on.” Presumably, that is, assuming they don’t arrive between 10pm and 6am.
The fact that those who make the decisions never seem to use the city’s transport system might also account for the fact that there appear to be almost no signs whatsoever to inform passengers arriving in Dubai how they can get from the airport to their destinations. Is it assumed all passengers will use the absurdly overpriced taxis? Before you even leave the airport, there is a flag fee of 20 dirhams ($6) added before you set off. (A word to the wise – if you use the long term car park bridge, you can hail a taxi from the other side of the street for 20Dhs less!)
The RTA did a sterling job in recognising that Dubai had a severe traffic problem, so they set about planning four metro lines and a plethora of new bus routes. OK, so the Red metro line still isn’t complete nine months after it was due, whilst the Green line will not be ready now until next year and work on the other lines has ground to a total halt. Never mind the idiots like me who planned their accommodation on the basis of being able to use the new metro line only to find you cannot rely on the promises of a government spokesman as to when that station will actually open.
As Orwell’s Napoleon in Animal Farm remarked, All animals are equal; but some animals are more equal than others. So maybe I’m being a bit harsh actually expecting the decision makers to use their own bloody railway. But maybe – just maybe – the experience might open someone’s eyes as to what real people are being asked to put up with. Oh tush…. Who am I kidding?
Posted by Brian at 12:36 PM