I've arranged for us to go on a small outing to the desert roses fields, said Renee, as the two of us were contemplating the best way to spend a weekend in Qatar after I had made my way over on a 'business trip' from Riyadh
The monthly QNHS trip seemed an ideal way to spend a Friday; and as my car's air conditioning had decided to pack up the day before I left Saudi Renee arranged for us to get a lift from a Danish couple who had been in the sheikhdom for at least three months
We all met up at a garage on the outskirts of Doha where 41 cars of varying descriptions were already gathering ready for the big 'off. Unfortunately many members of the club had made other arrangements for the day but despite that, the self appointed leader shouted out in a loud voice that as we were going to be driving off-road, it was totally impossible for anything other than a 4x4 to come on the trip, so would everyone please arrange which car they would be travelling in. 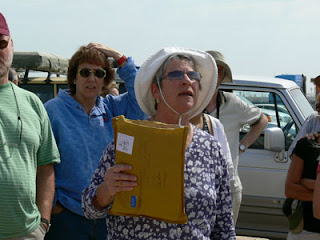 Suddenly our 'small' trip got even smaller. There must have been 12 saloon cars in this motley collection, so the convoy was straight away decimated to only 29. We were lucky in having such a strong decisive leader as the next thing we learned was that each car should have a Post-It note strategically positioned in the rear window with a number on it so that everyone would know who to follow.
Unfortunately, ours blew off at the very first opportunity but amazingly, given the fact that we were at the very front of the group, the remaining 28 cars still managed to work this out.
Of course, as we would be travelling at least 50kms to get to our destination, everyone made sure they had enough go-go-juice in their tanks to get there and back. Just as well as we only passed three petrol stations on the entire trip, and eventually we snaked out onto the main road - sorry, building site.
One of the reasons that we were the lead car might have been that between us we had three GPS units, so despite the fact that we had to make at least four right angled turns on the journey, we didn't once get lost. (Later on, one of the party confided that he wouldn't dare go into the desert without a GPS. Imagine being stranded at least 3km from a road and not knowing which way to go. It doesn't bear thinking about.)
A good 12 minutes into the journey we were told to make sure we were properly buckled up and to hold on tight. We were about to go 'off road'!
Now, to the uninitiated who are used to the Saudi off-road experience, one's first reaction might have been "who swept that road last night?". There we were travelling at speed along a well manicured track with the occasional pebble lying carelessly abandoned to upset the unwary. Either that, or there are so few off-road tracks in Qatar that the constant thundering of 4x4s had pummelled this one dead flat. 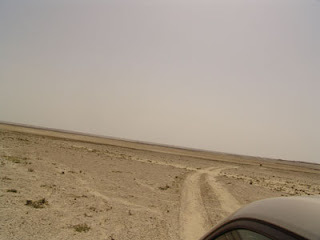 Oh, OK, so we exaggerate a little. There was a small amount of 'wash boarding' on the track, and every so often our Danish Mrs would shout hysterically to her Danish man to watch out for the ridges. Thank goodness she was well strapped in!
We must have travelled a good 18km before we learned that we would shortly be travelling down an escarpment to the rosefields. Hold on tight, we were told as we descended the perilous 12ft slope to the plain below.
Horror of horrors, there was another group there before us! What to do? As the plain must have been no more than 3km wide it was obvious to all that the only thing we could do was to park a good 10m away from the first group - at which point our new party was once more up to 40 strong.
Ahead of us was what looked like the remains of a moles' extravaganza after a good night out. Could yet others have been there before us? Mafi mushkillah! Many in the party set to digging further down into the already made holes, rather than starting off new ones. Who knows? The previous 'excavators' might have missed a rose!
But what to look for? After half an hour of frenzied digging, our Danish chauffeur stood up in his waist-deep hole — which was beginning to look like a goldfish pond as he had already broken through the water table - and gathered everyone around; they were given a lecture on what a sand rose was, how to recognise one, and tricks of the trade he had learned when he had unearthed his first rose a fortnight previously. 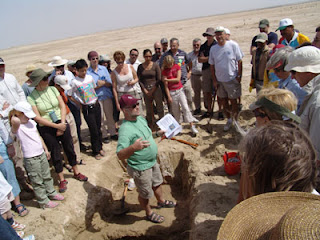 Once again, fired up by this oratory, the party jumped back into their holes and set to at fever pitch.
I've found one, shouted someone and as everyone clustered around to look at this amazing specimen, suddenly more and more were being unearthed. 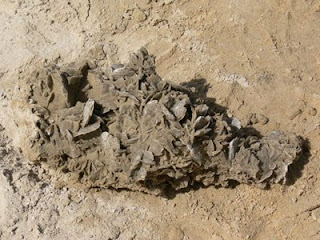 Renee had by now wandered off on her own, her pockets bulging with specimens she had picked up off the surface a few metres walk away. Well, you know what happens when you let out a careless comment. Suddenly it was like the Klondike all over again. Sweaty bodies who were already deep within their trenches heaved themselves to the surface and ran the 50m to the abundant supplies lying on the surface as Renee and I headed off for some well needed (Heineken) nourishment.
Sad to report that the gold rush was in such full swing that many people hadn't had time to start their lunch before the self-important leader declared it was time to move on to the fort.
Life really doesn't get much better than this. Two action packed outings in one day. Hold on tight and off we go....for at least three minutes, until we all corralled into a 4x4 laager at the bottom of another 'escarpment'.
"There's an easier way up from behind" proffered one kindly old gentlemen as he contemplated the prospect of clambering up a 3m high rock face to the 'fort' at the top.
The problem was that with the 100+ people having disgorged from their 40-odd cars, you couldn't actually see the fort as it had probably been built for a hermit. And when you did finally manage the incline to the top, what did catch the eye - well, maybe half of the eyes present - was a female in micro-hot pants posing against the fort wall for the benefit of her admiring suitor.
The remainder of the eyes were searching around the ground for pottery fragments and fossils (no dear, that's a stone) whilst Renee gave an exposition to those who would listen about desert hyacinths and dead men's thumbs (they remind me of a phallus, R said, though I assured her that I wouldn't be seen dead with one looking like that). 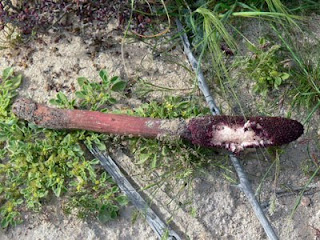 There were even the rusting remains of a bus, dating back heaven knows how many years, in which many were understandably anxious to have their photographs taken. 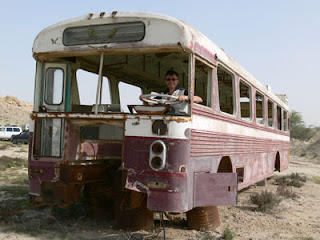 But all good things must come to an end. Our Danish couple set off in the lead once again - oh let's just show you this canyon on our left, Mr Dane said pulling hard over into a dead end. Unfortunately the followers and stragglers hadn't noticed and by the time we had extricated ourselves from the 'canyon' they had all but disappeared (should we, after all, have reinstated our Post-It note?) and were obviously too stupid to have worked out which way we would have led them.
Whatever the reason, we drove back to Doha in a convoy of one.
"Oh look", said Mrs Dane, "a camel!" But Mr Dane steered carefully around the handsome beast and we were left marvelling at this wonder of nature as we headed back into the capital.

A Survivor’s Guide to Driving in Saudi Arabia