Chatting up a Filipina

Long ago, when I was still a teenager, I remember being given a present of a book. I cannot remember if it was for a birthday, or whether it was simply meant as a joke present, but it was called The Lover’s Dictionary. It was a big hit in those days; a 5-minute wonder that everyone rushed out to get a copy of and which then disappeared into obscurity, never to be heard of again. 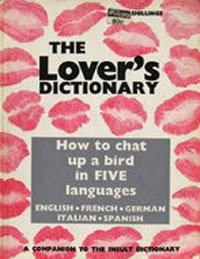 The front cover had loads of lip prints all over it, and a box in grey carried the sub-title…How to chat up a bird in five languages. Inside, the publishing date was clearly marked February 14th 1967 – so perhaps I had been given it as a Valentine’s Day gift?
I came across my old copy again recently and spent an amusing hour discovering the German, French, Italian and Spanish equivalents of such useful expressions as ‘my etchings are away being framed’ or ‘I couldn’t help hugging you as I was so excited by the game’ or even ‘I couldn’t possibly marry you as my wife would object’.
The introduction spoke volumes for the shy retiring kind of guy that I have always been (!) – ‘The Englishman’s reputation as a lover abroad is not an impressive one. Natural reticence is to blame as well as a chronic inability to express himself in any other language but his own. He cannot rise to the hot breath and the passionate gesture of his continental counterpart; his eyes do not flash, his bosom does not heave; his approach is without nicety, lacking the suggestive subtlety of the Frenchman, the gay bottom-pinching abandon of the Italian or the smouldering intensity of the Spaniard.’
Yes, you must remember that way back in the 1960s mainland Europe still seemed like a million miles away, let alone any other continent; and the English were renowned across the world as being hopelessly unromantic. How we yearned to acquire some of the panache and easy-going chat-up lines of our continental peers.
Little could I imagine the delights that were awaiting me further afield.
The book also gave due warning to the would-be Don Juan: ‘He should remember that remarks that verge on the outrageous are more easily forgiven in the foreigner…but if the law of averages works against him and he is rewarded with ten face slaps to every responsive heart-beat, he may well consider this fair return for his love-labour…’
Some of my friends regarded a slapped face as a badge of honour – a rite of passage to be looked forward to. For my part I cannot even remember the last time I had my face slapped; but in retrospect I cannot complain. I certainly had my ‘fair share’ of foreign girlfriends.
I was also lucky in that I worked for the BBC World Service, which in those days broadcast in 40 languages; and what I discovered was how each nationality responded totally differently to being chatted up. To some I must have sounded brash and uncouth. To others, I was a shy and retiring type to be told I was ‘the perfect gentleman’ – a dreadful epithet that labels one as either gay or, worse yet, hopeless in bed. (I still remember the first time I went to a disco in the German-speaking part of Switzerland and being shocked that the girls asked the guys to dance!)
I’ve grown up (a little) since those days now. But still, it never ceases to amaze me how different nationalities react in different ways to a simple compliment, or a suggestive flicker of the eye, or even of a flirtatious one-liner. Mention to a French lass that she is looking good, and she accepts it as a matter of fact and is already waiting for the follow up compliment. Tell the same to a Chinese girl and she is likely to giggle hysterically behind a raised hand and go red with embarrassment.
Tell an American girl that you like her outfit, and she immediately thinks you are trying to get her between the sheets; whilst a Saudi girl will be shocked and start looking over her shoulder in case there are any religious police nearby.
But pay any compliment whatsoever to a Filipina or send an email or two in a warm and friendly tone and you can be sure you are already ‘may gusto’ to her, and it is only a small matter of time before the entire community ‘knows’ that you have the hots for her and she is probably working out a timetable to introduce you to her parents.
It reminds me of the well worn joke: Did you know that you lose 150 calories every time you have sex? Unless you happen to be an Arab, who is more likely to lose around 2500 calories. They still consume 150 when having sex, but lose the rest rushing around telling all their friends about it afterwards!
How I love Filipinas … but I really must stop paying them all these compliments. Ipagpaumanhin. Di ako maaaring makipagtagpo sa iyo. Kailangan mong pumila tulad ng iba at maghintay ng iyong pagkakataon ako'y iyong mapaibig..... {slap}
Posted by Brian at 12:17 AM