Wake Up and Look Around!

It often surprises me how little of the world people take in around them. When surrounded by the ordinary and the mundane it's so easy to take things for granted that curiosity is seldom stimulated … and that's a pity because I'm sure we all miss out on so much to enjoy.
I fear I'm as guilty as anyone else in this respect and it was brought home to me recently when a friend who was visiting me in the UAE, where I currently live, remarked what beautiful lampposts we have in Dubai. Lampposts??? I remarked in astonishment. I mean, can a lamppost be beautiful? 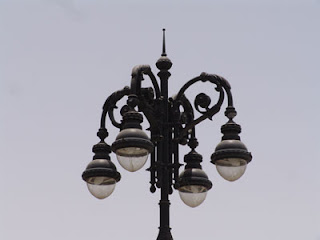 Well of course they can. And when I was next out driving to the other side of town I was amazed how I had routinely passed by these – dare I say it – works of art, without a second glance. They had flowing lines, beautiful curves and arches, needless decorations that someone had obviously taken a great deal of trouble over. And, yes, they were beautiful.
I'm lucky in that my work takes me to a number of countries. I love travel and have always thought of myself as having a curious mind. This past month I have been in the Philippines. Most of the time was spent in Manila – a dirty city where the residents seem to take so little pride in their capital. Yet pride of place must go to the city's lampposts. Yes, that's right. Forget the Coconut Palace. Forget Tagaytay. Even the likes of Antipolo pale into insignificance compared with the town's lampposts. 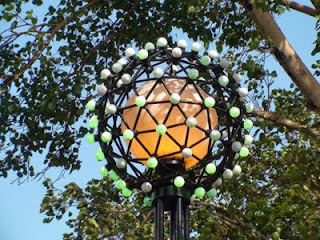 Drive down Roxhas along the filthy Bay View area and the redeeming feature is the plethora of designs stuck on poles for all to see, or more to the point, for all to see by. Some are grotesque, but in a fun way – a bit like the Victorian architects of 100 years ago used to smother their designs with filigree and twirls and baubles simply for the fun of it. I love them; and promptly started shooting photographs of every lamppost that took my fancy. I ended up with more pictures of lampposts than other more "worthy" monuments!
In a way it's a bit like the huge variety of gaudy designs on the city's Jeepneys: a utilitarian mode of transport which is transformed into a moving work of art. Sure, they're filthy, sleazy, unsafe and noisy and a load of other unflattering epithets could also be thrown their way. But there's a fun element there too. And I think this speaks volumes for the residents of this dirty city.
One day, however, I was taken through Marikina on the way to Antipolo and it was as if someone had taken a permanent marker and drawn a line in the street. On one side the debris, filth and sleaze of downtown Manila. On the other, clean streets, parking that was well thought out, and a river which was clean and appealing. It reminded me of the border fence between Saudi Arabia and Qatar where a visitor from another planet might well have concluded that the Qataris threw all their rubbish over onto the Saudi side.
Why is it that we all turn a blind eye to the unpleasant aspects of our environment? Both Qatar and Marikina amply demonstrate that it is perfectly possible to improve our surroundings by making the environment a nicer place to be in.
And Manila's lampposts show that although civic pride apparently disappeared a long time ago, there is still the propensity for beauty to rise out of ugliness. I can only hope that the residents of the Philippine capital can wake from their torpor and realise what they have been missing out on for all this time.
Posted by Brian at 12:24 AM