I was driving down Olaya Street the other day in the early afternoon when I noticed the road was completed blocked. Well, perhaps 'noticed' is an understatement. OK, I was stupid enough to be trapped in this no-go area for all of 15 minutes at school chucking-out time.
I should have known better. Yet it never ceases to amaze me how many of our host citizens think nothing of parking five abreast in the middle of a major road simply because they cannot imagine having their dear little offspring walking the 20 yards down the road where they could have parked with zero problem right next to the curb. And they are worried about child obesity?
Which brings me neatly on to selfish parking. You'd think with the amount of car parks that finding a space wouldn't be so difficult would it? I mean half the shopping malls have underground parks, and I get the impression that when they design a new shopping mall, they start with the car spaces and see what type of building they can fit into the rest of the available space.
So why is it that parking has become such a big problem? It couldn't possibly be because some drivers are just the slightest bit selfish in their parking habits could it? How often do you see cars parked at an angle across two spaces like the drivers owned the car park (well, maybe they do)? Maybe it's to avoid having their precious vehicles scratched when someone opens the door of the vehicle beside them.
Or worse still, the drivers who park right behind you, blocking your exit while they go in and peruse the goods in one of the shops along the street. You honk your horn and eventually someone ambles out, climbs in to their motor and drives off without a word of apology. 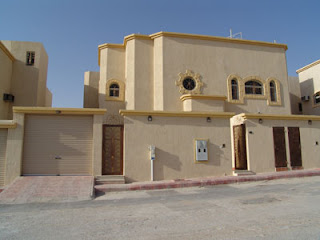 Now, I'm not for one moment advocating violence, or breaking the law, but the other evening I arrived home to find the garage entrance blocked by another car. Up and down the street in all directions there was lots of available space for parking, but instead this selfish BMW owner had decided to block my drive. I should perhaps add that it was well after midnight, so it didn't feel right to lean on the horn.
So instead I tried something different. Having parked my own car further down the road, I got some large rocks and placed them behind and in front of each tyre of the BMW such that it would be impossible to drive off without first removing them. Then I 'borrowed' two of the large yellow dustbins you see all over Riyadh exhorting everyone to keep the city tidy (keep?). I placed one immediately to the front and one immediately behind the BMW. And then I went inside and waited.
And it wasn't that long before the BMW owner came strutting his way out of a neighbour's house only to have to heave the dustbins out of the way before he could even think of driving off. Except, of course, that he couldn't since the boulders were stopping him going anywhere. So he had to get out of his car again and in the pitch black find the rocks and move them out of his way. After which he roared off into the night.
Somehow I don't think he will think of parking in front of my drive again in a hurry.
They say that education is a wonderful thing. That, of course, and revenge.