For the love of a Kia

I have to admit to having a love affair with my car. Well, not the actual car itself, you understand as it is, dare I say it, one of those ubiquitous grey boxes churned out by the Kia Motor Company and which sells to cheapos like me who drive their wives crazy by trying to save a few dirhams on the cost of a new car.
She (her indoors, the boss, my better half – call her what you will) thought she had cured me of this terrible affliction when we went from the sublime to the ridiculous many years ago.
I had been the proud owner of a Fiat 124 Sports car, paid for after a windfall payout for some work I had thrown together back in the heady ’70s. It was classy; it was fun; it was even (on occasion) a babe magnet. It was my pride and joy until the day the garage forgot to tighten up the oil sump screw and I became the proud owner of a pile of twisted metal.
Distraught – nay, devastated – I determined never to fall in love again (with my car that is) and plumped for an economical motor which wouldn’t blanche at the ever increasing price of petrol, following Sheikh Yamani’s OPEC price hike. And I found one. A car that most of my contemporaries have never heard of, even to this day.
It was a Honda 360. Sure, it was small, but it actually boasted a rear seat which, we later found out, was more in the spirit of hope over expediency. It sounded like a sewing machine running in overdrive which, it turned out, was not far off the mark. My wife took one look as I drove it up the garage path and almost exploded; which was nothing compared to the time I tried to manoeuvre up a steep hill which the 360cc engine had great difficulty in coping with until she-who-must-be-obeyed had to get out and walk, with the promise that I would meet her at the top of the hill… if the car ever made it. (It did!)
Fast forward 30-odd years and I find myself in Saudi Arabia looking for a cheap set of wheels. My criteria were simple. It had to be four wheel drive to cope with desert conditions; it had to have A/C; and it had to be “affordable” (or, in wife-speak: cheap). A Jeep Grand Cherokee with sumptuous black leather seats and dominating everything else in the car park around it called out Buy me! Buy me! siren-like as I kicked its tyres (why do people do that???), admired myself in the rear view mirror and finally parted with some well-earned cash to a Saudi gentleman who appeared well resigned to the fact that I had used my well-honed bargaining skills to beat him down by a large percentage of his original asking price. 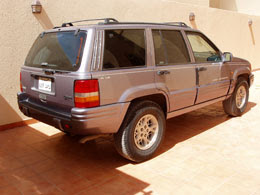 Within a month I was cursing the Jeep in language that I had previously used for my Honda. Certainly it was a monster on petrol, but given the fact that I could fill its entire cavernous tank for around SR25 (except when I drove it across the border into the UAE where the price suddenly shot up three-fold) this wasn’t too much of a problem. The continuous drifting to the right caused by badly adjusted wheel bearings was easily corrected by sitting hunched up against the door. And the steady drip drip drip of oil, which marked out the territory canine-like around my apartment was something I learned to live with. More problematic was the ever-present scrunching noise that occurred whenever I had the temerity to change up to fifth gear, and the suspension which felt as if I was driving a sofa down the King Fahd Highway.
One day, I decided to drive the 1,000 kms from Riyadh to Dubai across a corner of the Empty Quarter via the southern route through Al Kharj, rather than the well worn Dammam Road. It’s a beautiful drive on the Saudi side, through rolling dunes kept at bay by an army of workers from the sub continent spraying black oil onto the ever shifting sands. I would catch myself laughing out loud whenever I caught sight of one of the many signs that admonished the driver that there were sand dunes on either side of him…. Just in case he hadn’t noticed!
Another of my favourite signs awaited me as I drove through the farther reaches of Abu Dhabi. “Beware of Road Surprises” it read. I have always assumed this to mean “Be prepared for the unexpected”; but I always wonder who it was that thought it up; and further, why no one had the temerity to question it before it went into mass production wherever it is they make these signs.
On this particular run, I blew a tyre some 100kms from the Saudi/Emirates border; my battery went dead when I parked over night in Dubai and a sudden sand storm on the return journey frosted out my headlights to the point where it was almost impossible to drive at night time. I also had to top up the oil in four different garages on the way home. Beware of road surprises? I’ll say!
I got rid of the American monster soon after that and began my love affair with Korean boxes on wheels. 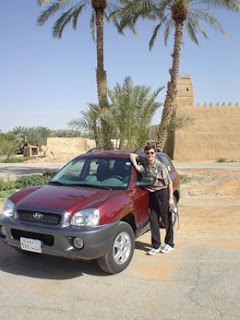 They may look boring, have zero sex appeal and struggle to reach 120 in under half a minute… but, by golly, they are certainly cheap.
Posted by Brian at 11:41 AM