Concerto for Nokia and Orchestra

Is There A Local Word For Culture?
I was talking to an Emirati the other day about what in his eyes made the United Arab Emirates so special. His eyes lit up as he prepared to indulge in what appeared to be one of his favourite monologues.
The UAE, he intoned, has only been in existence for 36 years – yet in that short space of time it has given rise to one of the highest per capita incomes in the world whilst at the same time is a melting pot for nationalities from right across the globe. “Here you will find freedom of expression and huge opportunities for everyone, which is why there is such a huge influx of people and why so many people are making large amounts of money.”
I forbore to tell him that the money was in the main being made by the locals on the back of the hard work of imported labour – mainly from south and south-east Asia – who were becoming more and more disillusioned with the way ever rising prices were diminishing what was once an attractive get-rich-quick proposition but that now meant that many an Indian or Pakistani worker could in fact be better off if he found a job back home.
But his clincher really got me thinking. “You could think of the UAE as a cultural meeting point and here you will find cultures from right across the world are all well represented and embraced.”
Now, this was an argument that took me totally by surprise. I have lived in the Middle East now for nearly ten years – the majority of it in Saudi Arabia, where the local cultures are there for all to see and experience. Love it or hate it – and I have to say I am personally very enamoured of the Saudi traditions – you cannot escape the ever present culture of a proud people.
But the UAE? Apart from a few short dances involving Emiratis throwing model rifles in the air and waving their canes about, whenever there is a grand opening or a national day celebration or whatever, I had never thought of the Emirates as being cultured in any way whatsoever.
“Look what is happening in Abu Dhabi,” he continued, warming to his theme. “There they are building a new Guggenheim museum, which will stand cheek by jowl with a new Louvre. Go to the Emirates Palace Hotel where there is currently an exhibition of the works of Picasso. Or look no further than Al Ain where every year they have an international music festival which is vying for a place on the international music festival circuit.”
I could hold back no more. I have visited the Picasso exhibition three times and could count on the fingers of one hand the number of Emiratis I have seen there.
And this year I actually did go to the Al Ain music festival, unlike the majority of Emiratis. For nine days there was a series of concerts held in a variety of venues such as the Al Jahili fort – superb backdrops for what could have been some memorable evenings. But no, in fairness they were memorable, though not as high class cultural events, unfortunately. 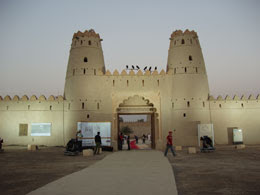 On one evening, for instance, they had the first performance in the Gulf of Mozart’s Don Giovanni sung in Arabic. Singers had been imported from Lebanon and Egypt and the Warsaw Philharmonic Orchestra flown in from Poland to perform in front of the local sheikh, together with anyone else who cared to drop in for a bit of culture.
True to local tradition, the sheikh arrived about 40 minutes late, everyone followed in to take their places and the concert began. The sheikh appeared to enjoy himself and laughed at the bit where Leporello sings about the “conquests” of his master which include 1,003 seductions in Spain alone. (Could this have ever happened in Saudi? Well apart from the fact that concerts are banned in the Kingdom, who would ever dare perform an opera about a womaniser bent on seducing every female he meets?) But if said sheikh can laugh at the naughty bits, then it must be OK – so everyone else joined in the muffled laughter so as to be in with the crowd. With plenty of Yalla Habibis and Leporello hardly able to keep his paws off  Donna Elvira’s tits (got a good guffaw from Al Sheikh!) a good time was had by all.
No one minded when Don Giovani (also referred to as Don Juan in a couple of places and even Al Don - now that’s more like it!) laddered his pop socks when his sword got caught up in his costume. When the Commendatore was killed, they used a red sash to represent the blood covering his white tunic (no, not a dishdash!). Very convincing, until the red sash slipped off the body, and the body had to come to life again just long enough to move it back onto his chest!
It wa a shame though that come the interval the sheikh suddenly remembered a pressing appointment elsewhere and as he hurried off, so did the majority of the audience leaving the performers singing to a half empty house.
Fast forward two evenings to the first performance of بيتر والذئب - Prokoviev's famous children’s masterpiece Peter and the Wolf sung in Arabic. Here the rich tones of a famous Arab actor were accompanied by a student orchestra from Italy. He had a beautiful voice and it was quite poetic to listen to - he even did the duck and bird voices a bit like a tom and jerry cartoon!
But as the evening wore on, and as the next work to be performed was Beethoven’s 5th Symphony, a cacophony of mobile phone calls almost drowned out the strains of the orchestra. Concerto for Nokias and Orchestra might have been a better title for Beethoven’s classic. Emiratis, it appears, (and it was almost entirely the Emiratis who were behaving in this way) are inseparable from their phones, even when it involves interrupting a public performance to the detriment of everyone else.
So my conclusion from albeit limited experience here in the UAE is that the local tradition of throwing money at something, purely to proclaim to the world how cultured the Emiratis are, fools no one. And the relative handful of expatriates who actually bother turning up to these events only underlines how uncultured the place actually is.
A place on the international music festival circuit? Hey. Pass me my mobile phone. Just don’t make me laugh!
Posted by Brian at 11:52 AM