Lowlife in the UAE

I felt sorry for Walid Abdullah. There he works day after day after day in the presence of petty criminals and the low life of the Arab Emirates. He even raises a smile now and then, bless him. I know. I was one of his ‘customers’.
My crime was nothing short of parking across the corner of one of the disabled parking bays in the private car park of the apartment block where I live. They are keen on disabled bays there. On the ground floor of the car park there must be well over a dozen such bays, though I have yet to see even one disabled visitor to this monstrosity of an accommodation block.
The people who planned the tower block (I presume someone must have planned it, though I’ll bet they are trying to remain incognito right now) saw fit not to build the main underground car park under the tower block. Instead you have to drive down a slope, park, walk up the slope, down another slope, walk down some stairs and then take the lift up to your apartment. Anyone with shopping / luggage / tiny tots is well and truly stuffed.
Not surprising therefore that many people park their cars in the disabled bays rather than face such a marathon every time. And, perhaps like me, they too were highly surprised when the local police came and gave out parking tickets – not just ordinary parking tickets, but ones with a AED1000 fine – that’s around $300 for heaven’s sake, PLUS four black points on your licence.
Now for ordinary common or garden misdemeanours such as speeding, tailgating and the like, you can pay your fines from the comfort of your arm chairs. But for us hardened low life, we are obliged to go to the traffic department, present our licence together with the required pile of dirham notes and show the right level of contrition.
So I duly turned up to find a queuing machine that gave out tickets to ensure an orderly stampede of miscreants eager to part with their hard earned cash. One of the options was for a queue for those who wanted to contest their fines. Oh, silly me. Why did I even think it was worth asking what business it was of the local police to guard disabled bays in a private car park? Maybe it was the phase of the moon; maybe I had not been sleeping well recently.….
My number was called and I was directed to a Bruenhilde look-alike whom you certainly would not wish to meet in a dark alleyway around midnight. She was yakking away into a mobile phone and thrust out her hand at me waiting for the details of the crime I had committed. I smiled; she glowered; I handed over my summons; she grabbed it; I asked if one was allowed to contest the right of the police to operate in a private car park; over there, she said, continuing almost uninterrupted into the mobile as if I simply didn’t exist. It left me wondering if she had at one stage been trained in the Dubai Airport school for immigration officers. 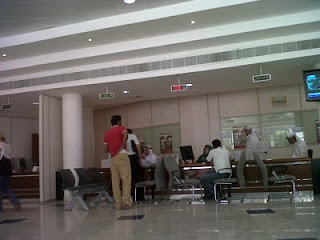