I must be truly grateful to my dear friend Sushmita. Whenever she is able, she flies on Emirates Airline, paying through the nose for the privilege of flying with this second rate airline. She appears to love the experience, appears to love passing through the long retail corridor known as Dubai Terminal 3, and even upgrades to Biz Class when she wants to pamper herself… just a little more than normal.
I, on the other hand, am (normally) a die-hard Qatar Airways aficionado. I can’t stand the Emirates experience and cannot understand why anyone would pay well over the odds for second-rate service. (Example: Typical Dubai to Hong Kong return with Qatar = 2900Dhs; with Emirates = 4200Dhs.)
So it was so good this evening to know that Sush’s hard earned money was being put to good use: in this instance pampering my taste buds and filling my stomach with prandial fare from around the world.
On the evening before Arabian Travel Market kicked off, Emirates Holidays decided to have a shindig to which were invited.. what… nearly 1,000 people? I duly picked up Sush at the appointed hour and chauffeured her in the style to which she has become accustomed to the Asateer – that flagship offering at the outrageous Atlantis Hotel, a specially constructed tent that is normally put up for Ramadan iftars, but for which the Atlantis is obviously hoping to get its money’s worth by using it at other times of the year to pour alcoholic beverages down the throats of its partying guests.
No one appeared to worry for one moment who we were. There were no written invitations; no one wanted to know who we were, why we were there or what connection – if any – we had with Emirates. It was one of those grand receptions where no one really knows who is receiving whom. But no worries. Tray-loads of red (Chilean) beverage, white (Chilean) beverage, brewed beverage, distilled beverage and – yes, I’m sure I spotted some – zero-percent beverage were thrust under our noses as we wandered into the grand marquee which had ice sculptures liberally scattered around the place with large fans directing some of the chilled air conditioning in their direction to slow down their inevitable self destruction. 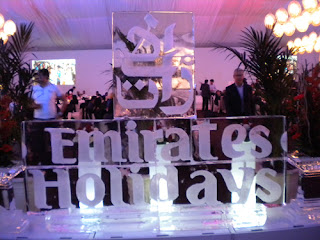 The place was filled with tables stretching to the horizon, each place setting boasting not one, not two, not three, but four glasses together with what must have been equivalent to Sheffield’s annual output of cutlery. 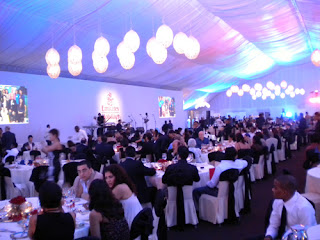 Of course, we all know there is no such thing as a free meal… and in this case we had to sit through an entire 10-minutes’ worth of prizes being handed out to Emirates’ sales reps and other notable worthies in the Emirates empire. First prize was an all expenses trip to Hong Kong to stay for three nights at the Island Shangri-La Hotel. Sush and I exchanged glances. How much better it would have been if they had sent them to the better Shangri-La on the other side of the harbour in Kowloon, (where, incidentally, Sush and I had first got to know one another on a press trip all those eons ago.)
The prize giving firmly out of the way, it was time for the real reason people had turned up – to stuff themselves as fully as possible thanks to the ill-gotten profits made possible by such hapless regular flyers as Sushmita.
We were told there was food from all corners of the globe, representing the myriad of locations served by Emirates. And as promotional videos showed off tempting holiday locations from the Emirates catalogue of far-flung places, we gorged on lobsters and steak and lamb and fish and loads of I-have-no-idea-what-on-earth-that-is-but-hey-I’ll-try-some-anyway-morsels. There was even a strawberry tree boasting gob-stopper sized strawberries from which one could help oneself; 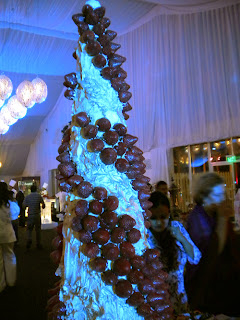 or a marshmallow tree; or a meringue tree and sweets of every description. 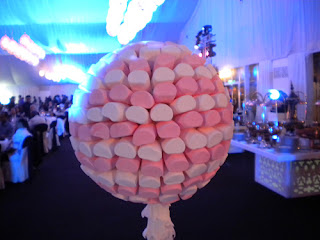 Being one to push his luck, I asked one of the poor waitresses, who looked like her feet could have benefited enormously from some TLC, whether we were able to get a cup of coffee to wash it all down. An embarrassed look – but only for a couple of seconds until she composed herself. I’m sure her training taught her that the customer must always be pampered and if he wants a cup of coffee, then she will find a way. She did find a way. About ten minutes later she reappeared with two cups of very tepid Nescafe (Had she had to go all the way over to the main part of the hotel for us? We would never know); so I thanked her with my devastating smile that has cheered up so many hapless waitresses over the years.
The ‘cabaret’ for the night (for want of a better word) was a band called Vibrancy which we were told was Dubai’s favourite band from the Jam Base Bar in Souk Madinat Jumeirah. (Did Jam Base have any other bands, I wondered?) 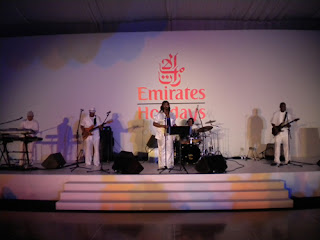 But the excitement was too much for Sushmita and me. We decided to let the young socialites trip the night away as we slipped out into the hot night air (my glasses immediately steaming up, necessitating a quick wipe over with my hankie)  and waited a mere four minutes as the valet parking attendant went to retrieve the car from 100 metres away.
As a marketing exercise, I’m not sure Emirates got value for money. But I’m sure the Atlantis’ bean counters will have been very happy from the evening. They, and a thousand stomachs of course.
Posted by Brian at 1:06 AM