Window on the World

One of the great things that my so-far short spell of living in China has thrown up is the whole new perspective on the world that I am getting. Truly when seen from an Asian point of view things look so different from the way one might see them in Europe or even the Middle East.

My window on the world, of course, is the plethora of TV stations that are broadcast in and around Beijing. My apartment block does not have satellite TV (indeed as I look out of my apartment windows I am hard pressed to see any satellite dishes pointing at the heavens). Instead we have 15 China Central TV channels (they actually broadcast a whole load more than that), 9 from Beijing TV, two from CETV, and channels from Tianjin, Yunnan, Guangxi, Chongqing, Sichuan, Liaonang, Hubei and Hebei, not to mention the kids channel Kaku.

This week CCTV News – the English language service broadcast from Beijing – gave fulsome coverage of the Murdochs’ grilling by British MPs in London. And excellent coverage it was too, despite the spelling mistakes on screen and the struggle some of the announcers had with pronouncing names that I had never previously imagined could have given anyone any problems. 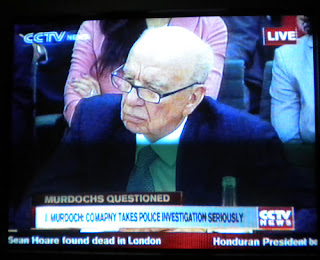 But I had to laugh when the line from London went down unexpectedly and the focus switched back to the Beijing studio where the anchorwoman Felicity Tan was busy munching away at what appeared to be a large piece of chewy gobstopper. My heart went out to her as she tried – and significantly failed – to surreptitiously slide it to the side of her mouth while attempting to recover her composure and fill air time.

As a former broadcaster myself, I could well sympathise, albeit that she had broken one of the cardinal rules of broadcasting: be prepared for the worst, since Murphy’s Law will guarantee that if something can possibly go wrong, it undoubtedly will!

But more excitement was to come when a member of the public assaulted poor Rupert M with what appeared to be shaving cream. (Murdoch’s Chinese wife Wendi Deng became an overnight sensation in Beijing as she lashed out at the would be attacker.) How the Chinese technicians at CCTV must have revelled in this visual treat. Within minutes they had formed a 12 second video loop of the assault which they played over and over again as a background to opinion interviews aired after the grilling. I counted the outtake being replayed at least 25 times non stop before getting loop fatigue and moving on to see what other channels had to offer.

Over on CCTV3 (中央综艺) which is described as an Arts Channel, they had a game show called Happy Dictionary… 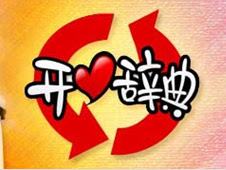 … which, despite it all being in Chinese (naturally), was gripping to watch. Here in the studio was a collection of identical twins and identical triplets all competing to see who were the most similar, not just in looks, but in thought and deeds too.

Two brothers were asked to dance in time to some syncopated music – a totally unedifying spectacle, but amazing in that when both their scores were assessed a large 八十 (80) appeared on screen, not once, but twice to indicate both had scored identically.

A triad of female triplets were given question and answer sessions using the Who Wants to be a Millionaire format, to see how similar their answers were to one another. Two more brothers were asked to draw from shouted instructions on opposite sides of a large white board and their scribblings compared. And a pair of girls with mahogany coloured hair were encouraged to sing together, before being asked some personal questions. 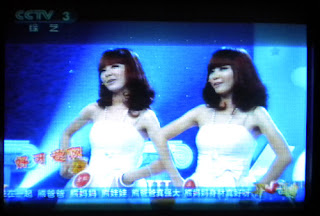 It was at this point that it struck me quite forcibly how thick these two girls were. I mean, until the moment they actually opened their mouths they acted the part of perfect screen candy for the producers. But oh my…. Once they started to talk, their voices gave the game away, while their gormless expressions just added to the desire one had to slap them round their chops and tell them to get a life FGS!

Yes, here was a couple talking an incomprehensible language (to me at any rate); yet so much meaning could be deduced simply by reading their body language and listening to their gormless voices. In the audience their mother was in tears – though whether this was a result of being overcome with pride or embarrassment it was hard to tell.

The big news this week in China was without doubt the retirement of 7’ 6” (2.29m) basketball superstar Yao Ming, who played for the Houston Rockets over eight seasons, but had missed 250 regular-season games over the past six years due to injury.

Of course the TV stations gave wall to wall coverage for most of the week. BTV 体育 (BTV’s sports channel) in particular went overboard in reflecting on every aspect of his life … 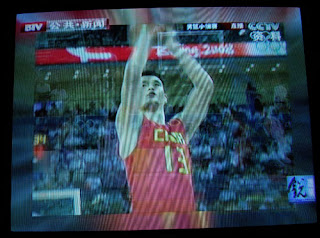 but for me the headline of the week came from China Daily which splashed END OF THE MING DYNASTY across its front page and CIAO YAO inside.

The other big news was the 60th anniversary of the “peaceful liberation of Tibet by the China People’s Liberation Army” – a well rehearsed phrase which was used over and over again as the TV stations showed endless history programmes, travelogues and documentaries about Tibet. 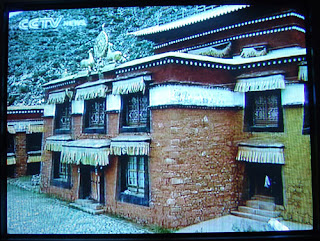 Just days before, Beijing had complained bitterly about President Obama’s meeting with the Dalai Lama and there was plenty of studio debate on the pros and cons of this diplomatic snub. In the event, the coverage given to the anniversary celebrations themselves was somewhat unremarkable and consisted of a number of speeches in front of Lhasa’s Potala Palace by Vice President Xi Jinping and others from the good and the great. But I have to say I learned a great deal about Tibet that I never knew before.

Back to my TV surfing, and next I happened upon 中央音乐 – CCTV 15 – the music channel. And much to my surprise they were airing a best-of-Bollywood programme. 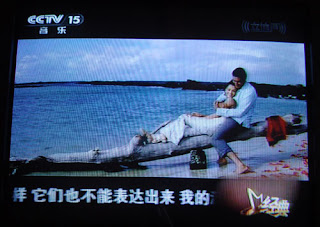 Well, why ever not? I have so far only met one Indian in Beijing, and I have no idea how popular Bollywood is over here, but it certainly showed that China can be as diverse in its musical coverage as anything found in the west.

Following the Bollywood extravangaza, the next programme featured the massed choirs of the People’s Liberation Army. I have no idea how good they are as fighters, but boy, can they sing! 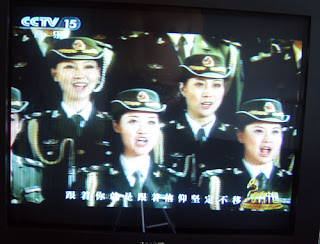 The military actually has its own TV channel in the form of CCTV7 中央军事 农业, which it shares with programmes about agriculture. If you time it right, you can even watch programmes explaining the finer points about the workings of nuclear warheads 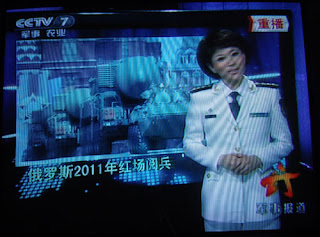 But for me, one of the best channels has to be CCTV11 - 中央戏曲, the Opera Channel. Here you will find wall-to-wall coverage of Peking Opera with performances, documentaries and, I discovered, game shows and lessons in the finer details of producing the sound of a strangulated cat. 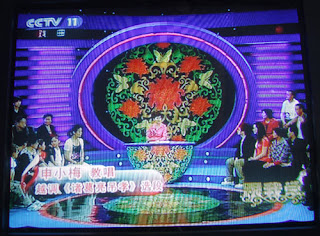 In a programme that had remarkable similarity to Nachle Ve on NDTV (New Delhi TV – which actually comes from Mumbai!) in which self styled Queen of Bollywood, Saroj Khan teaches young hopefuls to do simple dance routines, here was a Queen of Peking Opera leading a studio audience in trying their luck at caterwauling and discovering how difficult it actually is. There was even a cut away to a male opera ‘singer’ sitting in a primary school teaching the poor brats in the finer arts of opera (kittenerwauling???).

Yes, diversity is alive and well in Beijing and if you have enough channels on your TV, the world really is your oyster.

But forgive me if I stop at this juncture for one of my favourite programmes has just started on the goggle box. Anyone else like to try their hand at Peking Opera Karaoke? 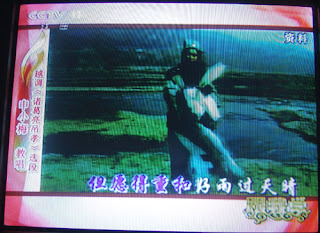