You know how it is with statesmen around the world. They’re always remembered for something they might have said, regardless of what else they did to change the course of history.

“No rest for the wicked” could no doubt have been applied to the sayings of Joseph Stalin; whilst “No paint, no gain” could have been attributed to that infamous interior decorator from Braunau, Herr Adolf Hitler.

“You are not a real man, if you have not climbed the Great Wall of China.” – Now that IS something that can be attributed to Mao Zedong, the Great Helmsman. And being a true man in every sense of the world, I thought it was about time I went to pay another visit.

The Great Wall of China was actually started around 220BC during the Qin dynasty when China was unified for the first time under Emperor Qin Shuihuang. The impending threat of Ghenghis Khan during the Jin dynasty in the 12th century spurred further construction; and it was reinforced with stone brick and battlements during the Ming dynasty two centuries later.

Despite the colossal enterprise, the Wall was pretty useless as a defence. There were inevitable gaps along its 8000+km length and Genghis - canny Mongol that he was – decided not to be a gentleman and instead led his tartar army through one of the gaps and captured Beijing in 1215; (you have to admire their sauce!)

I had read somewhere on the Net that as well as the infamous 919 bus that trundles out of BJ to the northwest, there is also a train service that leaves from Beijing North station and completes the journey to Badaling in 55 minutes.

Now, it is useful to know a few things if contemplating this method of transport. The first thing is that many maps still show Beijing North by its old name which is Xizhimen Station. And if you Google on the subject you are likely to come up with so many differing sets of instructions that you end up none the wiser.

“From Beijing North, take the S2 train which runs almost hourly. The train is quite under-utilised, thus I do not foresee pre-booking is necessary,” wrote one helpful soul, whom I could willingly strangle.

“On exiting the metro, follow signs in English to Beijing North Station.” – Another helpful person who would also be up top of my list of people to be strangled or certainly flogged as there wasn’t a single sign (in English) in sight.

But being a determined soul, and with the help of my Garmin GPS, I found my way to the station, and (eventually) found the ticket office (outside and to the right of the main entrance, since you are not allowed into the station without a ticket).

I waited patiently in the queue for 45 minutes – and must have moved forward all of 5 metres in that time. Up on the wall, an electronic display was not particularly helpful… 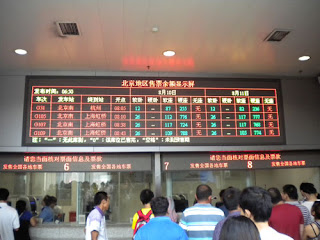 … and when I saw what I found out later were a Spaniard and three French people being told to go away by the ticket office, I discovered that not only had we not got a pre-pass (obtainable from a kiosk outside the outside ticket office) to allow us the right to buy a ticket in the first place, but all the places had already been sold for the entire day anyway; and as you cannot buy these tickets in advance either, “you could always try your luck at 6am tomorrow”.

But ‘true men’ do not throw in the towel so easily. It was time to tackle the 919 once again. This bus leaves from Deshengmen bus station and a quick metro ride to Jishuitan on Line 2, followed by a 10 minute walk saw your hero standing at the requisite place. 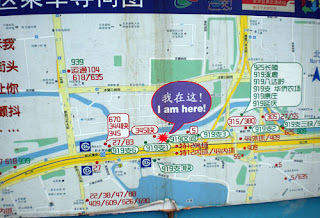 Now, I mentioned the word ‘infamous’ when referring to the 919. And this is because there is not one 919 bus. There are loads of them – some of which are express buses, some go via different routes, some stop at every lay-by – and again they are not for the faint hearted.

The trick is not to try asking one of the officious looking employees of the bus company, but instead to follow everyone else – the bus with the longest queue is undoubtedly the one you want. 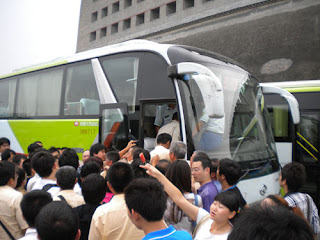 It goes without saying that this is where ‘true men’ (NOT ‘true gentlemen’) have the upper hand, as the frenzy to get on one of the buses is akin to feeding time at London Zoo. Why this should be I have no idea, as the buses queue up one after the other, fill their innards with exuberant Chinese, and drive off as the next one pulls in. A queue that looked about 500 metres long took all of 20 minutes for your favourite blogger to find a seat on the bus.

A Bruenhilde look-alike (with slinky eyes) swaggered down the bus handing out tickets for the princely sum of 12RMB (about £1.10) – at which point I knew I was on the right 919, as the slow bus reputedly costs only 7RMB.

One hour and 20 minutes later we pulled into a massive car park and at the far end the bus pulled up and everyone fought to be first through the doors.

There was a ticket office close by where they were happy to relieve you of the princely sum of 45RMB in return for a postcard-ticket that surely would have fallen foul of the advertising standards watchdogs had it been sold in Europe. 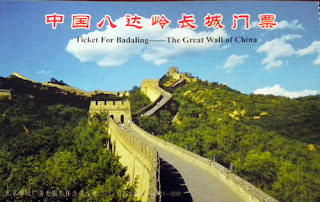 A little further up the road there were police SWAT teams standing by in case of trouble (maybe they were watching somewhat belatedly for invading Mongols); and it soon became clear why they were there… 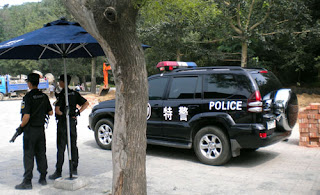 Up through an archway and there to the right was the main ticket office, swamped with eager visitors who obviously had not seen the earlier ticket office or had decided to chance their luck. I smiled a knowing smile, fought my way around them and headed for the electronic turnstiles. 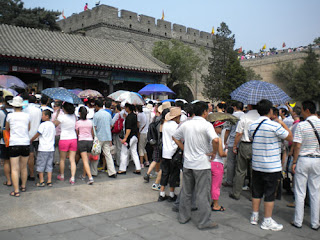 Lonely Planet warns that the mere mention of Badaling sends a shudder down the spine of hardcore wall walkers. Following in the footsteps of Nixon, Thatcher, Reagan, Gorbachev and HM the Q, one passes by tacky souvenir stalls and t-shirt hawkers, and mobs of sightseers.

In fact you are more than likely to have an eye poked out with the numbers of umbrellas protecting their carriers from the smog-covered sun. If you’re lucky you might even see a few bits of the wall between the relentless bottoms and puffing bodies struggling up and down the ramparts. 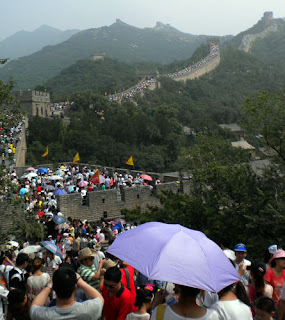 Not that this takes away from the grand spectacle, mind you, and the smog/mist might even be a blessing in that you can imagine the wall in its pristine loveliness as you pose in front of one of the long straight sections, rather than see it for it really is – a long snake of human flotsam weaving its way into the distance. 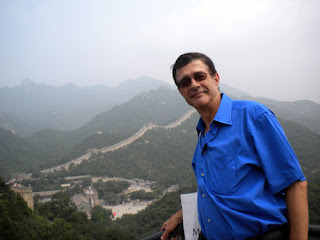 Of course, this is China, so no-one should be surprised by the sheer numbers of families who have come ready prepared and decide to have a picnic on the battlements as anxious tourists sidestep their way around them. 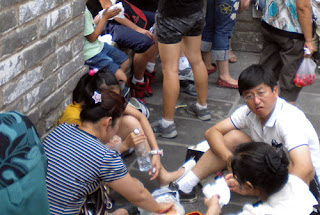 Up and down the wall, there are classy litter bins that the Chinese are encouraged to use. No doubt the invading Mongols all those centuries ago just dropped their ice-lolly wrappers on the ground as the Chinese were unlikely to have provided litter bins in the non-wall sections; and today’s visitors don’t do much better as the majority of bins remain empty, while an army of litter sweepers fight their way through the heaving mass of bodies. 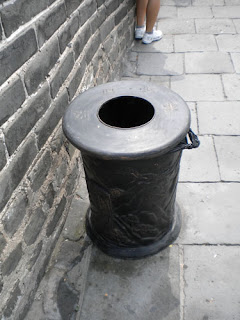 Here too are a plethora of cameras – how the Jin Chinese must have wished they had installed them in those wall gaps to get a pre-warning of the invading tartars! 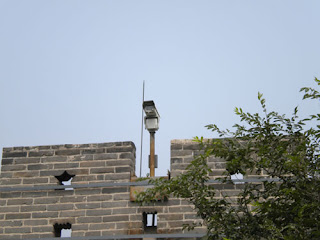 There is even a disabled lift installed to help people with wheel chairs get access to the wall, though how they are expected to cope with the endless steps and steep slopes is anyone’s guess. I couldn’t find anyone who was able to confirm that the next few years will see the installation of a Stannah stair lift at Badaling. 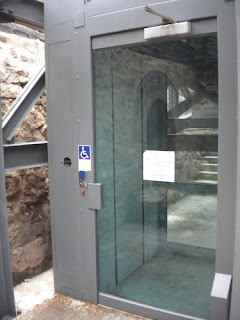 For those of a less strong disposition, there has even been built a mini-Great Wall – perhaps so tourists ‘of a certain age’ can still claim to have been on one of the great wonders of the world without actually having to exert the effort that comes with their visit. 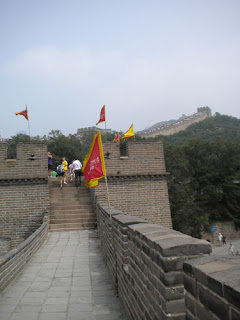 And for those with a puerile sense of humour, there are plenty of silly photo opportunities – such as posing with flowers (wall flowers???) coming out of your head.

Be advised, however, that a visit to the Great Wall is a strenuous day out. Not everyone can take the pace… 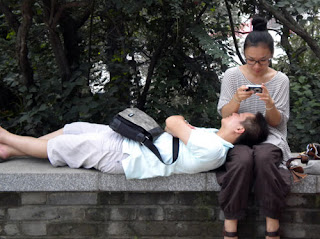 … as was also witnessed by the sounds of gentle snoring coming from all corners of the 919 heading homeward bound and back once again to the stark reality of life in BJ. 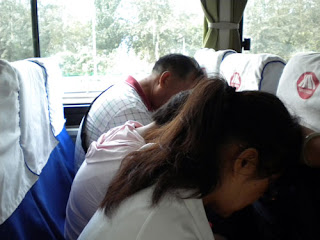