天鹅湖 Makes a Splash in BJ

I was swigging back my fourth cup of Lipton’s Yellow Label of the day, wondering where on earth I was gonna get any inspiration for the latest tome I am penning for my publisher, when my Blackberry made a welcome interruption. It was a friend, who gushed down the phone "Do you fancy going to see Swan Lake this evening."
It turns out the Russian National Ballet Theatre (alias 俄罗斯国家芭蕾舞团) were in town and her family had bought tickets for 天鹅湖 (or should that be Лебединое озеро?) only to find her husband had a flight that evening and couldn’t go. Would I like to make up the foursome?
I certainly didn’t need to be asked a second time and was already accepting the invitation when it was pointed out that no-one actually knew where it was taking place. The tickets were all printed in Chinese (what a surprise!) and although it translated 场馆 as ‘Venue’, what it didn’t do was to translate that all important information: 天桥剧场 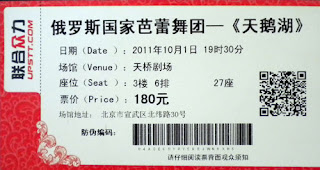 But they don’t call me Boy Wonder for nothing; and five minutes spent on a mixture of Google, Google Translate and Google Maps meant I was able to say – with near certainty – that the 天桥剧场 was about 2 kms from the nearest Beijing Subway station at 前门 on Line 四 – or to put it another way, we had to find the Tianqiao Theatre some 2kms south of Qianmen on Line 4 of the metro.
Now, 2kms would normally take me a conservative 20 minutes to cover; but what we mustn’t forget here is that I was accompanying three females wearing what looked like extremely uncomfortable shoes (why on earth do women suffer so much for fashion?). But I guess God was smiling on us as a taxi pulled over to drop off some passengers at the subway, right opposite where we were; so with a quick 您好 and a repetition of that all important information - 天桥剧场 – as I waved one of the theatre’s tickets under the nose of said taxi driver (just in case he didn’t understand 'Tianqiao Theatre' spoken in the vernacular), we were on our way.
The Tianqiao looked like it had been built in the 1960s or 70s. It wasn’t particularly attractive, but then neither was it particularly ugly to look at either. I guess the word 'functional' probably sums it up style-wise. Inside there was a large bronze artwork, giving the clue that this venue was often used for ballet. 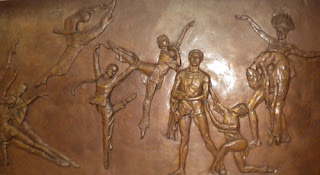 The first gong had already been sounded by the time we started to walk up the stairs to the third floor (the Chinese use the American system, so third floor in China = second floor in Europe); but I guess women are women the world over and I was not surprised that all three immediately headed off to the loo as the second gong was sounding. (The system here is that three sets of gongs act as a count down to getting everyone in their seats on time.)
As the third gong started, I could hear quick footsteps from the Ladies, and amazingly we were all in our seats before the lights faded down.
As is common in China, I discovered, they don’t see the necessity of having a live orchestra to accompany the ballet, so a near-perfect recording of Tchaikowsky’s masterpiece was blasted out in glorious compressed mono as a blanket of sound hit you full frontal, leaving you no room to escape. It was a shame, really, as the compression did terrible things to the instruments, and I thought to myself that one of the famous flute solos sounded as if it was being played on an ocarina.
Of course we all know the story of Swan Lake – of how Odette, the Swan Queen informs the young Prince Siegfried that an evil sorcerer, Von Rothbart, who so happens to be disguised as the prince’s mentor, has turned her and the other girls into swans and that the lake was formed by the tears of their parents' weeping.
Errr… OK, I have to plead ignorance. I actually didn’t know the story; and it wouldn’t have helped to have bought a programme since a) there weren’t any, but b) if there had been they would have been in Chinese anyway! Everyone in our party of four had assumed that one of the others would know the story (surely everyone knows it? Well, perhaps not) and one of our party, who had even seen the film Black Swan not a few weeks ago, couldn’t actually remember the plot.
So throughout the evening I kept wondering why there was what looked remarkably like a cormorant dancing with the white swan queen, and why the famous Pas de Deux looked like it had come straight out of Fiddler on the Roof.
Mind you the choreography was pretty hot stuff. Even Busby Berkeley would have been proud of some of the numbers. The Russian National Ballet Theatre (founded in Moscow during the transitional period of Perestroika in the late 1980s) did a pretty good job, albeit that there was a mixture of excellence from the solo dancers combined with one or two B-rated chorus girls – including one girl who surely must have been a last minute stand-in for someone who had gone sick. (Maybe she was normally the wardrobe mistress?) Not only was she plump (yes, really – have you EVER seen a plump ballerina???) but she was also top-heavy (have you ever seen a top-heavy ballerina???) and she was about five inches taller than the other girls. (And dare I say it - she looked like a man in drag!) If this had been the good old days of the communist Soviet Union, one would have assumed she was the obligatory KGB agent infiltrated into the ranks of the dancers to keep an eye open for possible dissent and asylum seekers. Certainly she was no delicate swan, that’s for sure.
The male dancers, however, caught many an admiring glance from the females in the audience. I could have sworn that the size of their cod-pieces was directly proportional to the star rating of each dancer, since Prince Siegfried seemed incredibly well endowed for someone passing himself off as a 21-year-old; while Von Rothbart looked like he would probably have to turn to the Viagra bottle to satisfy his chosen partner.
These were Russian dancers through and through – not only could you tell by looking at the faces of the ‘swans’, who all looked like they had put in a good day’s work down on the local collective, but the guys to a man had rippling muscles coursing up and down their legs. And don’t mention their buttocks! I kid you not, you could crack open a walnut by asking one of them to clench his bum!
In true Chinese fashion, cameras and cell phones were out in force with people taking pictures throughout the performance. The theatre’s usherettes, though, obviously had in their job description the fact that they had to suppress this type of behaviour, and red pencil beams from their torches could be seen criss-crossing the auditorium as they shone their lights directly into the lenses of the cameras in order to discourage such behaviour, shame the individuals and generally show who was boss. Recalcitrant individuals might even prompt some of the usherettes to work their way along the seating rows and end up having an altercation with the said offenders.
One particularly obnoxious man sitting behind me was texting from his mobile throughout the performance and receiving endless replies – all with the volume on his phone turned up to maximum. But this type of behaviour was obviously acceptable to the Stalinesque usherettes, who never gave him a second glance; and the word ‘shhhh’ said with forced clarity is obviously something that the average Beijinger simply doesn’t understand (maybe, as Google Translate now tells me, because 嘘 should be pronounced ‘shi’, not ‘shhh’).
The dancers were adept at milking the audience for every last drop of applause; and the Chinese, who are obviously well rehearsed in this particular talent, duly obliged. 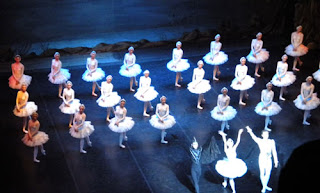 All in all, then, a fun evening was had by all. As the performance didn’t end until just after 10pm, and as it was a good half hour’s walk to the nearest subway, and as the last trains run at around 10.45, it meant that I again had to practise my Mandarin on a hapless taxi driver who must have thought twice about picking up this foreign devil at the end of a busy day.
I still don’t know why a cormorant was dancing first with a white swan and then with a black swan, but I guess that is something I will need to Google in the morning. Everyone seemed to be humming some of Tchaikowsky’s catchy little numbers played on that ocarina as they left the theatre; and I guess that is as good an indication as any that the performance was a success.