There was a young man from Darjeeling
Who travelled from Barking to Ealing
When it said on the door
Don't spit on the floor
He immediately spat on the ceiling!
Every nationality has its customs and taboos; and what is considered socially acceptable in one country may be shunned in another part of the world. Over the last six months I have come to like my Chinese hosts a lot; but one habit here that is guaranteed to upset practically every westerner without fail is their hosts' penchant for spitting in the street. As one hears the grrrrrrahhhhhh sound followed by their gobbing to the floor, westerners turn away in disgust. 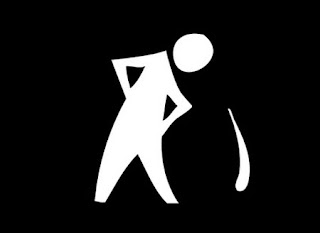 I know, of course, that people spit all over Asia. From India to Indonesia, for instance, those who chew on betel leaf gob out their vile red saliva, staining the streets in the process. But the inhabitants of the Central Kingdom appear to have the greatest need to spit which they do at every available opportunity - women as well as men - and if you are of a more delicate disposition, your stomach will surely turn every time you set foot outside your front door.
Is it so necessary to spit? In Hong Kong, for instance, they have cracked down on this practice - especially in the metro, where notices are prominently displayed banning this foul habit. 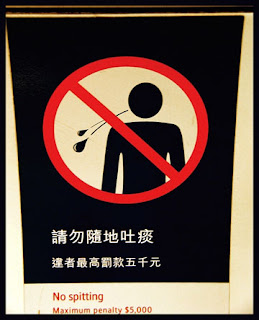 Shanghai, too, is slowly getting the message. 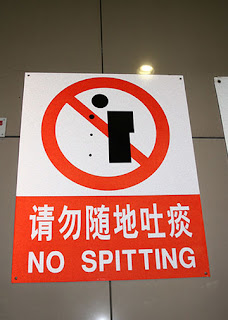 But to suggest to a Beijinger that he should desist would be a total waste of time. It is his birthright, nay his duty no less to gob for the glory of China.
I have to remind myself that until around 70 years ago spitting was considered quite normal in Europe as well. But following a particularly bad outbreak of tuberculosis in the 1940s (which can be spread by spitting) the practice was banned in the UK by law, with a fixed penalty of £5 for those caught doing so. I well remember seeing "No Spitting" signs on the buses in London in the 1950s (and Défence de Cracher on the Paris Metro too).
Social attitudes towards spitting have changed greatly in Western Europe since the Middle Ages. A few centuries ago spitting in the street was as normal as tipping your chamber pot out of the window. Then, frequent spitting was part of everyday life, and at all levels of society it was thought ill-mannered to suck back saliva to avoid spitting. By the early 1700s, spitting had become seen as something which should be concealed, and by 1859 many viewed spitting on the floor or street as vulgar, especially in mixed company.
Spittoons were used openly during the 19th century to provide an acceptable outlet for spitters. Victorian cities apparently just stank - people vomited, urinated and spat in the street at will. Spittoons became far less common after the influenza epidemic of 1918, and their use has since virtually disappeared, though each justice of the Supreme Court of the United States continues to be provided with a personal cuspidor.
Now the "educated" public of Europe considers spitting in public a wholly obnoxious habit - a gruesome piece of anti-social behaviour. So it is one item of conversation over here that is guaranteed to get an identical response from all westerners. "How disgusting," they say. "Don't the Chinese know better than to behave like that?"
Even in America the general populace have been educated not to spit. Local bye-laws have been put in place across the country from west to east. "No person shall spit upon any sidewalk, street, highway, alley, the floor of any bus used for public transportation, theater, railway or public transportation depot or platform or the floor of any school house, church or public building of any kind," reads one such law in Virginia. 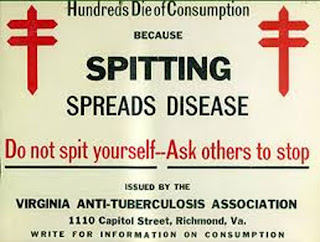 Sportsmen, of course, are a race apart. There's apparently some lout called Wayne Rooney who kicks a ball around a meadow or three for a living, and is famed for his disgusting behaviour. Tiger Woods, too, has been criticised for gobbing on the golf course. One the other hand, you will rarely see a rugby or cricket player spitting on the soil they are playing on. So why do soccer players do it all the time?
It got me wondering, though, what habits we Europeans have that upset the Chinese to the same degree. For 'as sure as eggs is eggs', I am sure we do some things that offend in equal measure