Searching for Peace in Shanghai And Eating Lunch Through A Straw

Without a doubt, one of the most visited – if not THE most visited – tourist attraction in Shanghai is the Yuyuan – or Garden of Peace & Happiness. It’s slap in the middle of a bazaar area where vendors target the tourists in a wide area of small streets and pretty lanes. 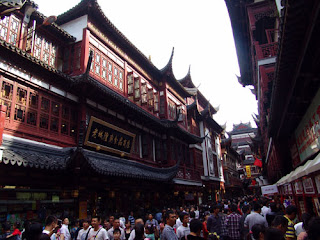 Before you even get to the gardens, your first port of call has to be the Huxinting teahouse (湖心亭茶楼) which sits in the middle of a man-made lake and is thought to have been the inspiration for the famous 'Blue Willow' china and tableware. Built in 1784 by cotton merchants as a brokerage house, it was converted in 1855 into the quintessential Chinese teahouse. A two-storey, five-sided pavilion with red walls and upward curved eaves, it is often visited by government officials to entertain foreign VIPs. It is the oldest teahouse in Shanghai still in operation.
The teahouse is elegantly decorated in traditional Chinese style, and can accomodate more than 200 patrons at one time. To get to it you cross the Jiuquqiao - a 9-right-angled bridge (for it’s a well known fact that devils and demons can’t turn corners!) – but today … China’s National Day holiday … the hoardes of visitors make even the thought of stepping inside a total non starter. 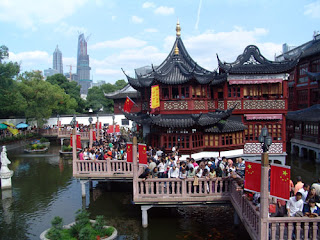 The entire square is a wonderful sight, even with the thousands pushing and shoving their way around. 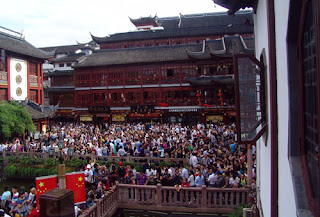 And once they have trudged round this square, it’s time to enter Yuyuan itself. And what a find! This has to be the best garden I have come across so far in China. It’s like stepping back in time and meandering through a maze of ponds and courtyards with traditional buildings, with always something to discover around every corner.
Yuyuan (豫园) was first conceived in 1559 during the Ming Dynasty by Pan Yunduan, the son of a minister, as a present for his father to enjoy in his old age. It was the largest and most prestigious of its era in Shanghai, but eventually its expense helped ruin the Pan family. It was then inherited by Zhang Zhaolin, the husband of Pan Yunduan's granddaughter, and then passed to different owners who renovated the increasingly decrepit grounds in 1760.
The gardens suffered a sad fate over the centuries, being extensively damaged during the Opium wars, the Taiping Rebellion, and by the Japanese in 1942 before being repaired by the Shanghai government from 1956 to 1961 when they were finally opened to the public. Today, they occupy an area of five acres and are divided into six general areas.
On first entering the garden, you come across a rockery, known appropriately as the Great Rockery. It’s 14 metres tall in places and is the largest as well as the oldest rockery in the southern stretches of the Yangtze River.

The paths are a delight to walk along, and you almost feel guilty stepping onto the little mosaic slabs that decorate your route throughout the park. 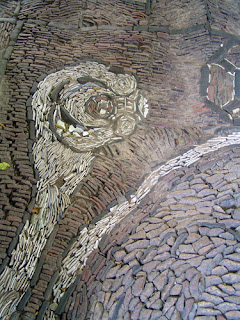 Each of the garden areas is separated by "dragon walls" with undulating grey tiled ridges, each terminating in a dragon's head. 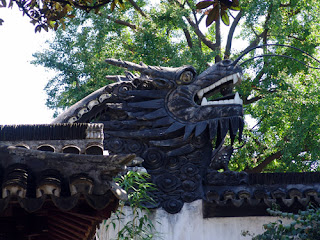 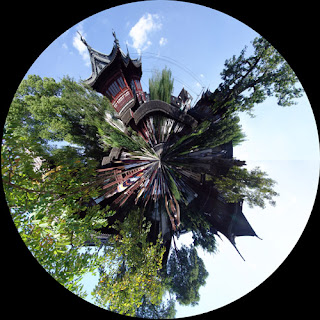 One of the centrepieces of the Garden is known as the Exquisite Jade Rock (玉玲珑), which I have to admit I hardly gave a second glance to when first setting eyes on it.
It’s about 4 metres high and weighs five tons - and it is certainly not jade! (Actually it is granite). It comes from Lake Tai in Wuxi, Jiangsu Province and is all wrinkled and full of holes (72 in all!) due to erosion by water.
The story goes that it was meant for the imperial palace in Beijing, but was salvaged after the boat that was carrying it sank off Shanghai. They say that if you burn a joss stick just below the rock, the smoke will magically float out from all of the holes. Similarly, when you pour water over the rock from above, the water will flow out from each hole creating a spectacular sight. 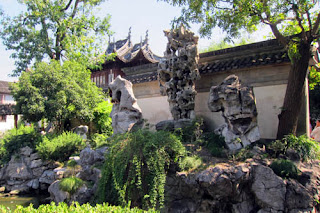 Rockery stones are to be found right throughout the Garden as one of the main features. It’s both very stark, whilst also feeling totally natural. It has the effect of pulling together the different elements of the Garden into one homogenous whole. Pretty it may not be; but impressive it certainly is! 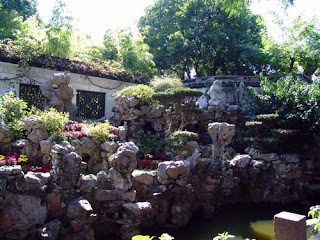 Even the bridges are supported in the water by more of this rockery stone. 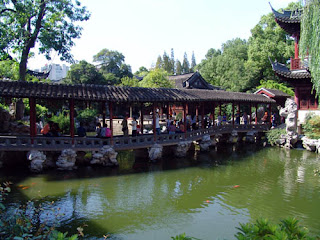 One thing I don’t like about Yuyuan, though, is some of the furniture on display – especially in the He Xu Hall. Yes, it looks like a wooden version of the rockery stone; and I’m sure it is very clever the way the wood has been worked into chairs. But I hate it. 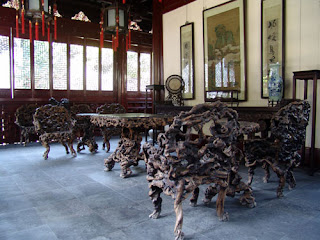 The Yuhua Hall, on the other hand, is furnished with some quite spectacular rosewood pieces from the Ming Dynasty, albeit that I think my situpon would start complaining if I had to sit on them for any length of time!. 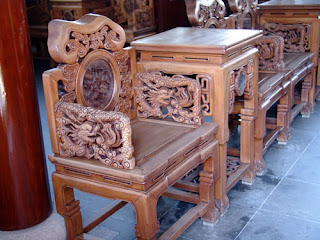 Craftsmanship is on display everywhere for all to see. Not just wooden furniture, but also some of the stone carvings, which are exquisite. 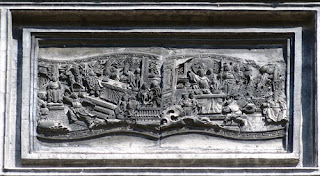 There’s also an ancient stage area which was built in 1888 and which is lavishly decorated with wood carvings framed in gold. Its ceiling has 22 rings joined by 20 curving lines and in the centre of the dome is a round mirror. Apparently this helps with the acoustics. They give concerts here as well – in fact there is even a flyer which invites one to sit and listen to music played on instruments made of china from Jingde Village. “The music of china is one of the great inventions in the Chinese history,” we are told “and Jingde Vilage (sic) is the celebrated capital of china in China. The categories of China instruments herein played are developed by the Jingde Villae (sic) Chorus”. Oh dear – I’m getting confused! 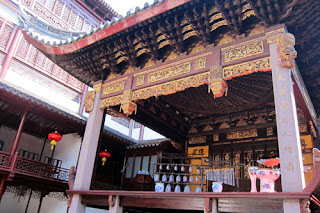 China china instruments not your cup of tea? (haha – china … cup of tea … get it?!) Never mind. Perhaps an exhibition entitled “Fanning the Summer while listening the Waves” is more your thing? 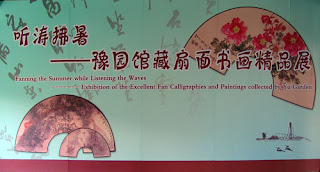 With well over 60 different fans on display, there is sure to be one or two you like.

This squirrel is one of my favourites, though I have yet to see a squirrel in China … 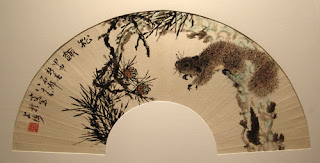 and as for this proud beastie, I think he’s splendid! 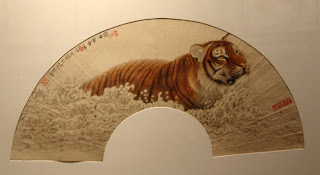 Anyone not speaking Chinese, and who didn’t know anything about Yuyuan might at first be taken with this sign. No, the 10,000 flowers is not a euphemism for the loo. It just so happens that Wanhua Chamber is in the same direction as the public conveniences!

Anyway, all good things must come to an end. And all this walking about has given your favourite blogger an appetite. Outside it is as crowded as ever… 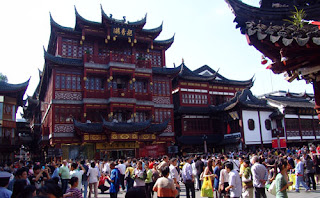 My friend MeiLing has been telling me about a wonderful dumpling restaurant called NanXiang and it’s a stone’s throw from Yuyuan’s front gate. This is the real deal and probably Shanghai’s most celebrated dumpling stop.
You can’t get more Shanghainese than this. If you think the crowds are bad outside, wait till you see them shove for a plateful of Shanghai dumplings.
Level 1 (ie ground level) is for take away only and on level 2 you share tables with anyone else. For Level 3 you may have to take out a mortgage to eat there and on Level 4 you WILL need a mortgage! Cheapo Blogger goes to level 2! 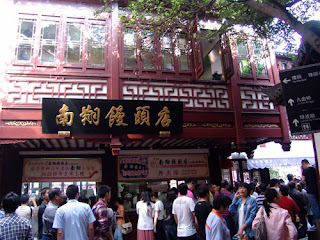 Traditionally, the dumplings are filled with seasoned minced pork or pork mixed with crab, but there are also vegetarian options, such as mushrooms and chives. The dumplings are placed in a bamboo basket - hence their name ("xiao long bao" or "little basket dumplings"). It takes roughly 10 minutes to steam a basket, and then they're ready to serve. Dip them in vinegar first and they are quite delicious.
They also taste great with a beer, though it’s not often I am expected to drink a can of tsingtao through a straw! 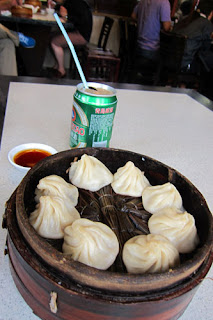 But the pièce de resistance has to be the soup dumplings. This is one of the signature dishes of Shanghai. I mean, I’ve heard of dumplings in soup… but soup in a dumpling?
They’re incredible. The dumpling should have a thin skin, but still be strong enough to hold in a spoonful of soup alongside a thick pork filling. In preparation, the chefs mix the pork filling with a cold jellied stock that melts during the steaming process.
And there you have it. As if it’s not enough to drink your beer through a straw, you are even expected to drink your dumpling through a straw! How cool is that (just so long as you don’t burn yourself on its innards, which are piping hot!)

As Pop Larkin would have said in HE Bates’ famous “Darling Buds of May” – Just Perfick!