Did GBS Ever Visit the Philippines?

We all know the expression that the way to a man's heart is through his stomach (as well as the rider that the best way to a woman's heart is a man with a sense of humour who will wash the dishes!); which probably means that men in the Philippines must feel truly loved.
As George Bernard Shaw wrote: There is no sincerer love than the love of food. If you adore your food, then the Phils is the place for you!
Your favourite blogger has just been out there to one of the Calamianes islands, north of Palawan – Busuanga to be specific – where he revelled in one of the seven deadly sins … viz, gluttony!
Every day you can find fresh fish on display of every size and shape. Even on Christmas Day when this pic was taken, there was plenty for sale, albeit the market was half empty. 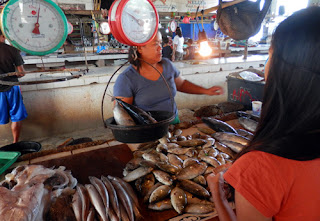 Naturally the fish market in the town of Coron is slap bang by the harbour. And fish are being continually churned out onto the marble slabs as you stand there, trying to avoid being dripped on by smelly fish water; but the best time to buy fish is, of course, early in the morning.

In the Philippines fish (or “isda”) come in many varieties. The country's tropical climate and coral reefs make its waters among the richest in marine life anywhere in the world. (According to some estimates 5% of the world's reef area is in Philippine waters and the marine fish in the area represent 20% of the total marine fish in the world.) So if you love seafood, you have definitely come to the right place.
Apparently the average Filipino consumes around 100 grams of fish or fish products every day making it the primary source of protein here. One of the best of these fish (not that I have tried that many, you understand!) has to be the “Maya-maya” or Red Snapper. And prepared Filipino style it’s just gorgeous. 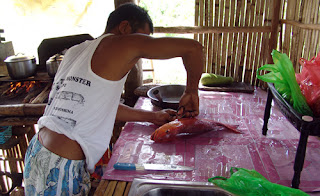 After being scaled and gutted… 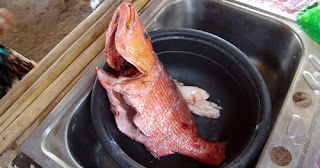 and then having loads of chopped ginger shoved up its innards, it is slowly steamed …
While that is going on, a plastic bag of pearl clam is slit open and prepared for fast frying in a wok, while prawns, too, are washed thoroughly and cooked until they turn a lurid red.
The Palawan region is meant to be one of the best for finding giant pearl clams, which can produce large white pearls though, of course, these are not as valuable as pearls from oysters or some other molluscs. About 70 percent of the country’s production of pearl comes from Palawan. 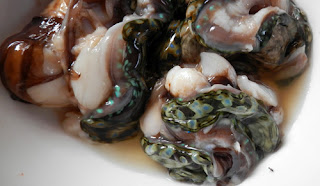 A great tasting vegetable to accompany this meal is a type of seaweed known as Sea grapes because of its shape. It is usually eaten raw (having first been thoroughly washed, of course) and dipped into vinegar into which chilli has been chopped up. Sliced up tomatoes are added to the seaweed to make a salad, while cucumber and raw carrot make up another accompanying dish.
Naturally, rice is also one of the staples for the meal which turns out to be really scrummy. Definitely a path has been found to my heart! 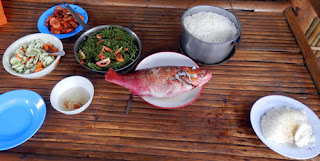 Everywhere you go, you will find fish on the menu. Like on this island hopping day out, relaxing with a beach-munch… 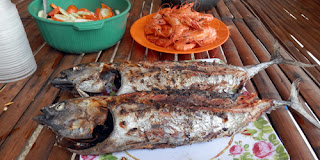 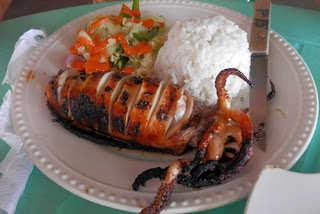 Not sure if the fish can remain fresh for when you are ready to eat it? No worries. There are all manner of dried fish for purchase in the market too – great if you want fish for breakfast, but you don’t have a fridge you can use… 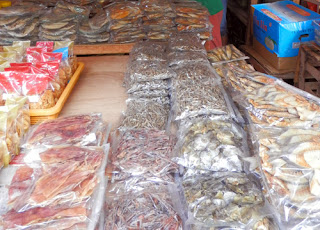 Of course, fish isn’t the only staple of everyone’s diet here. Fruit is plentiful right across the Philippines – be it the not-so-humble banana which seems to grow almost as a weed in just about everyone’s back garden… 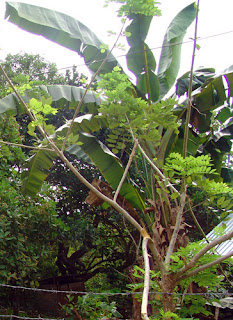 Or how about a jackfruit tree (which is actually a member of the mulberry family)? Its fruit is the largest tree-borne fruit which can reach as much as 36 kg in weight and grow up to 90 cm long by 50 cm in diameter. Its flavour is not unlike a tart banana.
In the Philippines, it is cooked with coconut milk, while in many other parts of South East Asia, the jackfruit is boiled and used in curries as a staple food. You can even eat the seeds by boiling then in salted water for about 25 minutes, after which they have a milky, sweet taste.
Apparently when a jackfruit is still green, it is similar in texture to chicken, making it an excellent vegetarian substitute for meat. But I have to admit that the only jackfruit I have ever eaten in the past is straight out of a can where it has been idling its time away lying in a bath of heavy syrup. 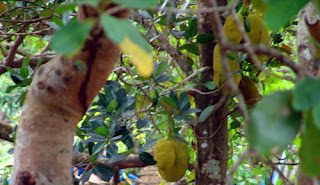 As for mangoes – well, when I used to work in the Middle East it was always rammed into me how the best mangoes in the world were the Alphonso variety that comes from India. Not so, dear Arabs! Come to the Phils and taste these ones! The Carabao Mango (or manggang kalabaw) is in the Guinness Book of World Records as the sweetest in the world. BTW did you know that the mango is closely related to the cashew? (Well, now you do!)
In some countries, a mango is peeled with a knife rather like you'd peel an apple. But you can’t do this with a Filipino mango as the flesh is too soft. Instead, Filipinos slice up a mango lengthwise, producing three flat slices. With the outer slices, you either scoop out the flesh with a spoon or make cubes using the "hedgehog" method – ie make a crisscross grid with a knife, turn the flesh out with your hands and then munch your way through the chunks.
Filipinos also love eating green, unripe mangoes, dipping thin slices into an anchovy paste, though I have to say I’m not so enamoured of this myself.
And here’s another wow-did-you-know-fact: It appears that the Philippines holds the record for the world’s biggest mango at 3.5 kilos.
And another one for your trivial pursuit questions… If you set fire every morning to dry leaves under a mango tree, it appears the smoke encourages mango trees to bear more fruit. 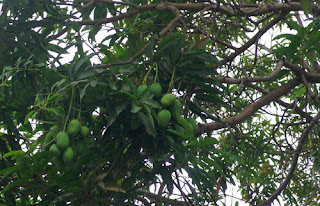 One fruit I have to admit in my ignorance I had never come across before is what is known locally as the Chico, otherwise known as the sapodilla. It ripens relatively quickly and bruises easily so it doesn’t really travel too well which is what I will now use as an excuse for my ignorance.
The Chico was introduced into the Philippine archipelago several hundred years ago when the Spaniards brought it along with them on their way to colonise the world.
This round, brown fruit is slightly smaller than a kiwi fruit and a little bigger than a golf ball. It tastes a little like a malted kiwi flavoured ice cream and has a distinctive sweet taste. The Chico actually contains so much sugar that people with diabetes are advised to avoid eating it. It also contains Vitamins A, B and C, and minerals such as iron, potassium, calcium, magnesium, phosphorous, selenium, copper and zinc. In other words, it’s pretty darned good for you too! Although the perceived wisdom is that chicos cannot be cooked, the Indonesians and Malays will tell you otherwise, stewing it, as they do, with lime juice or ginger. 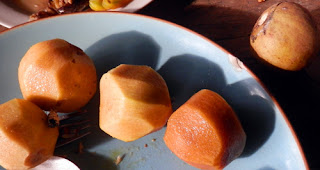 My feeling is that chico halves or quarters would also be great dipped in chocolate, rather as one does in Europe with strawberries.
But one thing you must be careful with is the seeds – very easy to remove, but if you eat them by mistake, you could end up with severe abdominal pain and vomiting.
Another fact I never knew until today is that a major by-product of the sapodilla tree is the gummy latex called "chicle", containing 15% rubber and 38% resin. For many years it was the chief ingredient in chewing gum. Processing consists of drying, melting, elimination of foreign matter, combining with other gums and resins, sweeteners and flavouring, then rolling into sheets and cutting into bite-sized pieces.
Over on the other side of the world, the dried sapodilla latex was chewed by Maya Indians and was introduced into the United States by the famous Mexican General Antonio Lopez de Santa Ana in about 1866. He contacted the American inventor Thomas Adams, and while Adams couldn't get chicle to work as rubber, he had the brilliant idea to turn it into a gum base and launched the chicle-based chewing-gum industry. In 1930, at the peak of production, nearly 14,000,000 lbs (6,363,636 kg) of chicle were imported into the US. 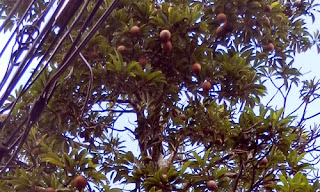 Whether you’re in to picking your own fruit, or simply buying it in the market, the choice on offer is large and the quality amazingly good. 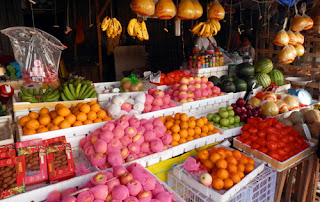 And that goes for vegetables too. 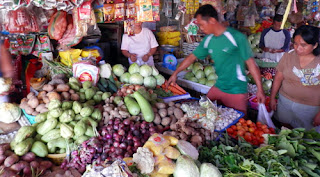 One of my favourite sweets, given to me on this trip was a fruit salad steeped in condensed milk and cream, together with a good dollop of sweet corn. To die for! I simply couldn’t get enough of it, and had to force myself to hold back in order to be seen to be leaving a little for the others! 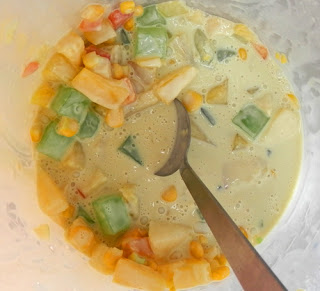 And that’s the thing. The Filipinos are renowned the world over as a very generous people; and it is all too easy to find oneself saying yes to an offer of food before thinking through what comes next.
Take the time I was asked if I fancied some chicken for supper. “That would be very nice,” I heard myself saying, just before a passing chicken - which until that moment had been simply strutting about, minding its own business - was grabbed by both legs and had its throat slit before being plucked and thrown into the pot. (I’ll bet it won’t make that same mistake in a hurry, that’s for sure!) 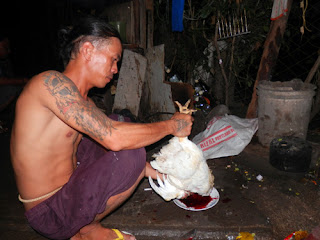 Well, you can’t get fresher than that. Later that evening I was given a lecture on the finer points of butchering a pig – to which I can only say I am glad I wasn’t offered pork for that meal!
For those of a more squeamish disposition (or who don’t have such careless birds strutting their way around the place) you can always stop at a roadside booth and get your chicken ready cooked… 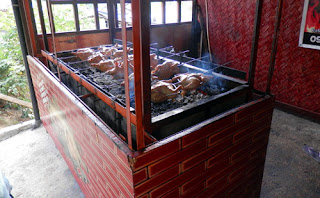 And finally, a word to the wise. Whatever your menu, you can be sure of one thing in the Philippines. Almost everything gets washed down really well by a bottle or two of the local brew – the most famous / popular / strongest of which is Red Horse. There’s nothing on the label to say how strong it is, but believe me … it is one of the strongest beers I have ever tasted. But you’ll just have to take my word on that. 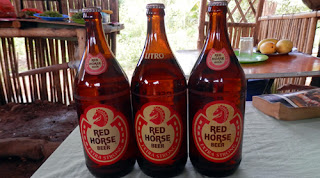