How On Earth Does BA Stay in Business?

What is the most dreadful job in the world? Surely top of the list must come the poor blighters who run the call centre for British Airways – possibly the call centre dealing with the most disgruntled customer complaints in the world.
You can imagine it can’t you – every time they answer the phone they just know someone is going to be shouting at them telling them what a crap airline BA is and demanding that they do something – ANYTHING FGS – just so long as they don’t get put back to the end of the queue yet again … assuming that is that they even managed to speak to a human being after having to listen to BA’s awful totally meaningless recorded platitudes for another hour and a half, or however long it took them to get through in the first place.

Let me make my position clear. I LOATHE British Airways and have loathed them for over three decades. Their rudeness, incompetence and lack of anything remotely resembling customer service makes me wonder how they can have remained in business so long. Unfortunately I had no choice when flying back from Beijing to the UK recently. And thus I made the acquaintance over the internet of one Mr Faisal Shaikh. I don’t feel angry with him – after all, he is only doing his job. But it’s what he stands for that I can’t stand.
Let me explain… I was booked on Etihad Airways, the “national airline of the UAE” (though many think that the Dubai-based airline Emirates better deserves this title). The flight was due to leave at just after midnight local time, but owing to a heavy storm that had worked its way up through China from the Philippines, the airport was closed down for eight hours and by the time we eventually took off it was clear we would never be able to make our connecting flight in Abu Dhabi.

Etihad acted efficiently – once we had reached Abu Dhabi (though in Beijing they were noticeable by the lack of any information they gave us.) As we deplaned, we were directed over to a customer service desk and within two minutes I was handed two new tickets – not directly to Manchester as I had originally planned, but to Heathrow and thence to Manchester via the planet’s least favourite airline.
Don’t worry, I was told; your luggage is already on its way and it should be with you when you reach Manchester.
Now, as everyone who knows me well will tell you, I’m a distrusting and cynical kind of guy. So when we finally arrived in Heathrow and managed to make my way over to the airport’s (truly ghastly) Terminal 5, the first thing I did was to go to British Airway’s “Customer Service” desk to check that my luggage would be safely forwarded to Manchester.
The girl behind the desk smiled at me (is this a first, I wonder? Maybe she was about to end her shift.) She checked her computer, dialed in my name and confirmed that I had two bags coming through and they would definitely be on the Manchester connection. Well, what more could one ask? My estimation of BA went up for their efficiency in being able to confirm with such accuracy what was happening to my luggage. Had they really turned over a new leaf?
Haha … as if….
On arrival at Manchester neither of my cases showed up on the baggage belt (what a surprise!). I reported to the baggage manager and was asked to fill in a long form – along with five other passengers who were similarly affected. Don’t worry, he said. No doubt they will turn up on the next flight. After all, there was only a 90 minute turn around at Heathrow.
I forbore to point out to him that efficient airports around the world manage turn around times much shorter than this – in particular Zurich airport which actually schedules its transit connections in under 45 minutes … and I have never found one of my bags missing the connecting flight there.
Sure enough after the next flight from LHR arrived – one and a half hours later – one of my bags magically appeared on the carousel, which is more than could be said for the bags of the other passengers who had waited in vain for their belongings. I felt particularly sorry for a Chinese guy who was about to start a six-month course at Lancaster University, now without any luggage whatsoever. 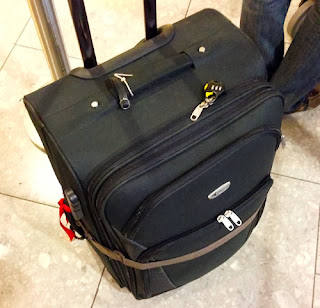 But of my other case there was no sign. Back to the baggage manager again. This time I was given a customer reference number and told to log in to a web site the following morning to see where the case was currently languishing.
BA, in common with most airlines, is a member of a World Tracer mechanism into which the numbers of lost bags the world over are entered and a computer magically matches them up with their grief-stricken owners on the other wide of the world.
With trembling hand and heart a-flutter I dial into the web site and enter my number. The form correctly tells me I have already got back one of my bags and, as I expected, confirms that the other has not been found. 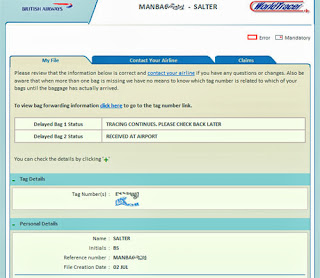 So that I can deal quickly with your claim for other missing items, please send me the receipt, card slip, insurance valuation, quotation or any other document to support the value of your missing property at the address mentioned below. Please mark our Customer Relations reference number on the letter.
Oh FGS another weasel scam. How many people do you know who keep all their receipts of clothes etc bought? I reply once more:
“Frankly I am disgusted by the way British Airways not only obviates itself from any responsibility for losing baggage, but also from then also making up its own rules for compensating its passengers so as to avoid paying proper compensation! Unsurprisingly I have no receipts for the items that were in my luggage. How many of your passengers after all keep all their receipts for items bought?”
But this cuts no ice with British Airways. According to them, it is surely our beholden duty to receipt everything we ever put into our luggage, otherwise…
In settling your claim we have taken into account the depreciation of your missing items. As you do not have any receipts, we have deducted 50% from the cost of the items listed.
Thank you again for contacting us and for giving me an opportunity to look at your case again. Your feedback is invaluable, without which we would not be able to address such issues. I hope our decision will not deter you from flying with us in the future.
Best regards, Faisal Shaikh, British Airways Customer Relations
Amazing! Does BA really think I will ever set foot in one of their miserable planes ever again? Am I alone? Am I a voice in the wilderness? It appears not, if a deluge of comments lifted from the web are anything to go by…
• Next time I need to travel business I will probably be asking my client specifically not to book me on a BA flight.
• You will not receive any responses from BA until you start sending them 20 emails/day. I will certainly not fly BA ever again in my lifetime!
• I have to submit an essay to do with the evaluation of British Airways and their customer care policies; something that has been extremely fun to do as i get to point out all the things they do wrong! You are probably the millionth person to tell me of just how awful the airline really is
• I have never come across a company that was so useless at dealing with complaints, what is funny is they told me they were unable to reply as they currently had 95,000 complaints, well that’s not a surprise BA your crap and no wonder your staff go on strike.
• When a person in a service department engages a customer, the goal should be to solve the problem, not recite meaningless phrases. This was our first trip aboard British Air and will no doubt be our last.
• A cautionary tale and note of assistance to all those who have suffered the misfortune of travelling with British Airways and experiencing their unique brand of so-called Customer Service: BA are an unmitigated disgrace when it comes to customer service and they totally ruined our wedding and honeymoon travel.
• We will never travel BA Again we will spend our money on a different airline that cares for their passengers and are polite and friendly towards us .
I think, Mr Shaikh, my point has been made. And yes, I know I should be feeling sorry for you and the awful job you are having to do… but forgive me. The fact is I don’t!
Posted by Brian at 8:03 AM