Steaming into York for a Unique Celebration

It’s been a while since I visited York. Of all the cities in England it has to be one of the most attractive and one that captivates visitors from all over the world. One of the fondest memories I have of it was during my campanology days way back when. I actually got to ring one of the cathedral bells which scared me shitless, but I was really proud to have done it. York Minster is a beautiful building – one of Britain’s best. 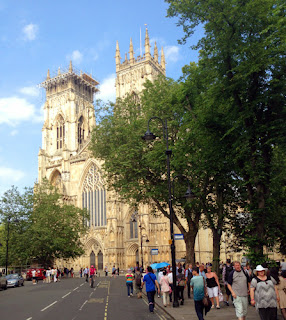 York is also one of those places steeped in history. Something I hadn’t realised was that Guy Fawkes – he of the gunpowder plot fame – was born here in 1570 and died 35 years later having been hung, drawn and quartered down in London for his part in the plot to blow up the Houses of Parliament. As a result, York is one of the few places in Britain where every November 5th you don’t find a “guy” sitting on top of the bonfires lit to celebrate bonfire night. 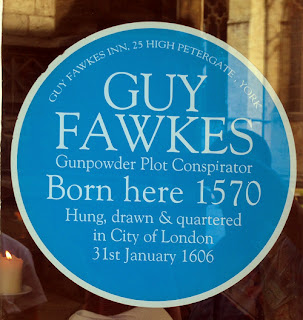 There are, of course, other sites to see – such as the old priory next the town’s museum, where people go to eat picnic lunches on the extensive lawns…

And don’t think for one moment that the local traders aren’t prepared for a sudden rush of custom – such as Caffè Nero where there is always additional seating available … well, perhaps not always available… 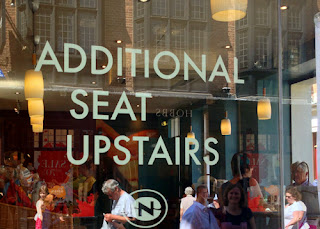 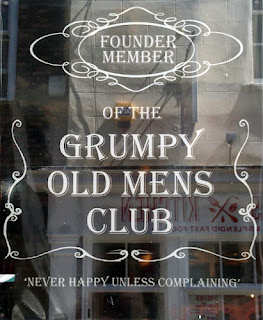 But that’s not why I am here today. Tuning in to the local Yorkshire news for the first time in decades, I learn that the previous weekend, York’s National Railway Museum witnessed record attendances. Now, I am not normally that much of a railway enthusiast – though I did pay my respects at Beijing’s two railway museums. But the TV tells me that rubber-neckers were cramming themselves in to this museum to witness…

….a unique event. For the first time ever, the museum has pulled together the last six surviving A4 steam locomotives from around the world under one roof.
The A4s were icons in their own right. Designed by Sir Nigel Gresley, they were launched in 1935 and achieved fame when Mallard LNER 4-6-2 class A4 No 4468 took the world record for steam traction in July 1938 when it hit the heady speed of 126mph – a record that has never been beaten to this day.
Mallard was the first A4 to be fitted with a Kylchap exhaust and double blast pipe and chimney, making the steam production more efficient. The loco reached its record on the east coast main line establishing Mallard as the fastest steam loco in the world.
It’s strange to think now that in those days the London and North Eastern Railways advertising department focussed on exploiting these modern services, promoting them as the most stylish way to travel in luxury, rather than on their record-breaking speed. 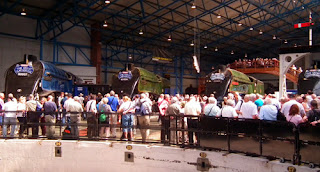 During their working lives the A4s could be seen in many liveries. Under the LNER they were painted grey, green, Garter Blue, Wartime Black, and returned to Garter Blue before nationalisation of the railways in 1948. Under British Rail, some A4s were even briefly to be found in purple livery before being painted in Express Passenger Blue and finally Brunswick Green. 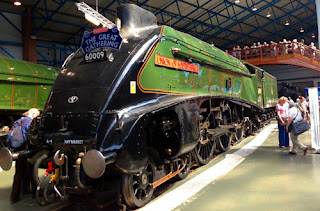 There’s no doubting it. They really are beautiful engines; and everyone at the museum wants to photograph them, get photographed with them, or try to draw them … 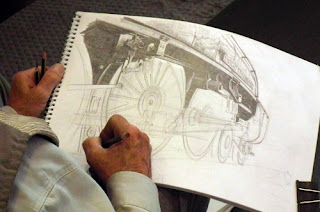 I should have mentioned, by the way, that entrance to this museum is free of charge. Apart from the A4s, there are so many other things to see that you can easily write off the best part of a day enjoying all the nostalgic memorabilia there is to be found on display. There’s even a section devoted to railway notices, written in abysmal grammar … so not a lot has changed in this particular area! 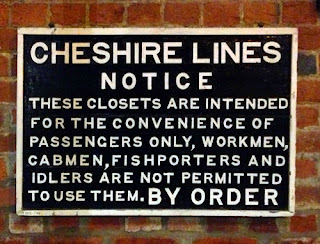 But there are also lots of trivial pursuit-type facts that you come across as you wander the corridors. For instance… have you ever wondered what the onboard chefs did if they ran out of supplies during the journey? 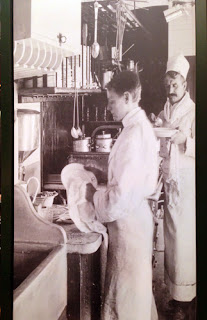 Easy! They hollowed out a potato, put a note inside and threw it out at the next signal box. The signaller then retrieved it, telegraphed up the line for new supplies and everything they needed would be waiting for them at the next station!
And did you know that in 1925 a total of 965 tons of meat and 779 tons of fish were eaten in the dining cars of Britain’s railways?
There are also samples here of metal-plate advertising that used to adorn the walls of railway stations. Golly, that Paris Hilton girl never wasted an opportunity! 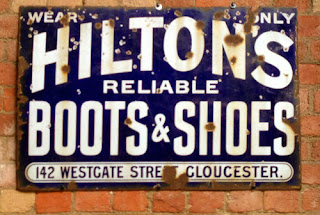 Round a corner, you come to the longest ever station name in Britain (perhaps even in the world, for all I know). The station is closed nowadays, though people still roll up to Anglesey to be photographed with the station sign that has been left up, as the Welsh know a good tourist attraction when they see it!

The place is called Llanfairpwllgwyngyllgogerychwyrndrobwllllantysiliogogogoch which, of course, means “Saint Mary's Church in the hollow of the white hazel near a rapid whirlpool and the Church of St. Tysilio of the red cave”. It rings a bell with you? Of course it does! It was used in the 1960's cult film Barbarella (starring Jane Fonda) as the password for Dildano's headquarters. It was listed in the Guinness Book of Records in 2002 and as an aside you might also like to know that the website with the longest valid domain name in the world is
llanfairpwllgwyngyllgogerychwyrndrobwllllantysiliogogogochuchaf.org.uk (the ending "uchaf" is the Welsh for "higher" or "upper", and refers to the upper (old) part of the village).

There is also a section of the museum devoted to royal trains – as well as some of the royal carriages that were merely attached to ordinary trains in the early days. 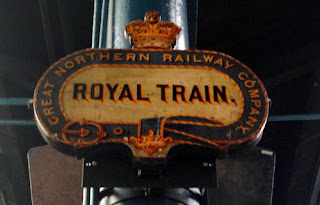 Queen Adelaide – she was Queen Victoria's aunt – was one of the first royals to travel by train in the 1840s. This carriage was designed for her and built with extra space at one end so she could lie down. Her carriage was simply attached to an ordinary passenger train. 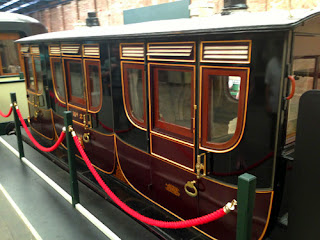 Of course, whenever a royal train pulled up at a station, protocol was everything; and the museum displays some lovely floor maps of where everyone was expected to stand when welcoming the royal travellers. 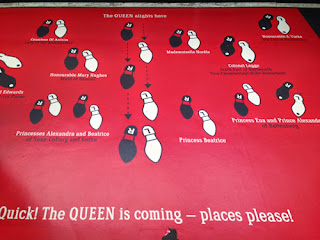 Not all the exhibits on display are that old, however. For instance there is a carriage and motor unit from Japan's famous bullet train which was launched on the high speed Shinkansen in 1964 and led the way for railways in the modern world.

And though it might seem a little incongruous, you’ll also find Thomas the Tank Engine waiting around to greet some of the younger visitors. 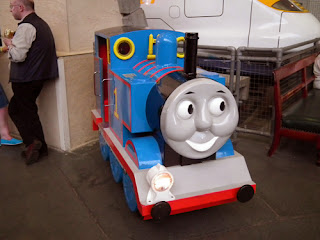 Not content with showing only the real thing, there are also models a-plenty, such as this rendition of the Planet loco which used to attain a top speed of 31mph in the 1830s. 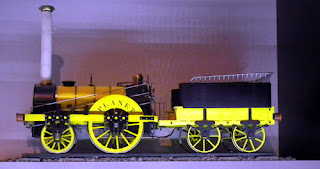 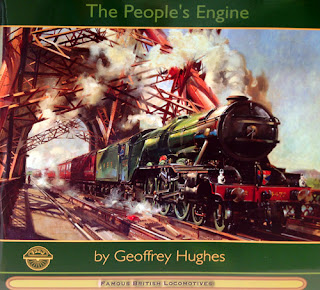 It was built in 1923, but right now it is taking a well earned rest and languishing in the museum's workshop for continued work to put the engine back into running order. 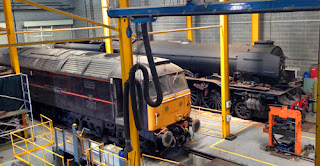 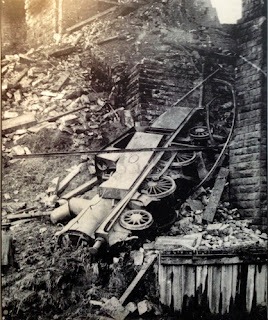 Actually, of all the museums in the world devoted to railways, the NRM has the largest collection. Some is on display in the galleries and the rest is in storage. The Warehouse is one of the museum’s largest storage areas but is not an exhibition. It is a working store; and many objects have not yet been restored, but are still being worked on.
Here’s a lovely shield from the Shanghai and Nanking Railway. OK – Nanking should really be called Nanjing – or Southern Capital; but it appears the British “knew better” and insisted on calling it Nanking! 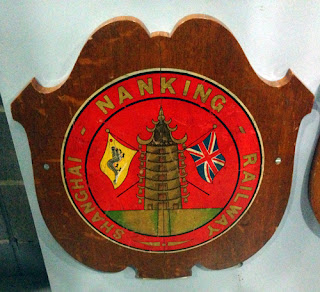 Here’s a shield from the British section of the Kowloon and Canton Railway – a railway I actually travelled on when I first went to Hong Kong in the 1970s when it was still firmly under British rule (and before the arrival of the MTR). 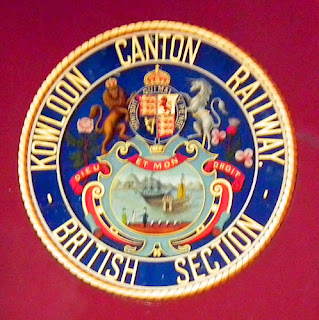 Harry Potter fans, too, will not be disappointed. In the Warehouse is the now (in)-famous sign that adorned the railway platform from where the kids set off to Hogwarts School. 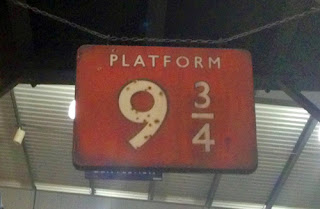 Eventually all good things must come to an end. It’s been a great day and one of the best value-for-money museums I have been to in a long time. I wait in hope under one of the display signs but no one comes up to throw their arms around me and smother me in kisses. I guess your favourite blogger will just have to keep on dreaming… 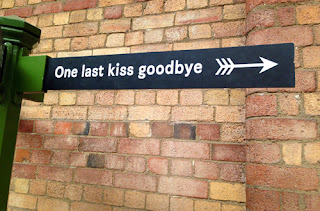