Can One Ever Get Fed Up With Gold?

One of the great things about Hong Kong that comes as a surprise to many first time visitors is that there are so many things to do and see in the SAR. The Hong Kong Tourist Board has for a long time done a sterling job of publishing leaflets and maps for tourists, and you can pick them up as you exit the baggage hall at HK airport, as well as in touristy places such as at Tsim Sha Tsui.
But one thing that has always mystified me is the lack of inclusion in the HKTB’s publications of, for me, one of the best things to go and see: The Ten Thousand Buddhas Monastery, or 萬佛寺– Man Fat Tszi in Chinese. There are plenty of temples and monasteries to see in Hong Kong, but I can guarantee that no others are like this one! The Big Buddha with its cable car on Lantau gets much more attention, but the Ten Thousand Buddhas wins hands down, as far as I am concerned.
It’s incredibly easy to get to and is less that 10 minutes walk from Sha Tin (沙田) station on the East Rail Line of the MTR. You leave Sha Tin MTR by exit B and turn left along the side of the bus terminal. Walk down the ramp and after a couple of minutes, you reach a turning opposite HomeSquare Mall. Turn left down Pai Tau Street and walk to the end. 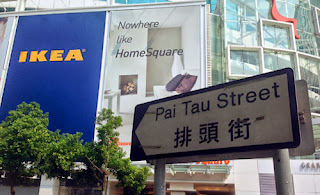 You’ll see a white temple-looking building ahead of you which is NOT what you are after! 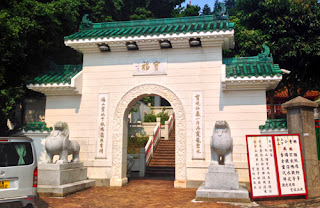 It’s quite cute in its own way, but this is Po Fook Hill Ancestral Halls where mourners burn incense in honour of deceased relatives, and it is not meant to be a tourist attraction.

To its right, next to the parking lot, you’ll see a path which is what you should be heading for. If you have your eyes peeled you might even catch sight of a small sign which confirms you are on the right track… 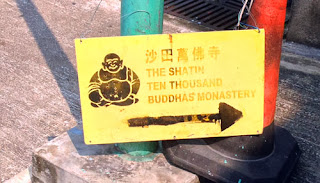 You are quite likely to see what look like monks begging in the area around the monastery, especially at the start of this path, but don’t be fooled. The Hong Kong Buddhist Association confirms that genuine monks are not allowed to beg here, and further up there are signs warning you of this.
One very monk-looking scam artist came up to me and insisted on shaking my hand and started to make small talk, before touching on the fact that he would be so grateful if I could give him some food, or donate some money if I didn’t have any food. I told him to take a hike and carried on walking! 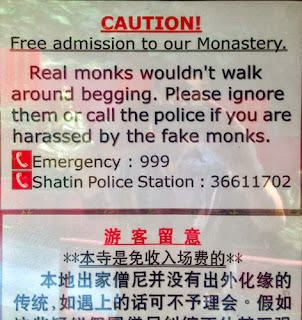 Now for the quirky fact that the Ten Thousand Buddhas Monastery is not an actual monastery at all, as there are no resident monks there, but this doesn’t detract from its attractions one iota. It was built by a devout Buddhist layman called Yuet Kai, who was born into a wealthy family in Kunming in southern China in 1878.  When he was 19 he decided to dedicate his life to Buddhism and in 1933, aged 55 he moved to Hong Kong to preach Buddhism in a local monastery. He planned to establish a Buddhist college when he accepted an estate from another pious Buddhist who was also a rich merchant. Sixteen years later he decided instead to found a monastery and so began the construction of the Ten Thousand Buddhas Monastery.
It took eight years to complete all the buildings and another ten years to finish the 12,800 Buddha statues. Construction was finished in 1957. Today, the Main Temple and the Pagoda of the Monastery are graded as Grade III Historic Buildings. If you’re wondering why it is called 10,000, when in reality there are many more Buddha statues, it is because in Cantonese tradition “ten thousand” simply represents a figurative term for an extremely large number!
Anyway, back to the entrance path, which actually is a steep uphill climb of 431 steps to the lower terraces of the Monastery. It takes some 20 minutes and some people who aren’t in great physical shape can find it exhausting. On both sides of the path are loads of golden Buddhas, each one unique and in a different pose. 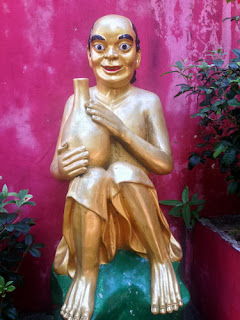 Don’t be surprised if you see some really devout people kneeling down every three steps or so as they make their way up the hill. 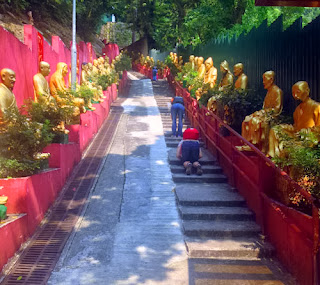 The Buddhas, come in all shapes and sizes. Some are fat, some thin; some are bald while others are hairy; some hold musical instruments, while others hold interesting objects, not all of which are easy to fathom out. 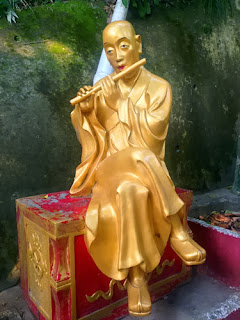 A quick calculation lets me know that for each of the 431 steps up the hill you will get to see around 30 Buddha statues in all, which I guess can’t be a bad deal! 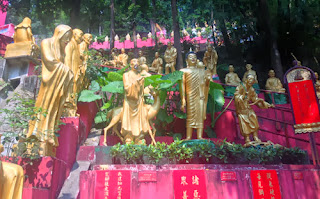 Along the path these 500 gold-painted plastic statues represent the experience of enlightenment, known as Arhan statues. Each face is entertaining or insane, depending on your view point. There’s even one which has small arms coming out of his eyes, which has to make it one of the weirdest in the whole complex. 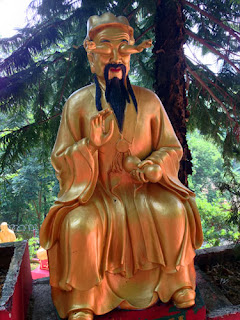 As you go higher and higher, the number of statues increases and they get more fantastical too.
This one appears to be telling the visitors that there is only a little bit more foot slogging to go… 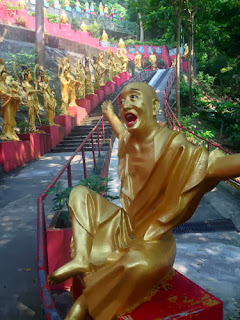 … while this smug one obviously thinks he is quite a clever dick riding on the back of a peacock. 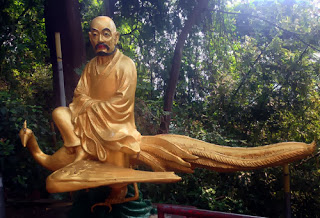 Eventually I reach the first of the two main levels, which are made up of two groups of architectural structures. On the lower level is the Main Hall (the actual 10,000 Buddha temple), together with a pagoda, two pavilions and a tower; on the upper level are four halls
In 1968 the monastery underwent substantial renovations when many of the statues were coated with pure gold. But almost 30 years later some of the buildings were damaged by landslides causing the site to be closed for over two years of reconstruction.

In the Main Hall you find the 12,800 tiny Buddha statuettes, but though they are small, they are still impressive. Again, each one is unique and they were made by Shanghai craftsmen and donated by worshippers over the decades. 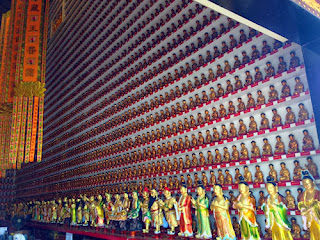 Surrounding the entrance to this temple, yet more gold paint… this time covering the animals of the Chinese zodiac – such as this tiger, which represents your favourite blogger’s birth year. 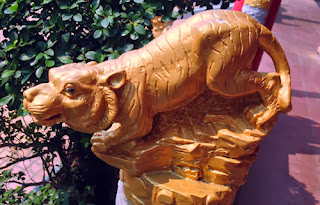 Here’s a golden rat, which is meant to be auspicious for wealth seeking believers. 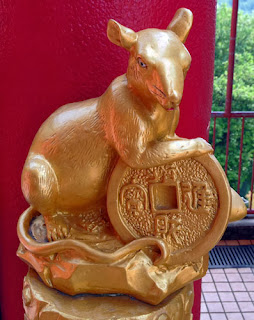 Between the Main Hall and the Pagoda you will find 18 painted, life-sized “Luohan” representing Buddha’s most important students. 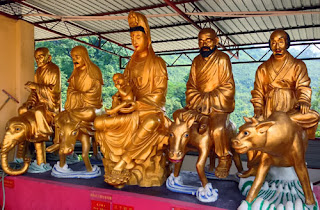 On this plateau, apart from the temple, there is plenty more to see. Next the hall is a vegetarian café which many have commented as being quite good, offering Cantonese snacks and tea, though it didn’t appeal to me, I’m afraid. Apparently it is open every day except Thursday.

Filipino visitors seem to be picked out for discrimination by signs written only in Tagalog. Apparently they have a reputation for using the temple grounds as a picnic spot which the powers that be take a dim view of! 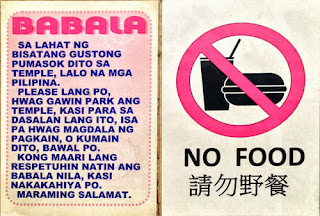 There are also signs warning everyone not to feed the monkeys, since the Sha Tin area and its surrounding hills are known as the home of wild monkeys. I never got to see a monkey, though, apart from one of the gilded statuettes. 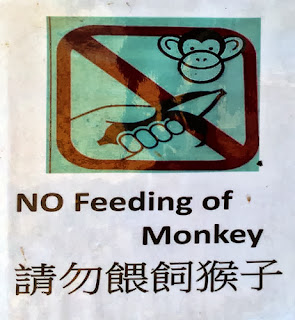 Connoisseurs of historical bank notes may well do a double take when they set eyes on the nine-storey pagoda, for which the monastery is also known.  It achieved fame when the Hong Kong and Shanghai Banking Corporation featured it on their 1985-1992 issue HK$100 note. 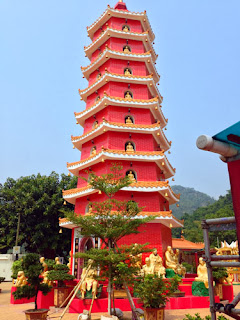 Beyond the pagoda is a pavilion with Wen Shu riding on a blue lion. 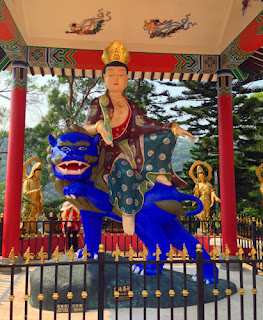 while to its side you can also see a white elephant belonging to Pu Xian – the Lord of Fire. 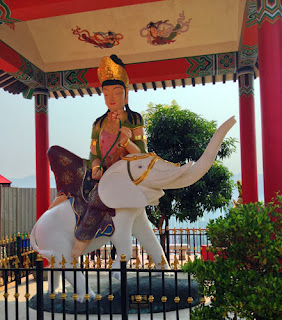 My favourite statue in the temple grounds, however, is this one of Guanyin with the Thousand Arms given to her to let her reach out to those in need. 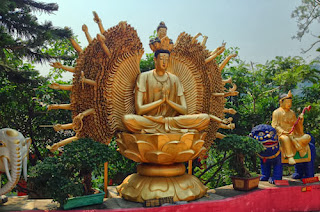 Moving on to the upper deck of the monastery complex, you find even more life-sized Arhan statues, and a few more temples as well, featuring mythological scenes and more miniatures. Reconstruction is still ongoing up here though. Perhaps the most impressive statues are these Arhans scattered across a knoll overlooking the city. 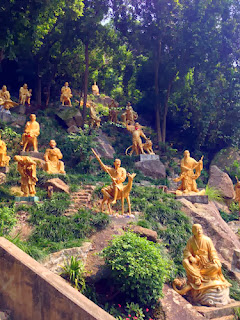 And staring down onto them is an ivory white Kwun Yam statue – a goddess riding a dragon who holds a .red orb in his throat 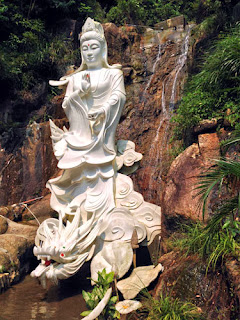 The poor tigers seem to get a pretty raw deal from these golden statues – I felt quite sorry for this little Tigger who doesn’t appear to be a happy bunny, despite sticking his tongue out at his tormenter. 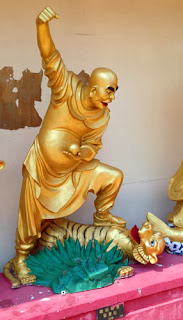 This Tig appears somewhat less accommodating and you can find him in a mini temple which also features a deity sitting on a large black horse. 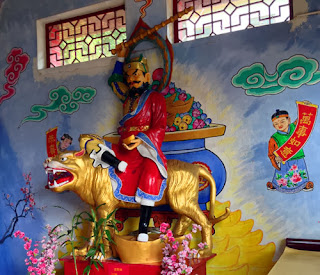 After a while you might find yourself getting somewhat tired of this excess of gold paint; but worry not – there are also loads of bonsai trees scattered around the grounds for your enjoyment… 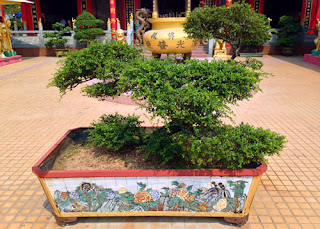 … not to mention the panoramic vistas over Sha Tin and the New Territories. 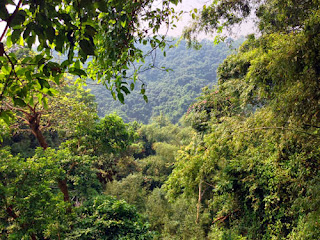 Admission to the Monastery is free and it is open every day from 9am to 5.30pm, unless there is heavy rain. Allow about an hour to 90 minutes to enjoy all there is to see here.
Posted by Brian at 7:11 AM