New Year’s Eve in China is one of those in-between days. You know. Just about everyone has left for the Spring Festival holiday in the world’s biggest annual migration, but the shops are still semi-open and everyone is waiting for the big day tomorrow.

Some of the shops, though seem to be lacking in any kind of business – such as the train ticret office, since presumably everyone has bought their ticrets by now and if they haven’t, there aren’t any more ticrets to be had anyway… 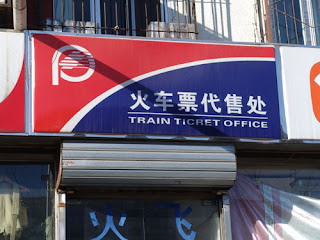 Others seem also to be getting few customers, perhaps because today the temperature is a heady minus 16 degrees Celsius, and there isn’t much of a market for iced water… 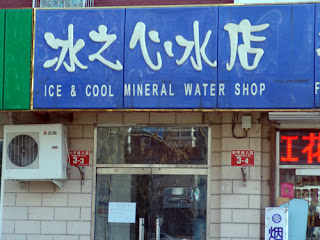 As with many public holidays around the world, Beijing has its fair share of fairs – normally referred to here as Temple Fairs, which have been a part of daily life for many hundreds of years. You can find them all over the city selling tat that you would not normally be seen dead with. There are displays of acrobats and musicians, cross-talk (a kind of mix between stand up comedy and rapping, which became popular in the Qing dynasty) and of course food stalls everywhere.

But your favourite blogger is ahead of the game. Unlike most of the Temple Fairs in Beijing which open tomorrow on New Year’s Day, there are a couple of fairs that are actually open today; so I head for Ditan Park, otherwise known as the Temple of the Earth Park, just up the road from the Yonghe Gong Lama Temple.

The Temple of Earth, otherwise known as the Temple of Fang Ze, was once the place where emperors of the Ming and Qing dynasties offered sacrifices to the God of Earth. This temple complex is now the largest of its kind in China, covering over 37 hectares and dates back to 1530.
It reflects the beliefs of the time that:
1. heaven is round and the earth is square (so it was built square-shaped)
2. heaven is blue and the earth is yellowish (so guess what colour it is!)
3. heaven is in the south and the earth is in the north (so of course this lies north of the Temple of Heaven)
But I doubt anyone really gives that a second thought as they make their way past the bored looking Mr Plod at the entrance… 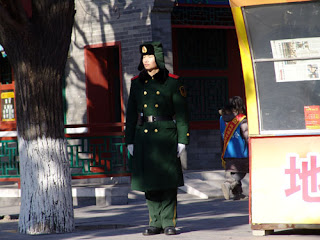 and rush to have their photograph taken with something that purports to be a dragon, since of course we are entering the dragon year – one of the most propitious times in the Chinese calendar. 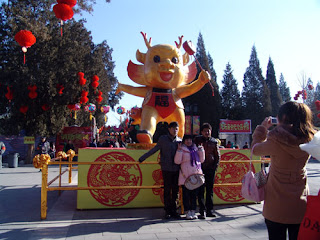 Others who are not so tat-minded decide to have their pictures taken under an arch of red and gold lanterns. 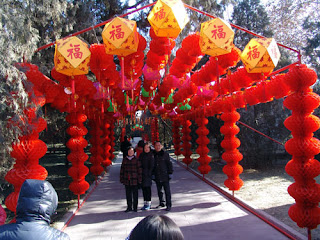 and then everyone heads for the tat stalls selling everything from dragons and silly hats to toys and puzzles and plastic 100-ton-mallets (for hitting people over the head with of course!). 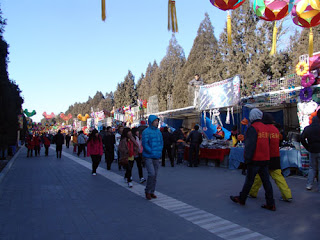 But wait… what have we here? A group of emperor’s flunkies standing around with an old cart? What’s up? 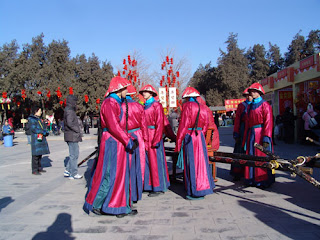 What’s up, of course, is a re-enactment of the imperial family’s traditional prayers for good harvests originally held here in the summer months. So you see, it’s actually quite educational coming here too!

Re-enactments aside, the park is also filled with musicians of varying standards, freezing their little fingers off while performing to the crowds. I feel quite sorry for this girl playing the er-hu who appears to be in the first stages of hyperthermia (well I can only assume that explains the standard of her playing). 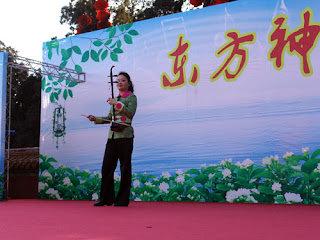 On another stage round the corner, a magician is performing the cutting-a-woman-in-little-bits act, although the woman is actually a very gay man, whose fingers that are sticking out from a hole in the cabinet are turning blue with frostbite. 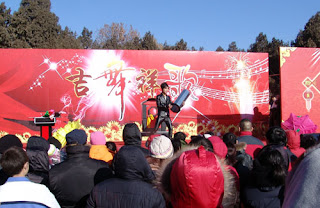 Red lanterns are everywhere, of course; and the grid section of streets, making up the park, are all lined with colourful banners and stalls. 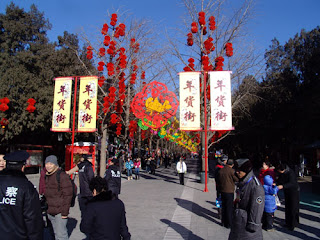 One range of merchandise that I notice is doing particularly well, are smurfs – presumably because their recent film has been a huge success at the box office. 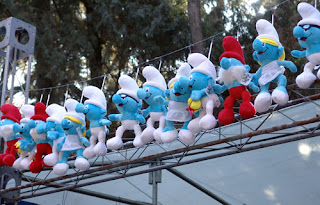 But a stall that attracts little interest displays house signs, which presumably fell off their allocated positions during a storm or whatever. Are these really collectables? Well, with my eBay experience I know all too well that one can sell practically anything to the masses! 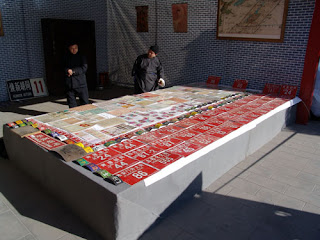 As I approach food alley, the cookers are warming up nicely and already attracting a small amount of passing interest; though soon it will be packed as the Chinese love to nibble in the street. 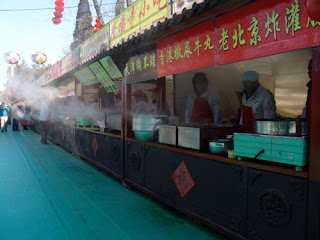 The local fire brigade is also there, proudly showing off its latest equipment; but practically no one gives them a second glance and when I snap a photo of them there is a look of thank-goodness-we’re-not-entirely-invisible written all over their faces. 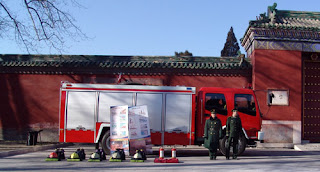 A small crowd gathers round some girls spinning plates on sticks. With perfect timing they twist their bodies and contort themselves into silly positions, all the while keeping those plates from falling to the ground. The crowd murmurs in awe. Amazing! 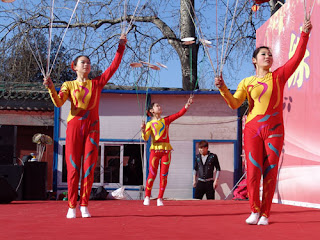 Or is it? One girl gives the game away as she leaves the stage. The plates are attached to the sticks! All they need to do is wiggle the sticks and it looks like they are in perfect control. The crowd, realizing it has been fooled, turn their backs and head off for other amusements. 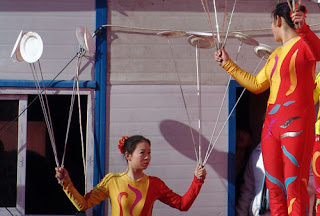 How about life-size dolls performing for the kids? Huh! In minus 16 degrees? You’re kidding. I count maybe half a dozen brave souls standing around to watch this pedestrian performance. 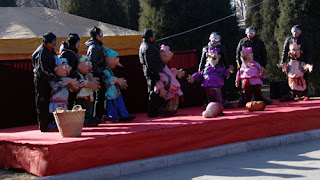 But parades are a different matter and over-the-top colourful floats are the very stuff of such fairs. 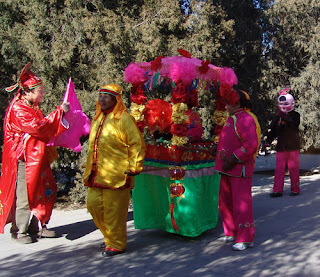 Even equestrian ladies with bright pink cheeks are a hit – though whether their cheeks are pink from the cold or from their makeup is debatable. 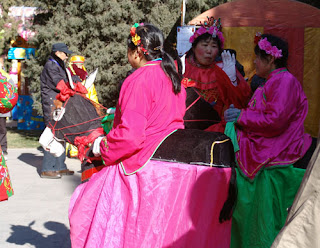 Dance troupes, too, are all the rage; and I watch for a couple of minutes before the cold forces me to continue on my way. 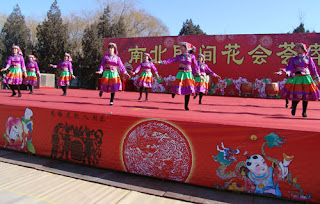 It’s been a fun-filled morning, but if I stay out here much longer I will turn into an icicle. It’s time to head for home and leave the park for others to enjoy. 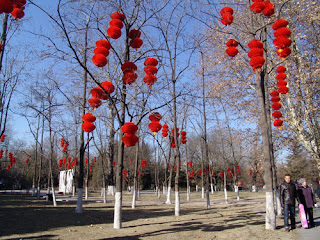