They say the best parties to go to are surprise parties.
So there I am sitting at my desk, minding my own business, scribbling away on some amazing column I am writing, when one of the girls turns round to me and asks “are you ready?”
“Ready for what,” I reply. “Ready for the party, of course,” she says. I look blank. She looks exasperated. “You do know it’s the department’s Spring Festival party this evening?”
If the truth be known, I have been hearing rumours about it for the past few weeks, but it turns out that no one has thought to actually tell the “foreign expert” sitting surrounded by all these Chinese girls that the party is actually today, or even where it is to be held. All the notices sent out about it have been in Chinese and I have long ago got tired of dropping every official company notification into Google Translate on the off chance that one day there will be something that actually affects little old me.
My harem of work colleagues are mortified. “Come with us. We’ll show you where it is. You can sit with us. No, you MUST sit with us.”
With about two minutes notice I bundle on my coat and follow them out to the lift and down into the cold outside where it is already minus five degrees. Did someone say Spring Festival? Thank god it isn’t a winter festival we are celebrating!
We jump into a cab which promptly goes in the wrong direction adding about 50% more to the fare by the time we eventually arrive at a Tibetan hotel not a kilometre from the office.

Despite the girls’ earlier insistence, I am told there is a place reserved for me on the “International Team” table. “Just look for the plaque on each table. It’ll be up near the front somewhere”.
Luckily another westerner is already sat down at the table – just as well when I read the sign: 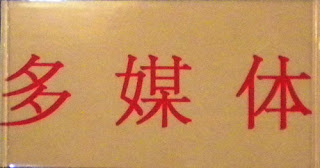 … which as everyone knows (well, everyone who can read Chinese, anyway) says Multimedia (thanks MeiLing!). But no worries. This really is the table we are meant to be at. For a start there are twice as many wine bottles than at other tables – always a sure fire giveaway! And none of your cheap muck either. This is one of the better Great Wall gut rotters – which is just as well as we are to find out a little later. 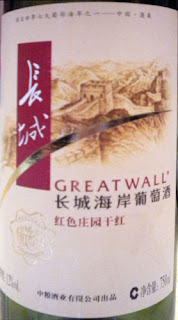 The room is quickly filling up. There must be around 25 tables each with ten places. I am well positioned just one table back from Top Table, round which are sat the good and the great. (I assume they are G&G, although in truth I only recognise two of them).
The evening starts off with a number of performances by groups of staff members. “A good way to get noticed by the top hierarchy”, goes the perceived wisdom, though in my experience it is sometimes better NOT to be noticed by the T.H. depending on how much of an idiot you are making of yourself.
But in the event everyone throws themselves into the mood of the evening with gusto… 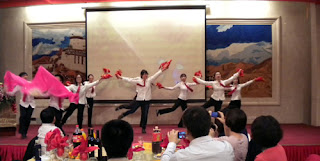 … albeit that some are a little less rehearsed than others. 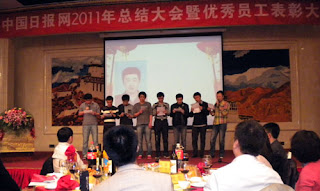 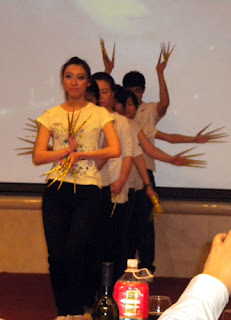 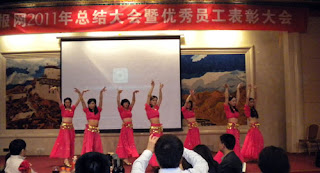 … or the guys who appear to have a gender imbalance problem...

… though no one worries about the apparent lack of talent in the girlie group as long as they wiggle their asses and show off their legs.

And what’s this? Karaoke sung by a group of Red Guards?

For me one of the highlights of the performances is a girl doing Peking Opera – and very well too. Not that I am an expert, you understand, but she appears to have strangled the requisite number of moggies to get that purrrrfect sound so loved by us P.O. aficionados. 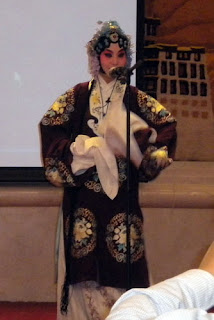 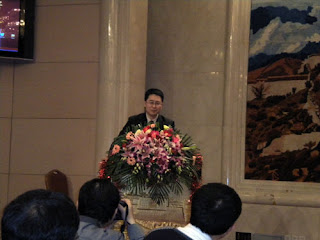 Mind you, as we are shown slide after slide of industry figures, and how our company did in the great scheme of things, I am glad to see it is not just our table that finds more interest in talking to one another than paying rapt attention. 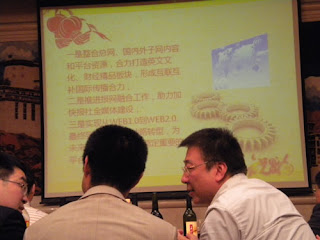 Finally it is time to eat. The Tibetan waitresses bring in plate after plateful of delicacies. First up, jellyfish cooked with mushroom – a surprisingly good combination as it turns out… 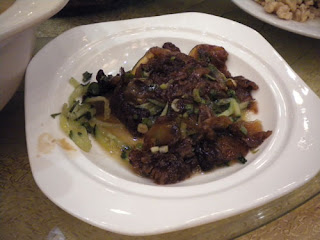 And of course, every Tibetan meal has to have yak meat, doesn’t it? Delicious when tossed with coriander and tofu. 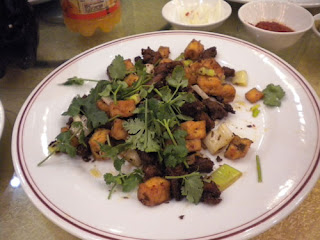 There are three soups to choose from, but the sharks fin soup, into which has been dropped a quail’s egg, is my favourite. No matter that the great Yao Ming has been on TV incessantly for the past few months trying to get people to stop eating this delicacy, (visions of sharks floating around in tanks, unable to swim without their fins) I’m afraid I thought it was frightfully good. 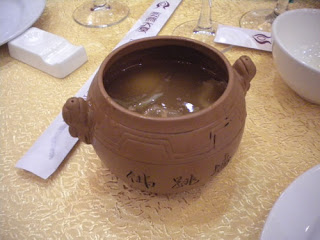 All the while the Tibetan waitresses hover over us and keep on replenishing the table lest we should even think for one second about holding back out of politeness. 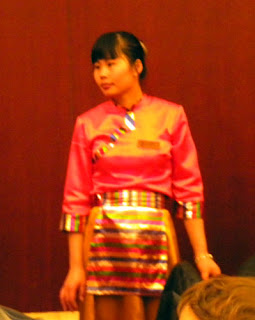 And then, it’s prize giving time. Not any old prizes, you understand; but a table groaning under the weight of microwave ovens, vacuum cleaners, mobile phones, and stuffed dragons.
But wait, what is this? Is that really my name being called out? A Golden Dragon award? Just for doing my job?
It appears that there are both golden and silver dragon awards, it being the start of the dragon year; last year one assumes they had golden and silver bunny awards.
There is my name on the screen. They have even spelled it correctly. I and a head of section are given Gold. Of course, this being China, everyone is a winner. But the other “foreign experts” only win Silver.
I am presented with a huge box inside of which is a cappuccino and espresso maker. The silver awardees get a slightly smaller coffee machine. I am flabbergasted. I am delighted. I am pleased as punch. I’m glad I came. 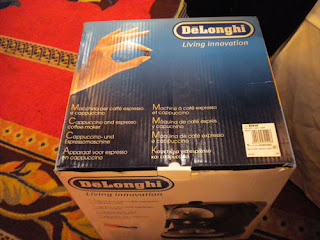 And then it is time for New Year toasting. Now, as you may know, the Chinese take their toasting quite seriously. The idea is that a table at a time does the circuit around the room, toasting all the other people. Do the maths. You could end up having to knock back some 250 toasts. Of course, you don’t. You take a little slurp of your wine after clinking glasses with maybe five or six people (always trying to remember to clink your glass lower than the person you are clinking with, to show respect for them).
It doesn’t take too long before you start to lose count of who you have clinked with and who is still waiting to be clinked. Better to clink a second time just to make sure.
And then there are the trouble makers. There’s always someone, isn’t there, who instead of wishing you a happy new dragon year decides to call out Gam Bai! In Chinese Gam Bai is like saying Cheers. It literally translates to bottom's up, but they take it all so seriously. You can't say, Gam Bai and not finish your drink, regardless of how much is in the glass.
So trust me to have just filled up my glass with a good slug of gut rotter when the head honcho – the Godfather-figure of the company - comes over to us and shouts Gam Bai. And if it is good enough for him, then everyone else too feels the need to get in on the act.
Gam Bai! Oh rather, my good man. Gam Bai! to you too.
Eventually I feel a little tap on my arm. Or is that two taps? My guardian angel(s) ask(s) me/us “are you ready?”. “Ready for what” I/we reply. She (they) look(s) exasperated.
“It’s time to go back to work. Had you forgotten?”
My G.A.s have decided to take a cab back to the office, but I could do with a little fresh air; and hoisting up my Golden Dragon award I stagger off into the cold night air (it’s now down to minus nine) and walk the kilometre back to the office where I am glad to pour myself a cup of Mr Nestlé’s favourite brew.
Ah yes. Work! How could I possibly have forgotten?