Santa Jostles with the Dragon

It’s January 22nd and still it appears that Christmas is more than just a passing memory. Although the Chinese New Year – referred to here as the Spring Festival – is almost upon us, Santa and his merry reindeer are still to be seen around town wishing us all a Merry Christmas from shop windows, hotels and in doorways, although it has to be said that I have noticed fewer Christmas trees in the past week… 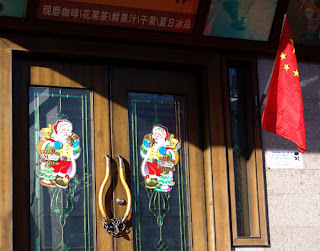 No doubt this is because Mr Claus is wrestling for space with the dragons and New Year greetings that are fast taking over his territory, though this morning in my street alone I counted 14 santas and 13 dragons.

As well as dragons, many establishments are hanging up red diamond-shaped fu (福) characters which literally mean "blessings and happiness". This sign is usually seen hanging upside down, since the Chinese word for "upside down" (倒) is homophonous with "arrive" (到) and so it symbolises the arrival of luck, happiness, and prosperity. 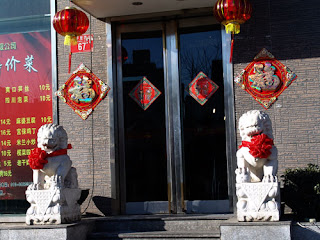 Of course the shops have been gearing themselves up for weeks now targeting shoppers with New Year cheer, such that it is impossible to escape this festival in any way whatsoever. 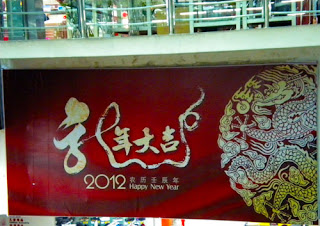 At work, we were given a hong bao (红包) or little red envelope with two store credit cards inside – to the tune of 500 kwai (approx ₤50) for one upmarket store, and another RMB 100 for a bakery chain.

Not being one to miss a bargain I have been tempted into the shops like everyone else, searching for must-buy items that I would normally never even consider purchasing! 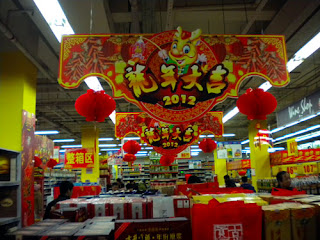 Most shops have been doing a very brisk trade – and even normally sedate stores (if a Chinese supermarket could ever be called “sedate”) work on the principle of pile-em-high-sell-em-cheap.

Of course, while inside, who can resist buying some kitsch to decorate their apartments from the kitsch corners that have sprung up everywhere? (Actually.. I can!) 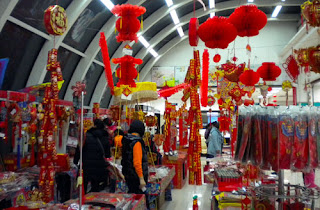 Anyone wanting just to buy their normal groceries has to work twice as hard fighting against the crush of eager Chinese. Thank goodness for the signs that can still be found everywhere guiding you to your chosen products.

OK, I have still to work out what is meant by “Nourish Food” – maybe it is the opposite of junk food? But it is a universally accepted term here – as can be seen in a similar sign in another supermarket.

As for “Expanded Foods” – don’t even ask! It’s about as clear to me as a “Functional Drink”. I’m dying to know what a dysfunctional drink is all about!

I am happy to see that my favourite sign in Wu Mart is still there to guide me to the toilet rolls. I mean, I never actually buy my bum fodder from there, but it still gives me a smile every time I pass it. 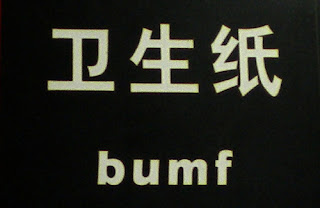 China, of course, is renowned for its Chinglish signs. Want to try your luck on the state lottery? Look no further…

Feel like playing with the overhead wires? Don’t even think about it! 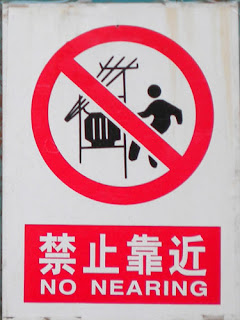 Afraid lest you might miss out on an all important sign? Well I guess it is possible to suffer from sign withdrawal symptoms, so the lovely Chinese take it upon themselves to put up a sign telling you where to find another sign!

I guess too that the Chinese must have been the originators of mission statements – those grand sounding slogans that western corporations were so keen to introduce in the 80s and 90s to their work forces – albeit that I have never met a single person who could ever tell me what the mission statement of their company actually was. But true to form, the Chinese stick them up everywhere, even on their pedestrian bridges. 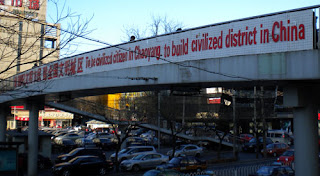 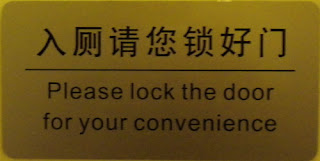 One of my favourite signs can be found close to the Sanlitun area which is so heavily frequented by westerners. So it is not surprising that they make a special effort with their signs in this area. Thank the Lord for Google Translate!

But I digress. As the New Year approaches, many shops and even more houses decorate their entrances with rhyming couplets called du lian (对联) - a pair of lines of poetry which adhere to certain rules and that express happy and hopeful thoughts for the coming year. 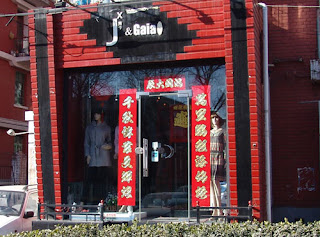 A couplet must adhere to strict rules. For instance both lines must have the same number of Chinese characters; the tone pattern of one line must be the inverse of the other; the meaning of the two lines needs to be related, with each pair of corresponding characters having related meanings too. Oh, and there is a “headline” section at the top which is meant to sum up what it is all about!

As almost everything is shut during the Spring Festival, the markets have been having a very busy time offloading all their produce to the customers who buy up box-loads of meat, vegetables and fruit… 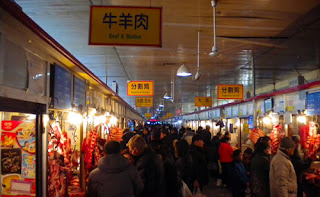 … while just in case there is anyone (such as me!) who still hasn’t bought a dragon or a fu or a du lian for his door, they’d better hurry up as stocks are limited. Or not, as the case may be. 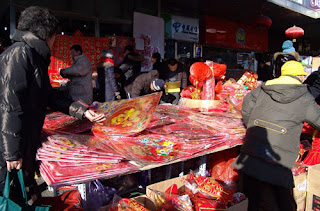 Roll on the Spring Festival.